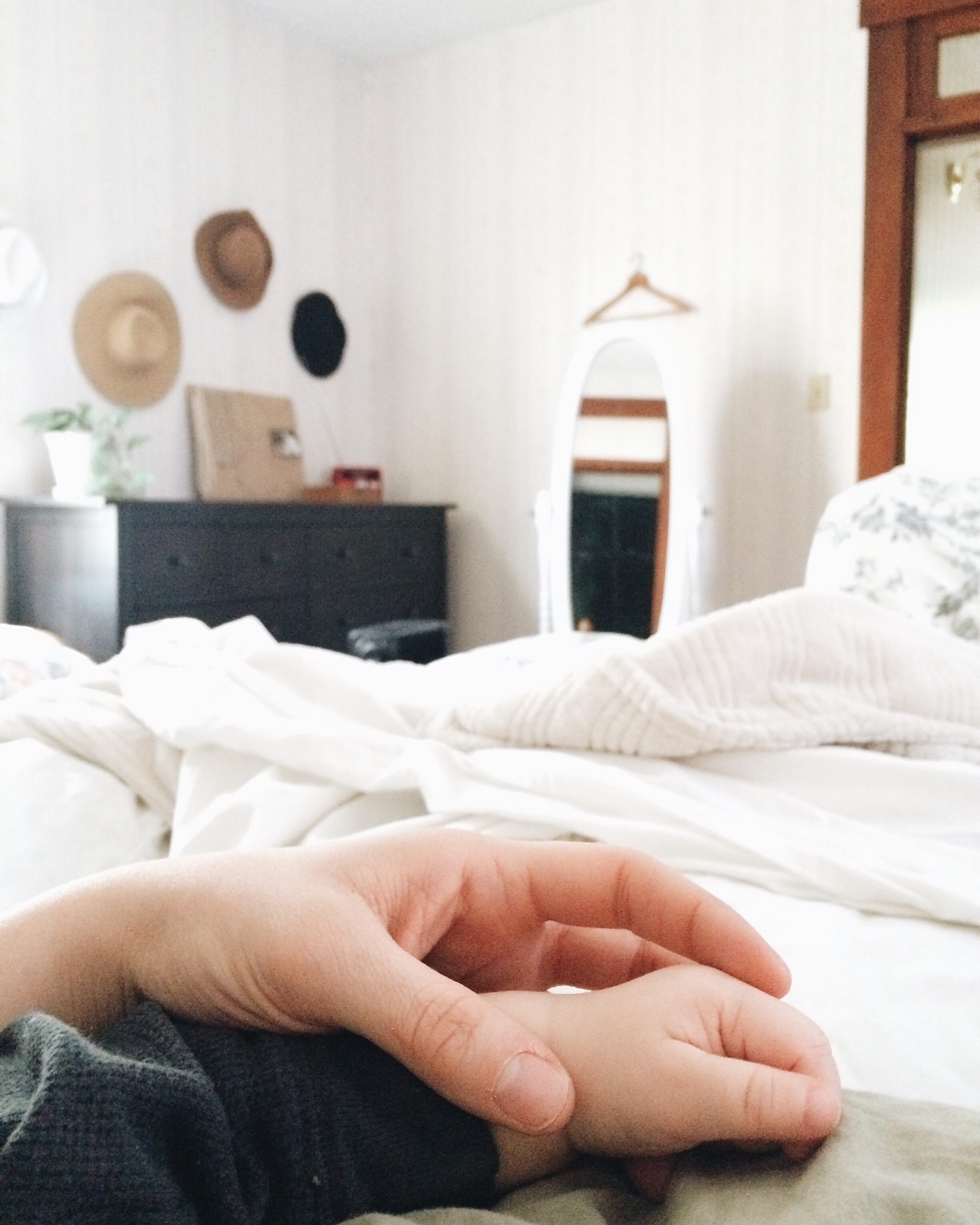 Such an exhausted topic (pun definitely intended) amidst all of the challenges and victories of motherhood — parenthood really.

And yet here I sit, again, pleading desperately to the gorgeous redheaded babe in the crook of my arm at 2:36 AM to please go back to sleep.

Then it begins. The Overanalyzing.

What is going on? Maybe it’s a growth spurt. Maybe he’s cutting teeth? Maybe that later nap is messing him up? Yes, yes. I must try and get him to get that last nap in a little earlier.

Or wait, I know. It was our trip! Our trip is the culprit. He was still sleeping through the night before we left for our trip! Right? But maybe he didn’t a couple days before it too…?

Maybe he’s getting sick.  His nose was a little runny yesterday and today.  I need to run the humidifier. Maybe it’s too cold in here at night.  This would be one nice thing about not living in an old drafty house. I should turn on the space heater. Or add another layer to what he’s wearing at night. I could get that awesome cute sleep sack I’ve had on my Amazon wishlist forever.

I wonder if he’s getting enough to eat at night before bed. Yes! He’s hungry! That’s it! That’s easy. A little oatmeal and breast milk before bed. That will be perfect.

Although I did have a latte early at work yesterday.  Maybe it’s the caffeine? How long does it take caffeine to appear in breast milk again? Ugh! This is why I don’t drink it — why I’ve given it up for so long.  I shouldn’t have drank it at all.  What was I thinking?

What wasn’t I thinking is probably a more accurate question.

You gave me a sleeper!

You think, I must be doing something right this time around. I mean you know that all kids are different, but there must be a reason that one doesn’t sleep and the other does. A reason that you had influence on, a role in, control over.

And then, one night in the middle of the night, that sound reasoning rolls over and wails. Crying, screaming, begging to differ. And you just know you’re doing something wrong.

But you don’t know. You think.

And oh mama, I am so tired of thinking. Somedays the mere thought of thinking (yep, another funny for ya!) is exhausting in and of itself.  The continuous weighing of every possible scenario, cause, side effect, outcome and trigger. Only to again be left dumbfounded and sitting in a bed stripped of sheets at 2:57 AM listening to the whir of the sound machine while you rock your “sleeper” back to sleep.

Finally one day Nick said to me, “You’ve got to stop trying to figure this one out. Somethings just are. For now.”

How simple. How resolute. His words echoed in my mind.

Dads are pretty awesome like that sometimes, aren’t they?

As for my “sleeper”? Well he’s 10 1/2 months now and, for now, still not sleeping through the night.  We had a good run he and I — almost 7 months of good sleep.  Every now and then he’ll throw me a Hail Mary and I score a solid night’s sleep but, for now, most nights I wake to a sharp and sudden squall.  For now, I tear myself from my sheets and shuffle down the hall to his room where I soothe him with a buttery voice and he takes visible relief in my arms.

As he nurses himself back to sleep I remind myself that this season is short, and that someday — for some insane and impossible reason — I will miss this. Instead of cluttering my head with useless analytics, I now choose to fill it with prayer.  In turn He fills me with hope.  A little happiness and gratefulness. And just enough energy (and I mean not a drop more!) to help me dredge through this particular trench I’m in — for now.

The Real Thief of Joy

A Few Thoughts on Adventures: Before + After Kids