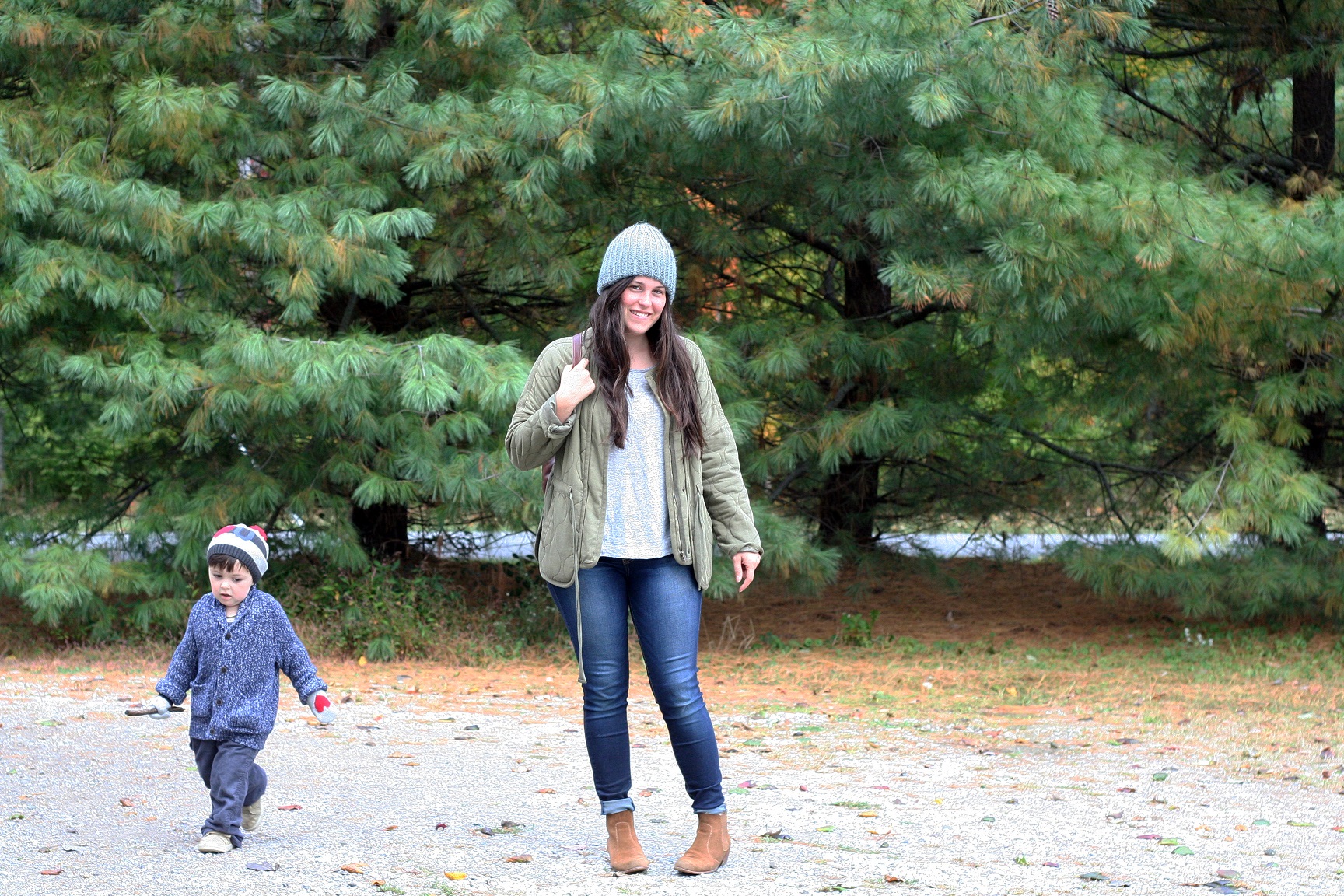 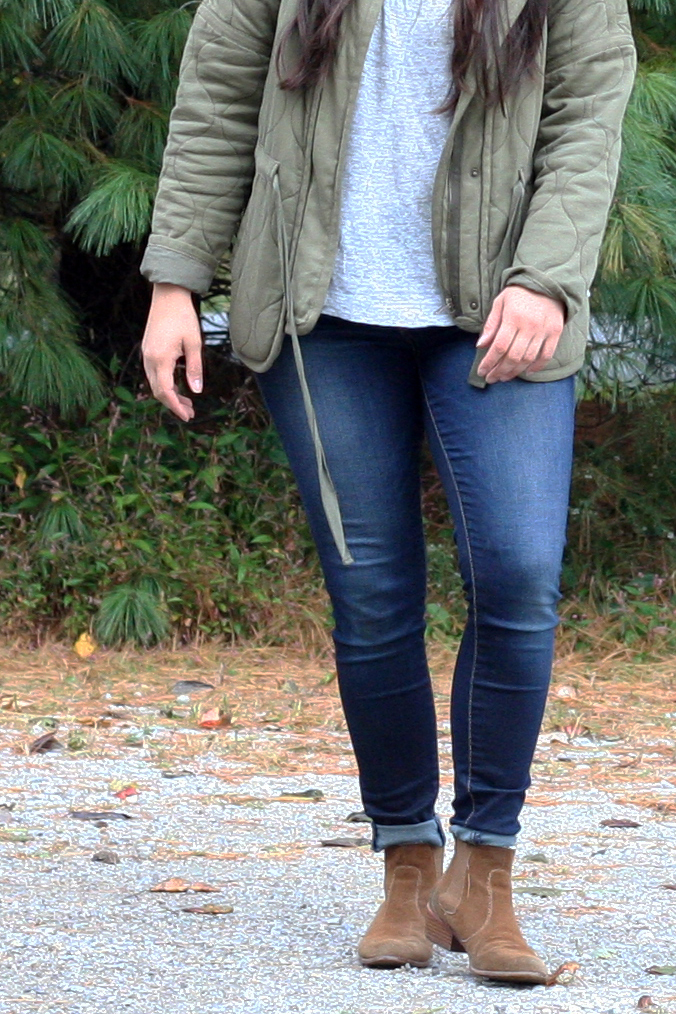 Last week I decided to start a series about dressing a postpartum body.  I’ve been battling a funk the past month and if there’s one thing I’ve learned from all this blogging stuff, it’s that there is always at least one other person out there going through what you are — so I thought I’d share in the process of how I’m trying to overcome this funk in the hopes that someone else might benefit too.

Part of me feels that my current dressing problems are a result of making the switch from a seasonal capsule wardrobe to a year round capsule during one of the biggest seasons of changes ever. [#oops] Haha!  One’s body will never change as much as it does in the first 6 weeks of postpartum, and of course this is the time frame in which I decided to pursue a more long term minimal closet… *Smacks self on forehead*  I lost 20 pounds in the first 3 days and went from wearing my maternity pants to my non-maternity pants over the course of two weeks.  [Have I ever mentioned how amazing the female body is?] These kinds of changes are nearly impossible to accommodate with many ‘long term’ pieces — no matter how versatile they are.

2. Consider creating a series of mini capsules.  Even planning three months at a time with a seasonal capsule can seem daunting when your body continues to change daily postpartum.  Hello nursing boobs…  I’m considering doing this for the next several months.  10-15 pieces for a month (4 weeks) at a time, pulling from your entire wardrobe.  I haven’t fully fleshed this one out yet, so I’m not sure [again] it will work well, but I’ve seen people doing this in addition to creating a full capsule wardrobe to cover them during season transitions too.

3. Work with versatile silhouettes. Shift dresses (not nursing friendly I know), swing dresses, shirt dresses, jeggings (bah! I hate that word), leggings, jersey pencil skirts, oversized tees, unstructured blazers + blouses, looser fitting button-downs: I have found all of these silhouettes to carry me through my 6 months of postpartum thus far.  They have the ability to fit well across significant changes in body size. Take for instance my chambray button-down.  It fit immediately postpartum when my boobs were exploding with milk and it still fits now that my supply has regulated itself and I’ve lost a pound or two.  Sure it was a little tighter then and a little looser now, but as far as the ‘fit’ rule goes? It worked.  And I can honestly say I wish I’d bought a shirtdress sooner than I did! It would have solved my I hate shorts woes for most of the summer. ;)

4. Don’t forget the alteration option.  When I set upon the grand notion of creating a long term year round wardrobe immediately following a pregnancy I did so with one thing in particular in mind:  anything that I might add to my closet that fit me now but wouldn’t necessarily later, I would simply have it altered.  I bring this up because this meant that I didn’t have to cast aside my desire to buy quality over quantity (which I admittedly still goofed on…).  In fact buying quality over quantity means that the alteration option is all that more realistic.  This will also hold true for higher quality pieces you have in your closet already — namely dresses.  Instead of buying a new dress for that wedding you have to go to, consider having one you already own let out for the time being. Usually they can do this up to two dress sizes.

*Note: I typically wear my non-maternity + non-postpartum (aka my regular ‘ol clothes) clothing looser. So if you normally wear yours trim + tailored it is not as likely to fit the same way I have described above.

1. Not to fixate on how much weight you have or have not lost. Even women who lose all of their baby weight within the first six months still can’t fit back into many of their pre-pregnancy clothes right away.  This is because weight really is just a number and doesn’t account for hips moving, organs shifting, blood volume and [potential] nursing.

I seem to remember having lost a little more weight by now with my first baby, so of course my human nature wants to say that I’m not doing as well. But things were very different then: I had gained more weight during my actual pregnancy, I was still working full time, I was mama to one not two.  I think I have still yet to release this sense of total control I think I have over my body this postpartum season — and that is ultimately what is holding me back from finding my new rhythm with food.  I find this ironic considering I’ve done this before and because being pregnant is the biggest test ever of releasing feelings of total control — but all the same I think it’s likely these emotions are adding undue stress in my life.

Instead, aspire to be the woman that rejoices at a healthy, nourished body.  One that fully expects it to take a lot of time for her body to resume it’s pre-pregnant state — or more accurately settle into a healthy new post-baby state.  One that identifies that some of the weight gained during pregnancy was to help nourish the little body that she’s been blessed to be mother to. That some more of it will help tide her over when she’s burning the midnight oil or alas doesn’t get to eat three square meals a day.  One that is excited by the chance to reinvent who and what, her body + mind are and will be.

3. When you’re standing in front of the mirror: to build yourself up.  Talk nice to yourself.  That’s your baby’s mama you’re talking about!  Soon enough, they will learn how to talk about themselves that way too. Let’s set a positive example.  Besides, the world’s full of too many body-shamers anyway. The least we can do is be original ;)

4. To nourish yourself.  Eat good, wholesome, raw and real foods.  Ever wonder why they call it comfort food? It’s because food not only fuels your body, but it feeds your soul too.

Next week I’m shooting to cover my favorite postpartum pieces along with some nursing friendly pieces as well.  Any thoughts?

Dressing a Postpartum Body | Own It Mama

Couldn’t get the tree up fast enough this year.

Two years ago Katie and Carey sent me the followin

Start with amen, the broken way. Unglued. The po

Remember that year we tore down the barn? The year