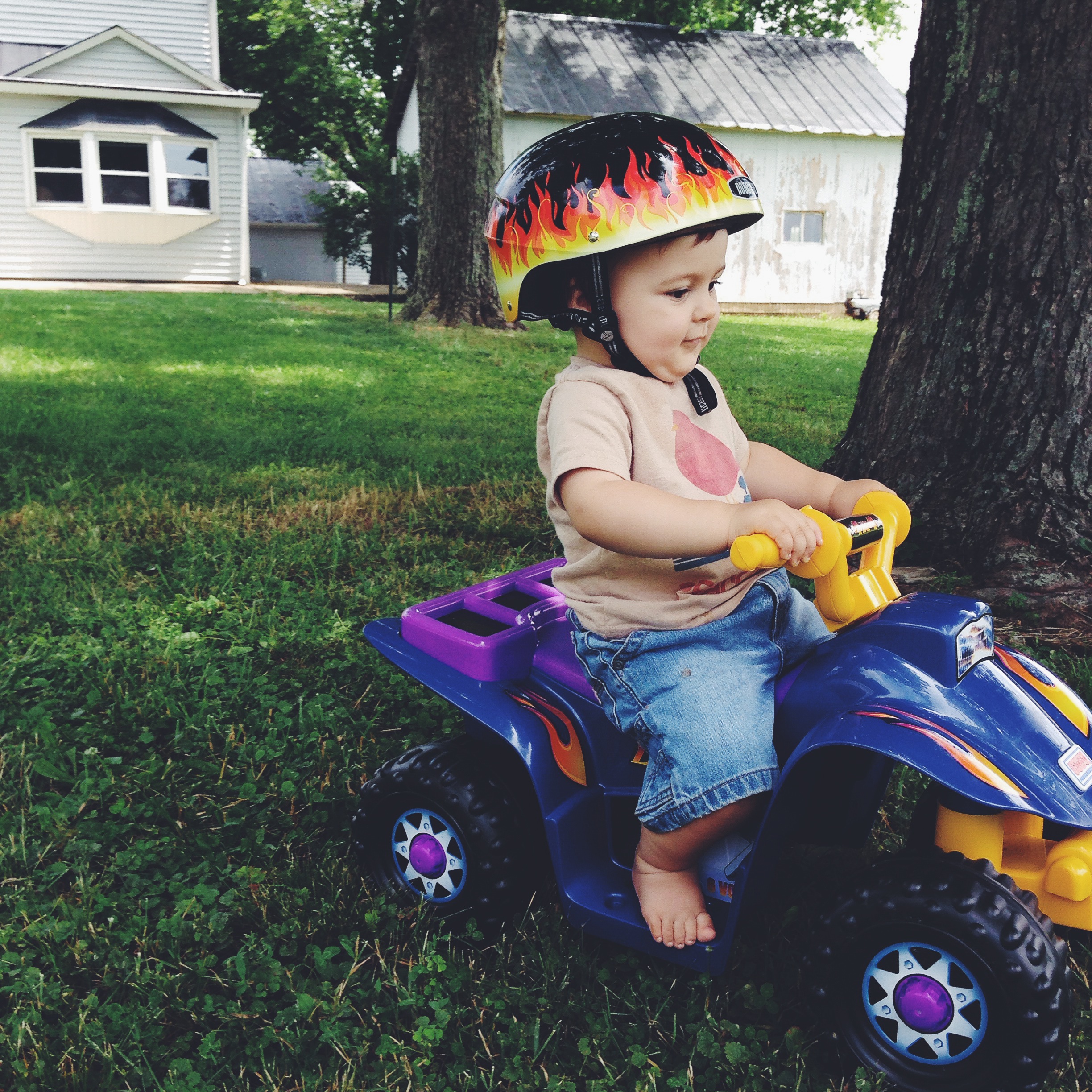 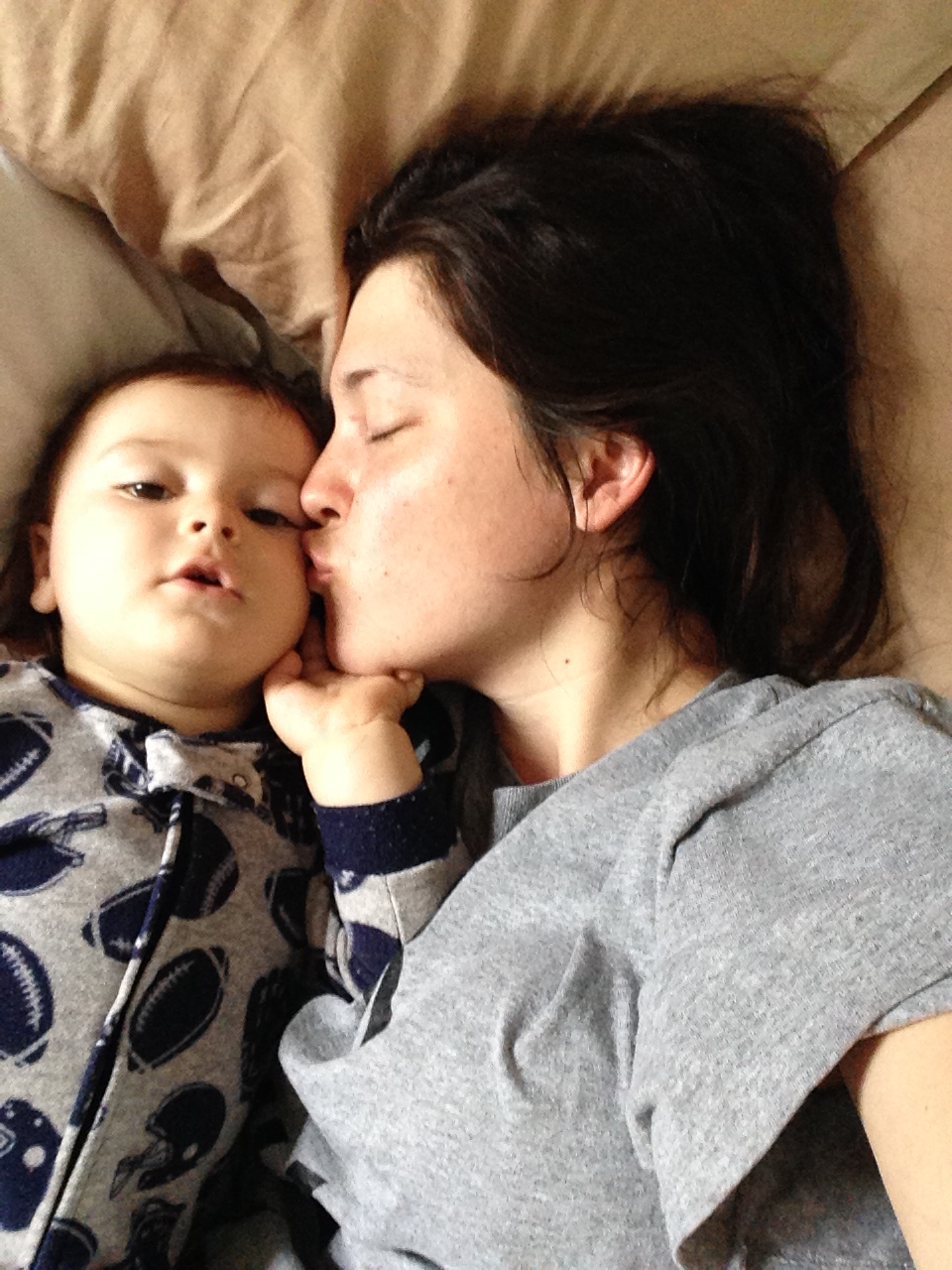 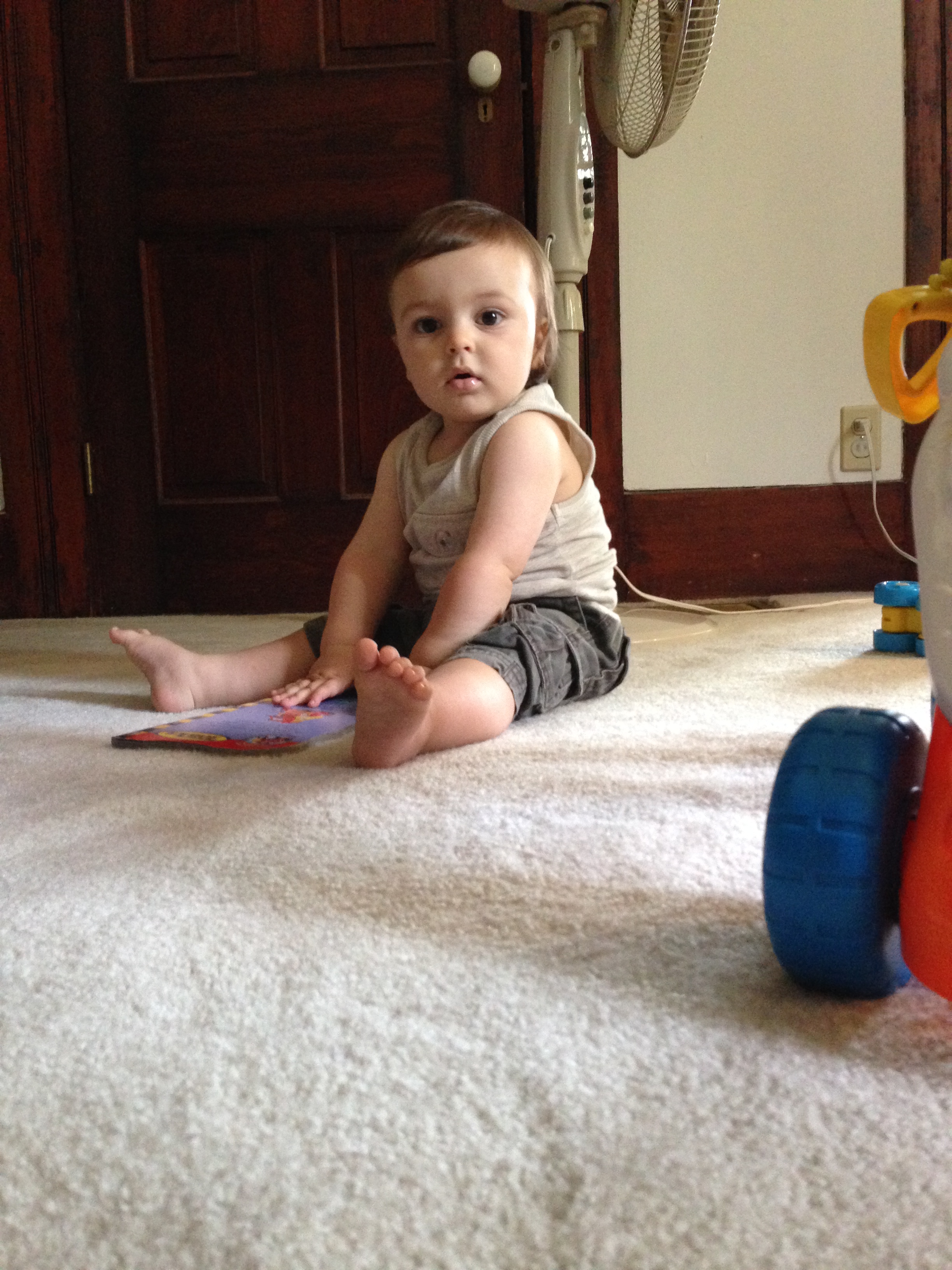 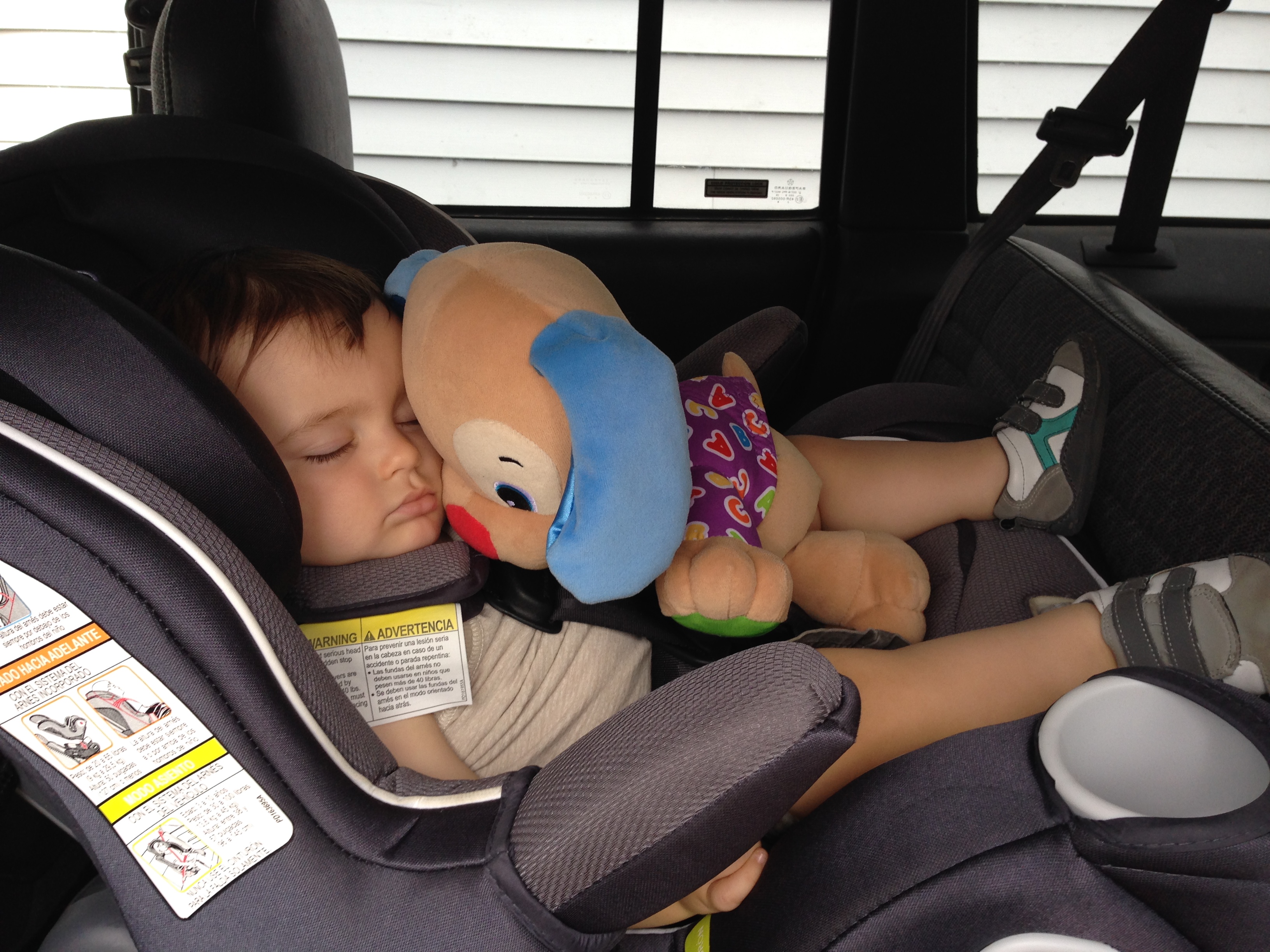 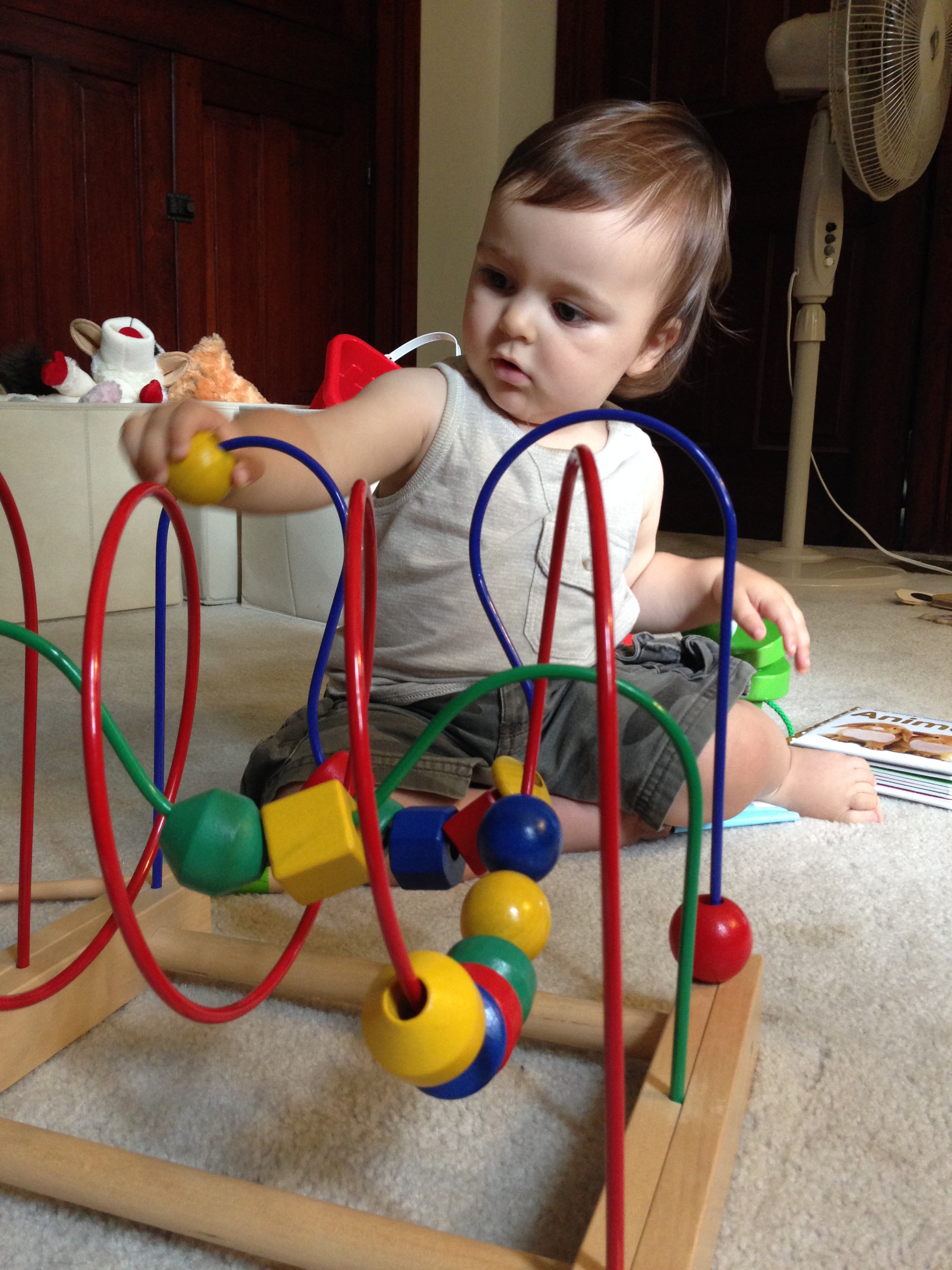 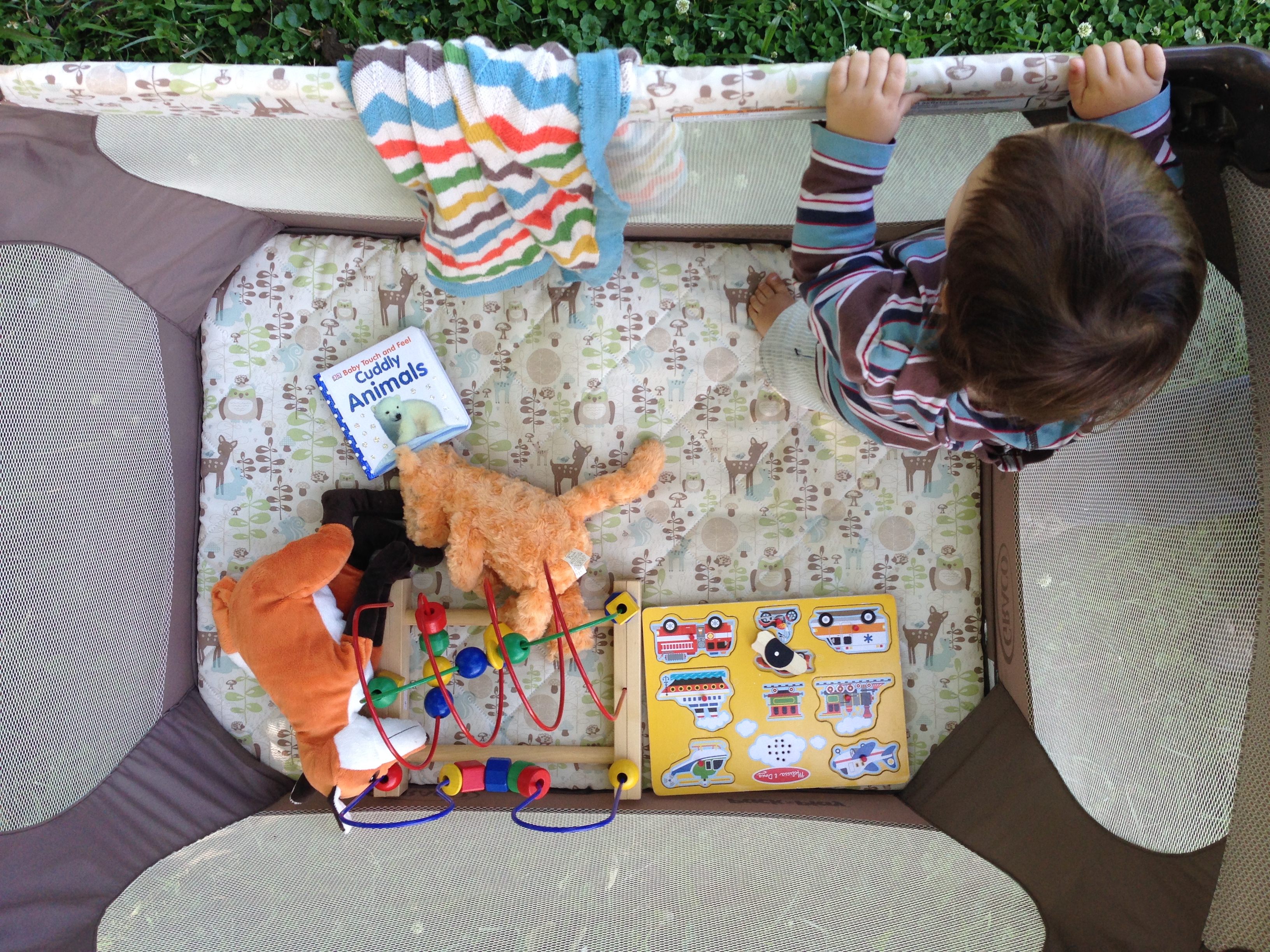 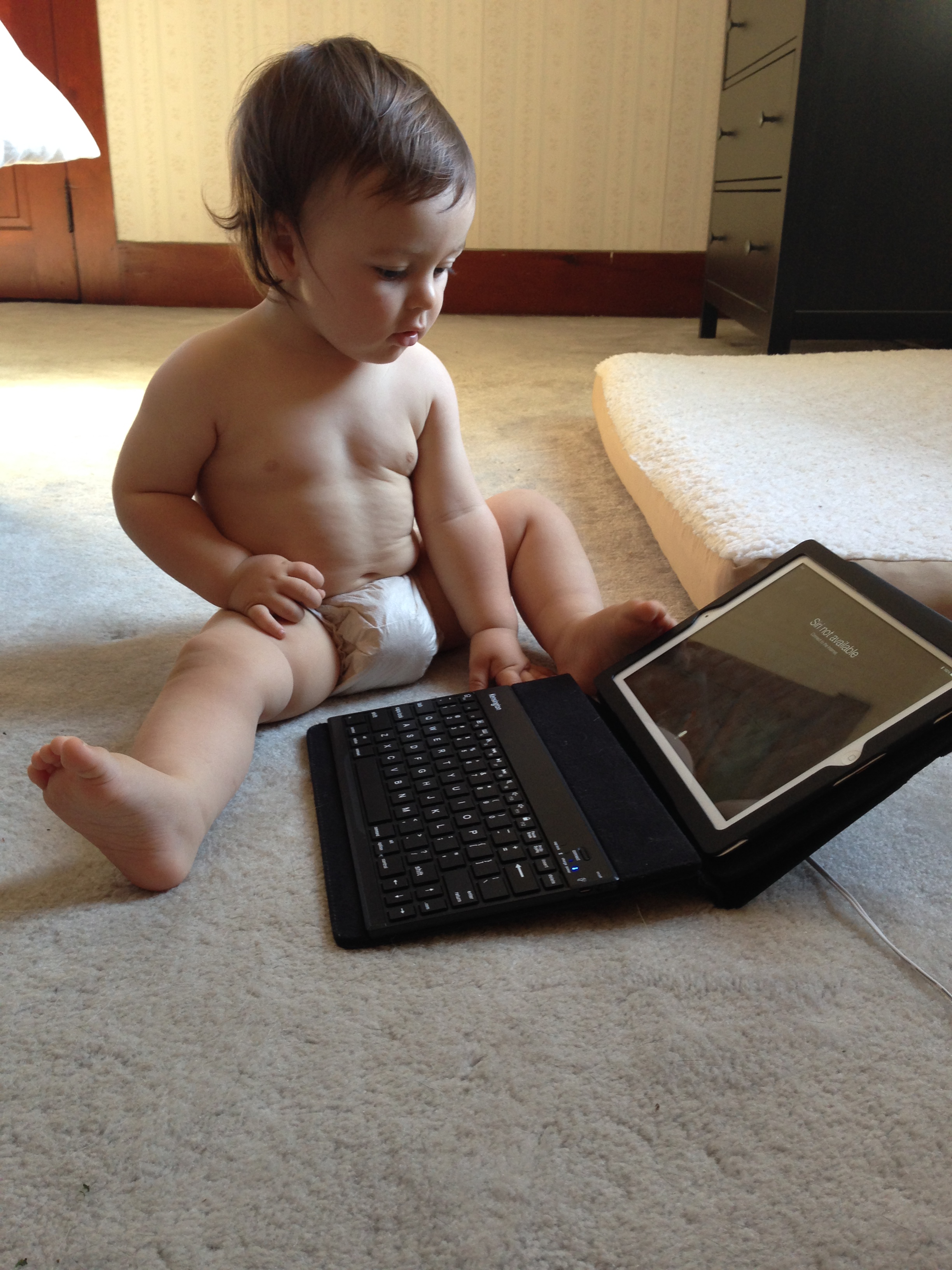 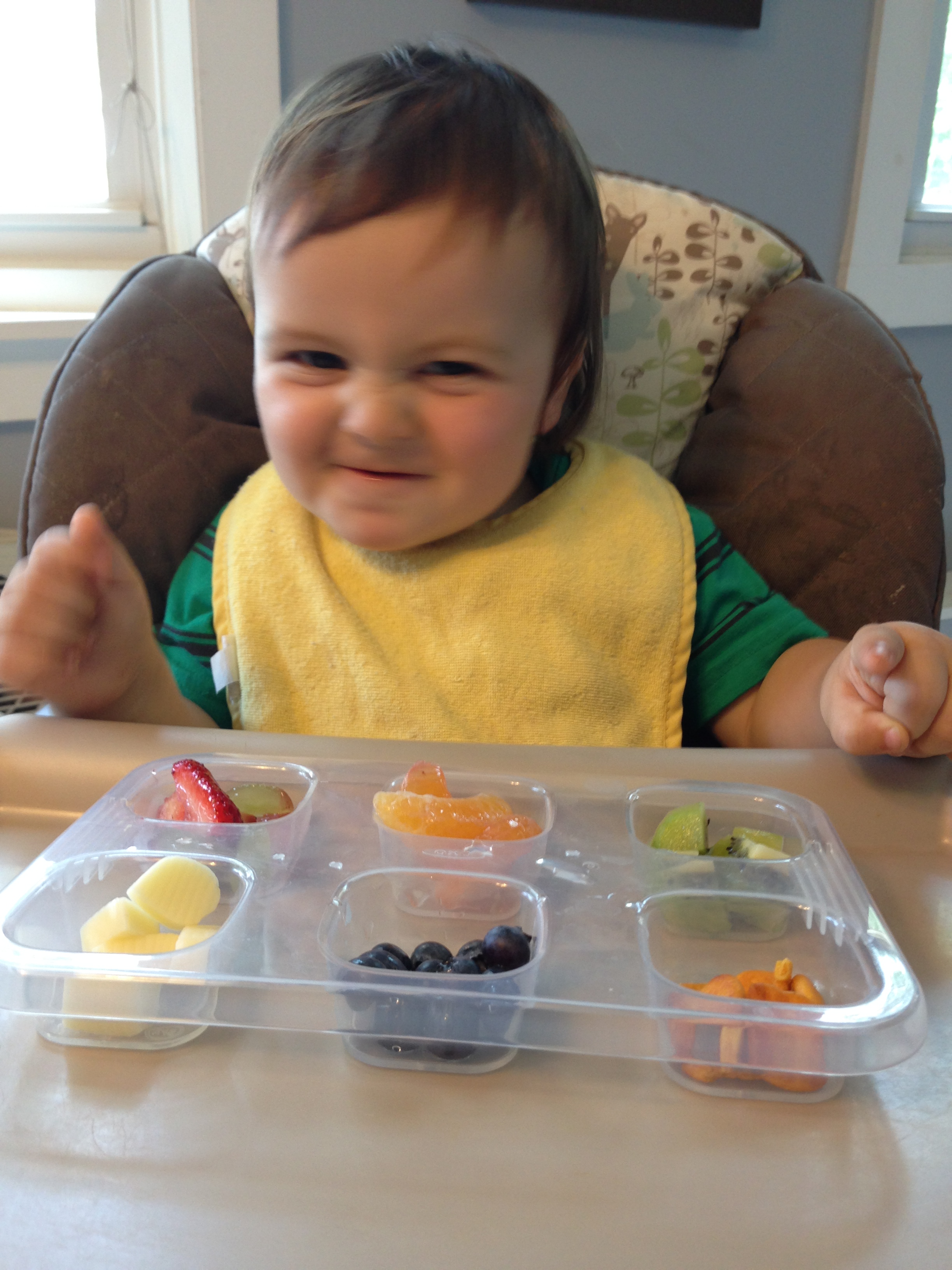 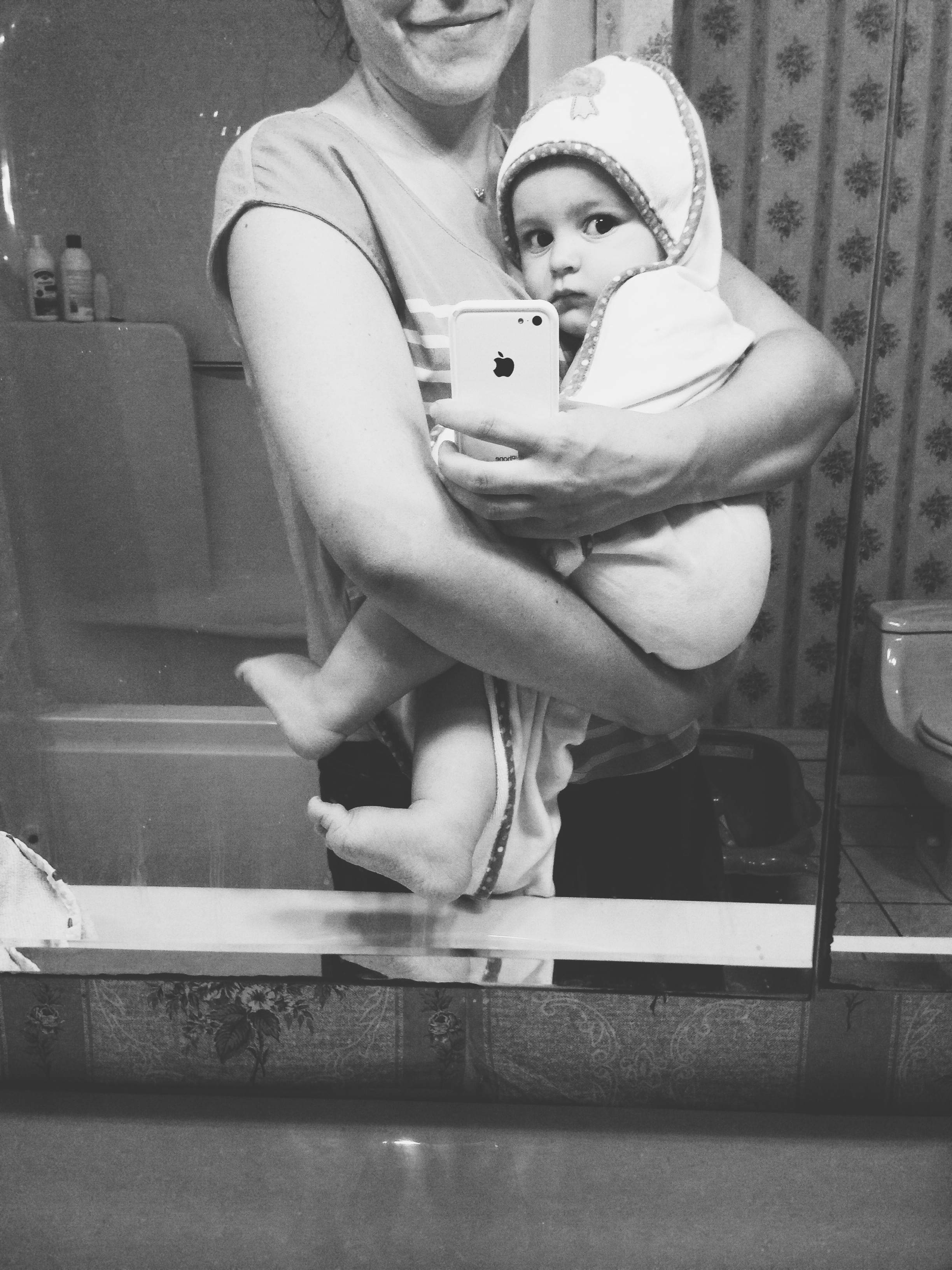 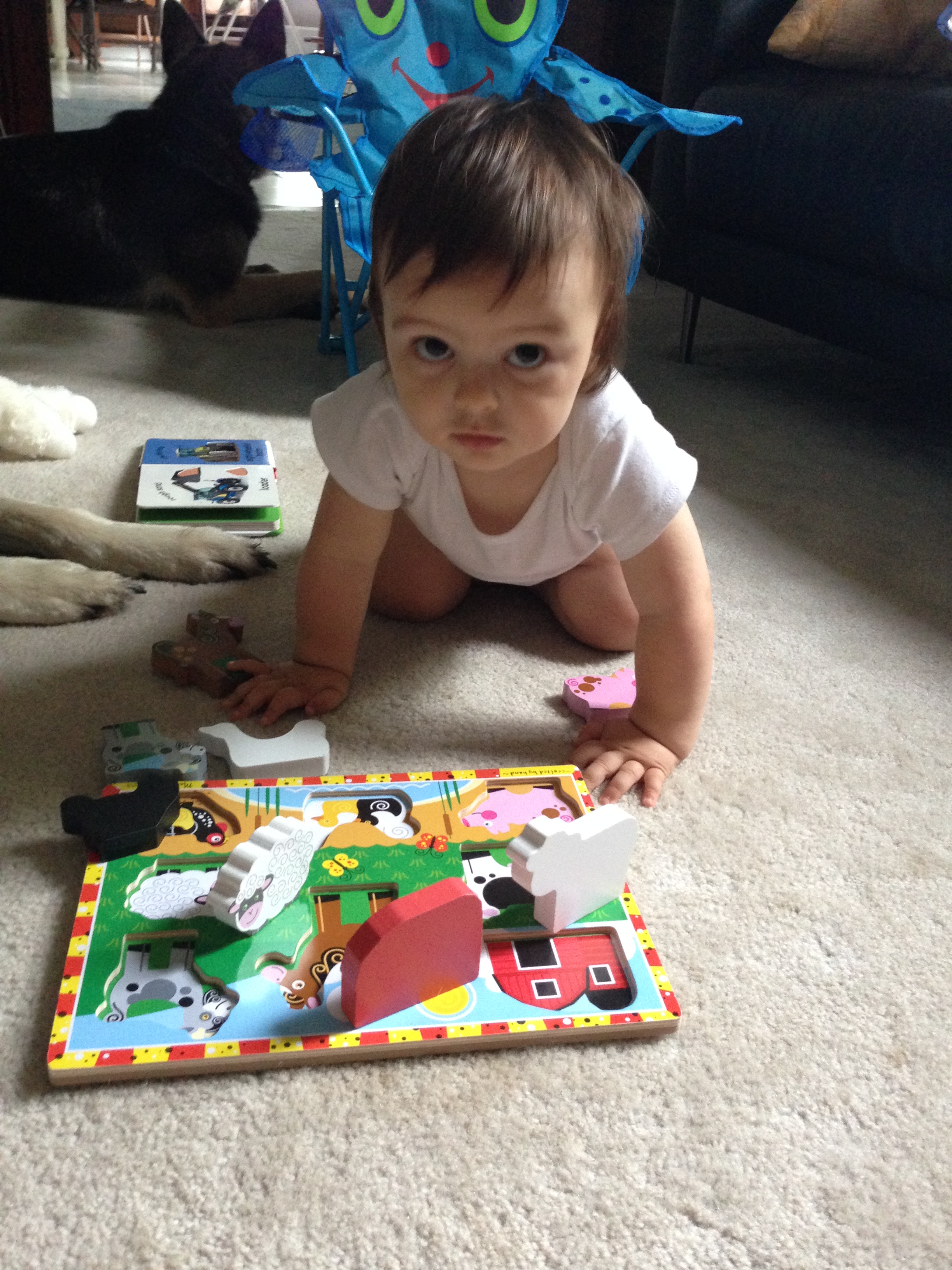 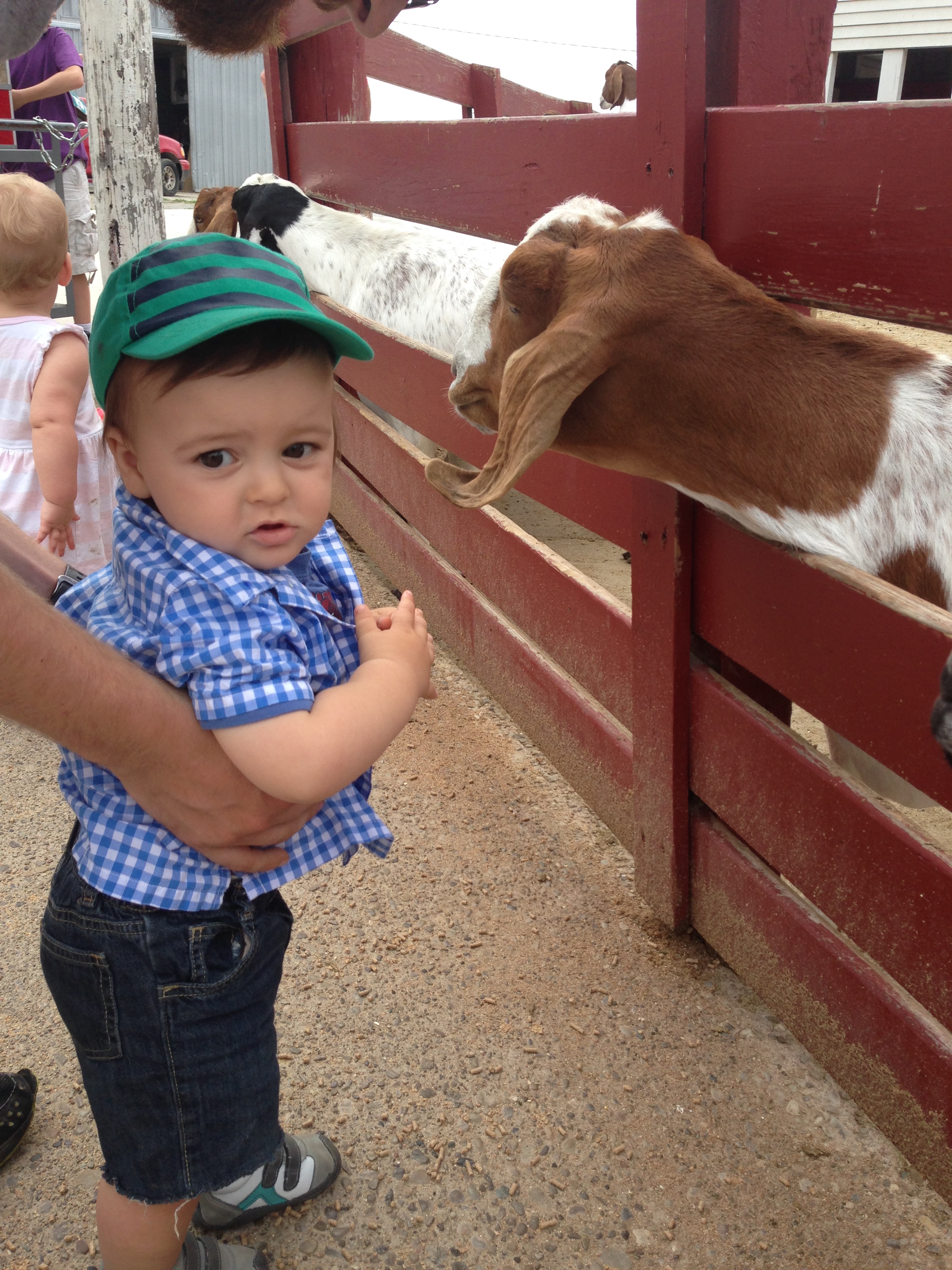 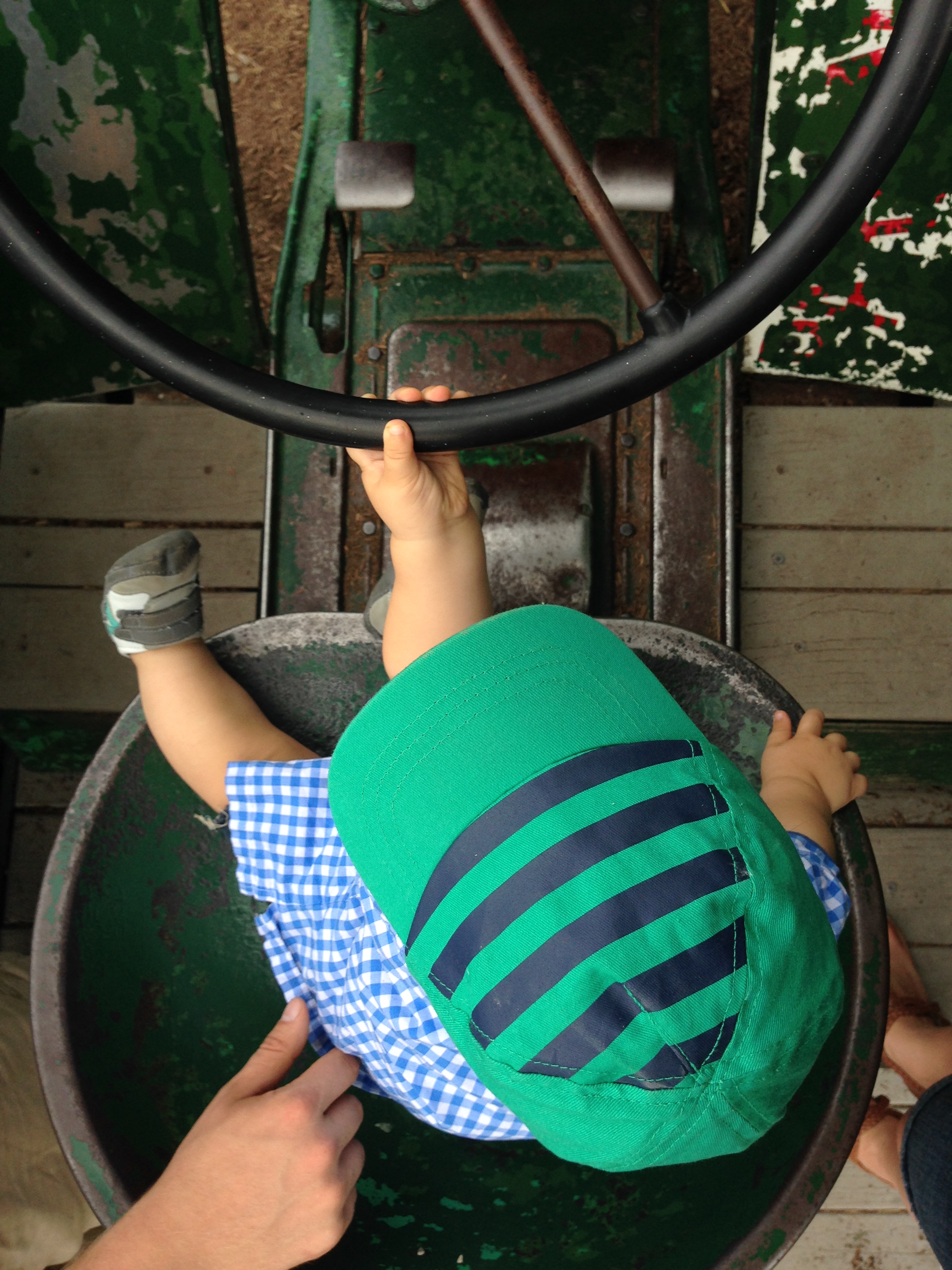 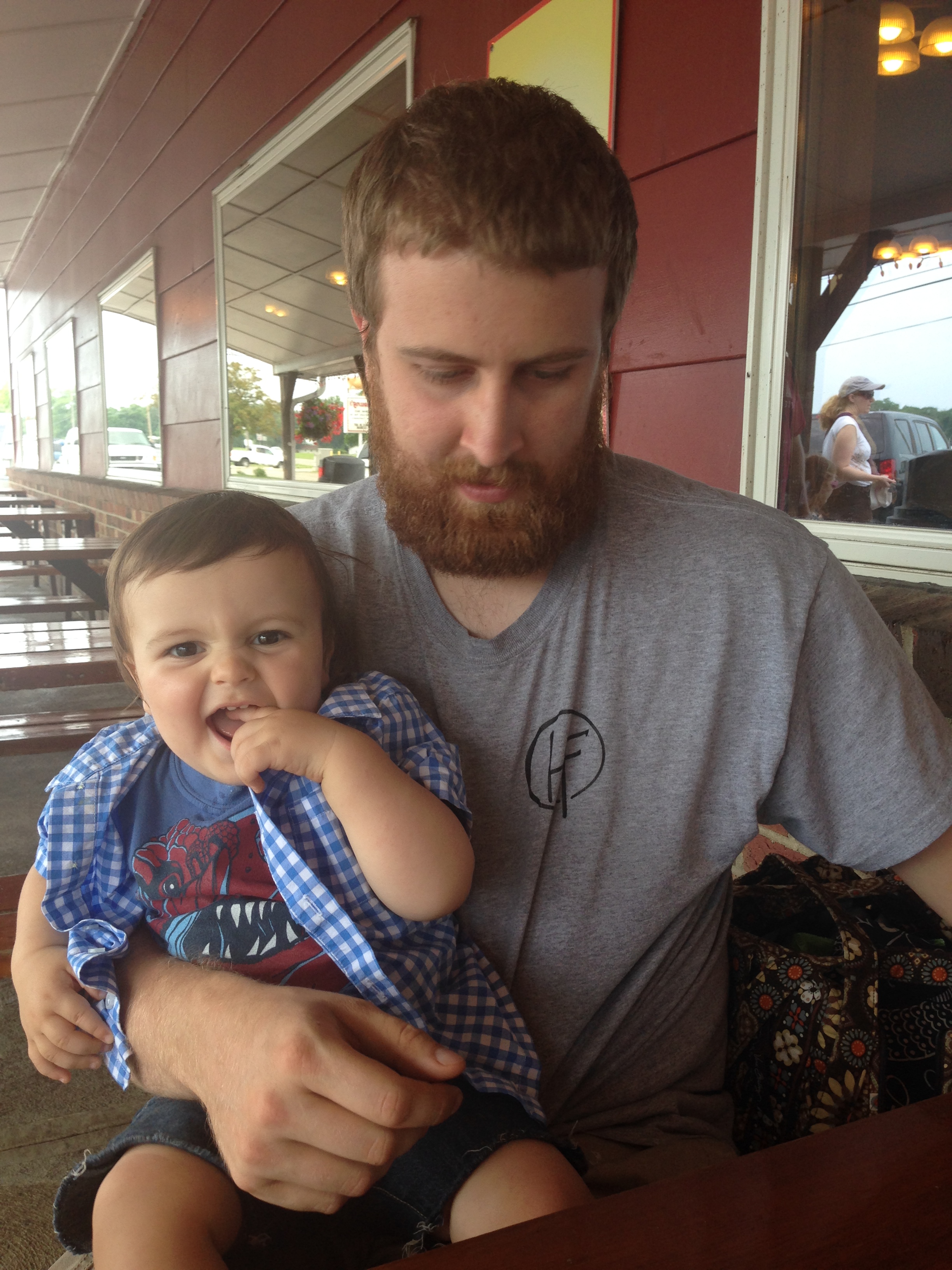 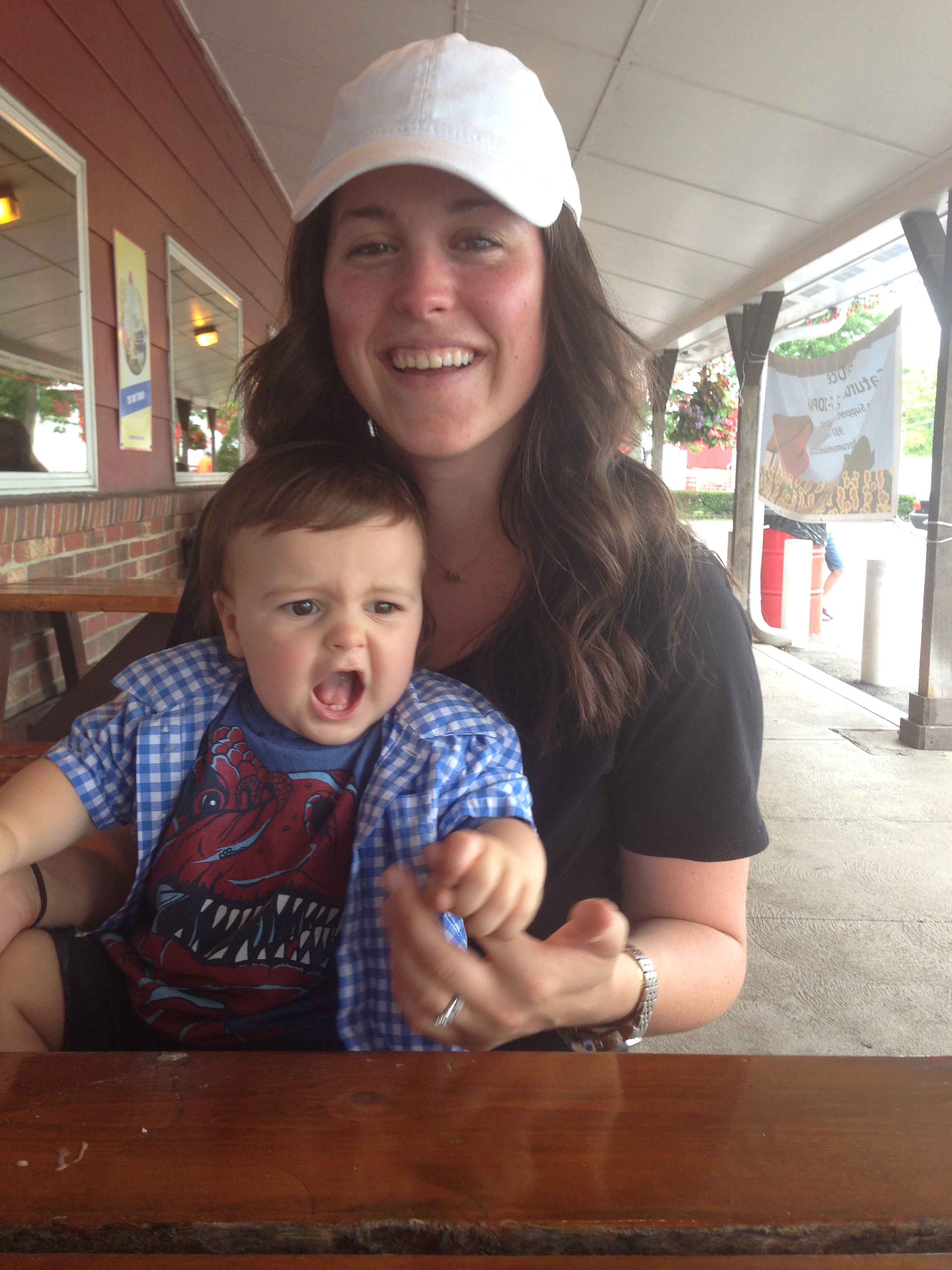 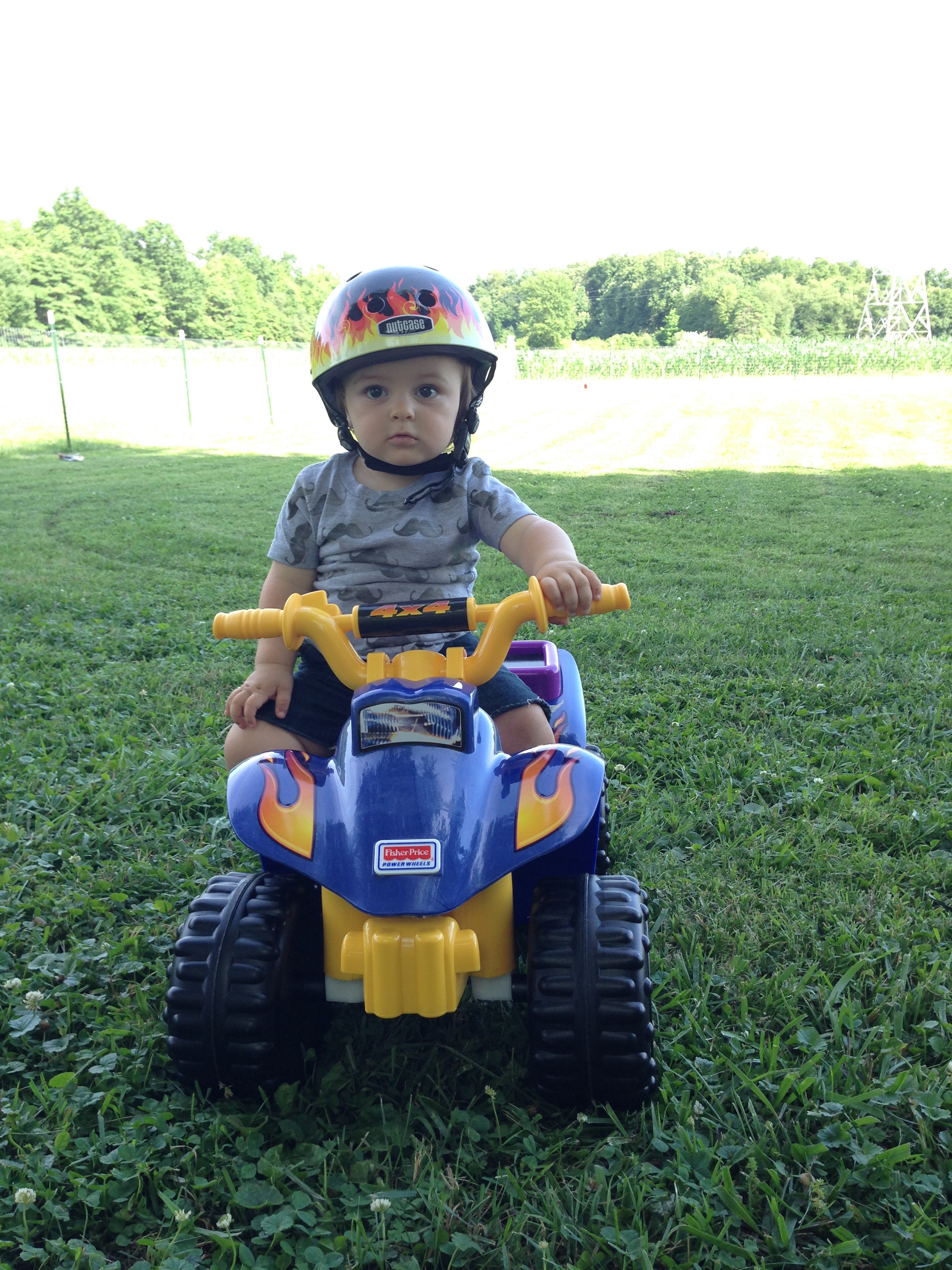 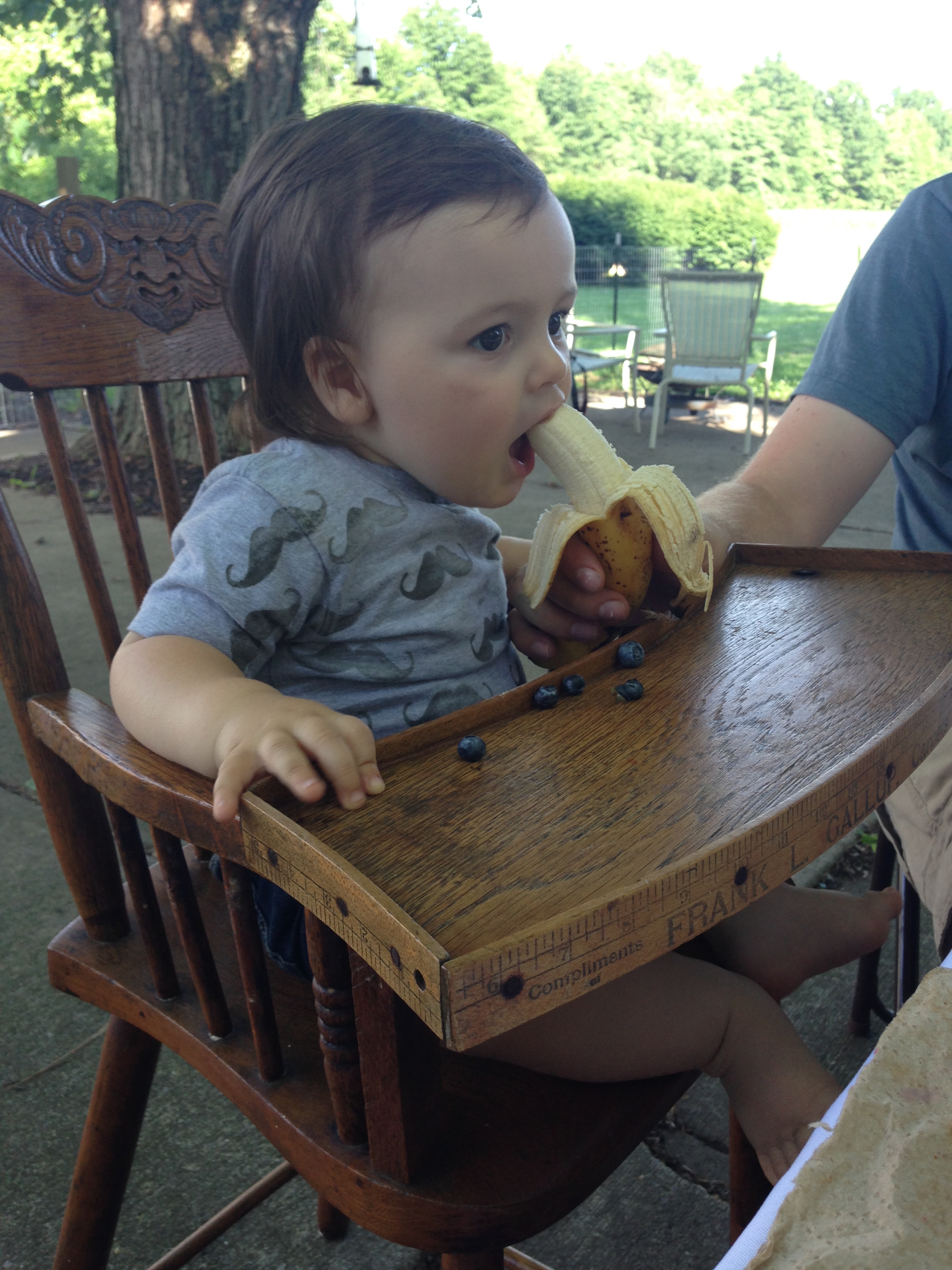 Just like every other new parent out there, every month since Wyatt was born I’ve been recording firsts, milestones, other fun moments and documenting them in some form (usually on Google Drive).  I also set out to capture a monthly photo (inspired by Pinterest of course) and overlay that photo with some “stats” and few tid-bits that highlight his previous month. I’ve been successful in completing this, and originally I’d only planned on doing this his first year; but now, we plan to continue to do this as long as he allows… or as long physically is possible. Haha! (I can see me now, attempting to hoist a sixteen year old Wyatt to my hip and casually pose in front of our old barn… Haha, yeah…)

I decided about a month ago that I wanted to “one up” his monthly updates. As he continues to grow and his personality emerges, a short bullet point list just doesn’t seem to cut it.  So I searched some of my favorite blogs and found some inspiration for what to capture and how to go about capturing more of the moments that I simply never want to forget. I honestly don’t have a goal in mind for how long I want to do this — so we’ll see where it goes!

I hope that you will enjoy the moments that we share.  I know I’m biased, but Wyatt is truly a very special boy.

During the winter we were down to one bath a week, despite our love of them.  He, unfortunately, inherited my super dry skin and simply could not handle more than one bath a week with out breaking out in severe red, bumpy and dry patches. Since the dryness of winter has lifted, we are up to two baths a week.  Usually Wednesdays and Saturdays.  Luckily he doesn’t really need more than at this point.  As you might expect, he loves to splash and play with things in the water.  We haven’t really played with any bath toys except for his orange whale cup that doubles as a cup to rinse him off with.  At this point he’d rather play with the faucet, drain plug and other wise leave mom breathlessly saying “don’t stand up yet Wyatt” or “you need to stay sitting down Wyatt”.

Naps: 1 or 2. Twelve months is a little early to drop to one nap, but some days when he wakes up a little later he won’t go down for a nap until the middle of the day. And then it’s about 2-3 hours long.  He will still often take two 1.5 hour naps during the day, usually late morning and then again late afternoon. With Summer setting his bedtime is more like between 8:30 and 9:30pm instead of the (has been usual) 8-8:30.  Sometimes is as late as 10-10:30pm! But that’s on an abnormal day for sure. And then he will almost always sleep in the next morning.

Night time: He is still co-sleeping. And honestly? Nick and I have talked about it and aside from the seemingly one night a month where we’re both like “we need to get him in his own bed soon” we are totally fine with it.  Even like it. Love it, actually.  Especially on the weekends…

Our decision for him to begin co-sleeping didn’t happen until Wyatt was about 6 months old.  We had just moved to a new house, I was still working full time, and little man would not sleep more than a couple hours at a time in his own room. (Before the move he was sleeping 8-9 hours at night, straight, on his own in his own room).  After the move he would wake up and cry and I would go in and comfort him, get him back to sleep and he’d wake up 20 minutes later.  On repeat, for the rest of the night.  After a few nights of this I finally gave up (out of sleep deprivation) and brought him into bed with us.  And, miraculously, he would sleep through the whole night.  Every night. You can probably assume the rest.

We’ve tried only a couple times to get him back in his own room, with absolutely no success. Most days I don’t think twice about it, but on the days I’m doubting whether or not I’m doing what’s best I remember the wise words my mom imparted early on after he was born. “Sleep is good.  For everybody.”

And let me tell you, it is. He sleeps 6-7 hours straight at least every night. Some nights longer.  He often wakes up for an early morning nursing and then goes back to sleep until 7 or 8 am.  Everyone says, all babies are different.  Apparently this baby doesn’t want to sleep by himself right now. And for now that’s perfectly alright with us.

He walks really fast when holding onto both of your hands, and will walk pretty well for several paces holding onto only one of your hands — but so far we have no walking on our own.  Furniture surfing and hopping like a daredevil, yes. Standing? Periodically.  Nana says he took two quick steps by himself before falling to a crawl the other day.  But that’s all there is to report. (I imagine he’ll start walking on the day he’s with Nana since he started crawling on the day he was with Mammie,my mom.  I only work out of of the house two days a week but, you know, of course I would have to miss something like that.

Everyone keeps joking with me about how not to wish so badly for him to walk, because the moment he does you’ll wish he couldn’t.  I honestly will be just as excited if he walks tomorrow as I would if he doesn’t walk until two months from now.  I’m in no hurry. Just trying to enjoy every step of the process.

At his one year check the nurse practitioner we see indicated that not only was he “very smart” but that he would be an “early talker” which was exciting because “most boys aren’t early talkers”.  We laughed. Will be? He’s already talking! It amazes me how he will try and repeat anything and everything you say.  If you say something more than three times, he’s studying you and trying to replicate the sound.  If nothing else he can usually perfectly replicate your tone of voice and voice inflection.

He especially loves to repeat any breathy words or noises like a long drawn out whispered “Wooooooooooowwwww”.

At this point the only signs he knows is the one for “all done”. Which I joke is sort of irrelevant since he can also say “all done”. Haha.

Meals: 3 meals, 2 snacks.  He goes through waves of a ravenous eating and seemingly not eating at all. One day he’ll put away more lunch than I feel like I could and the next I’ll have to trick him to take even a bite.

He eats more and more “table food” everyday.  It’s so fun to watch him want to try knew things and to feed himself.

Usually 4 times a day. And 2-3 times a day when I’m working. The rest of the time he drinks out of his straw sippy cup. He has no interest in straight up cow’s milk, but I have been successful in mixing in no more than 1/3 cow’s milk in with the breast milk he drinks.  He nurses early morning, at meals and before bed. But even on days I’m at home I will pump and he will always drink at least one meal with his sippy cup.

Since we’re only at 12 months I’m not thinking much about weaning yet.  I always knew that I wanted to breastfeed through the first year and figured I’d gauge how much longer after that when the time occurred.  Since there are just as many benefits of breastmilk into the second year of life as the first I have no qualms with continuing for now.  I imagine the weaning process for us to be very much so a baby-led/mommy-led event.  Much like with me introducing and replacing one nursing a day with a sippy cup and then mixing in cows milk with breastmilk, I anticipate inching him outside his comfort zone one day at a time — but listening to him and knowing what works and what doesn’t.  I have never had any plans to nurse beyond 18 months, so I suppose we’ll see how things progress.  If they continue as they have, over the next few months he will continue to stretch out his nursing intervals and hopefully acquire a taste for cows milk.  (If not it has also been suggested  to try coconut or goats milk. So I guess there’s that too.)  I feel that I’ve been lucky and I’ve enjoyed nursing.  I am comfortable continuing “weaning” at a pace that makes sense for both me and my boy, however uncomfortable the rest of the world is with that.

That said, I am fairly certain that at some point I will have to do full on mommy-led weaning.  This boys loves to nurse!

I’ve joked for the past several weeks now that Wyatt is exhibiting signs of my temper… Oops.  And like any normal child he has started (for awhile now) testing boundaries.  Nick and I have practiced our “I mean business” glares and have utilized them, so far, with great success.  Every now and then he’ll want to throw himself on the floor because he’s not gotten his way, but 9 times out of 10  we can usually be like “are you for real?” And he stops on his own.  Other successful attempts have included: “Okay, are you done now?” or “Give me a break man”.  Often times he almost seems to understand how silly he looks and ends up laughing at himself with us.

The most tried and true (and my favorite luckily) is the furrowed eyebrow glare.  He’s learned that means that his current behavior is no good.  He usually pauses with an innocent look and then we can share kisses and hugs and life is good.

He really is a great kid. And beyond him beginning to test boundaries we’ve also learned how much just setting down whatever we’re trying to multitask on goes toward having an unexpected intimate moment the our special little guy.

Among his favorites are:

He is quite the ham in comfortable or familiar settings. And loves flirting it up with the ladies.  He can be shy and reserved in the newest of settings but usually warms up quickly.  He doesn’t have a slew of kids to hang around with, but we do our best to seek out play dates and playmates and when we do, he absolutely LOVES having a buddy to talk at and play with.

Everyday you reveal to me yet another awesome thing about yourself, but also about being a mom.  You are so smart and already are so passionate about things. I know this because you often get so excited you literally shake/shiver with your whole body.  You already understand that laughter is the best medicine and never cease to make your dad and I chuckle at least a dozen times a day. We love you fiercely and know that our lives have been positively blessed by knowing you and loving you.

Always, always be your seriously awesome self.