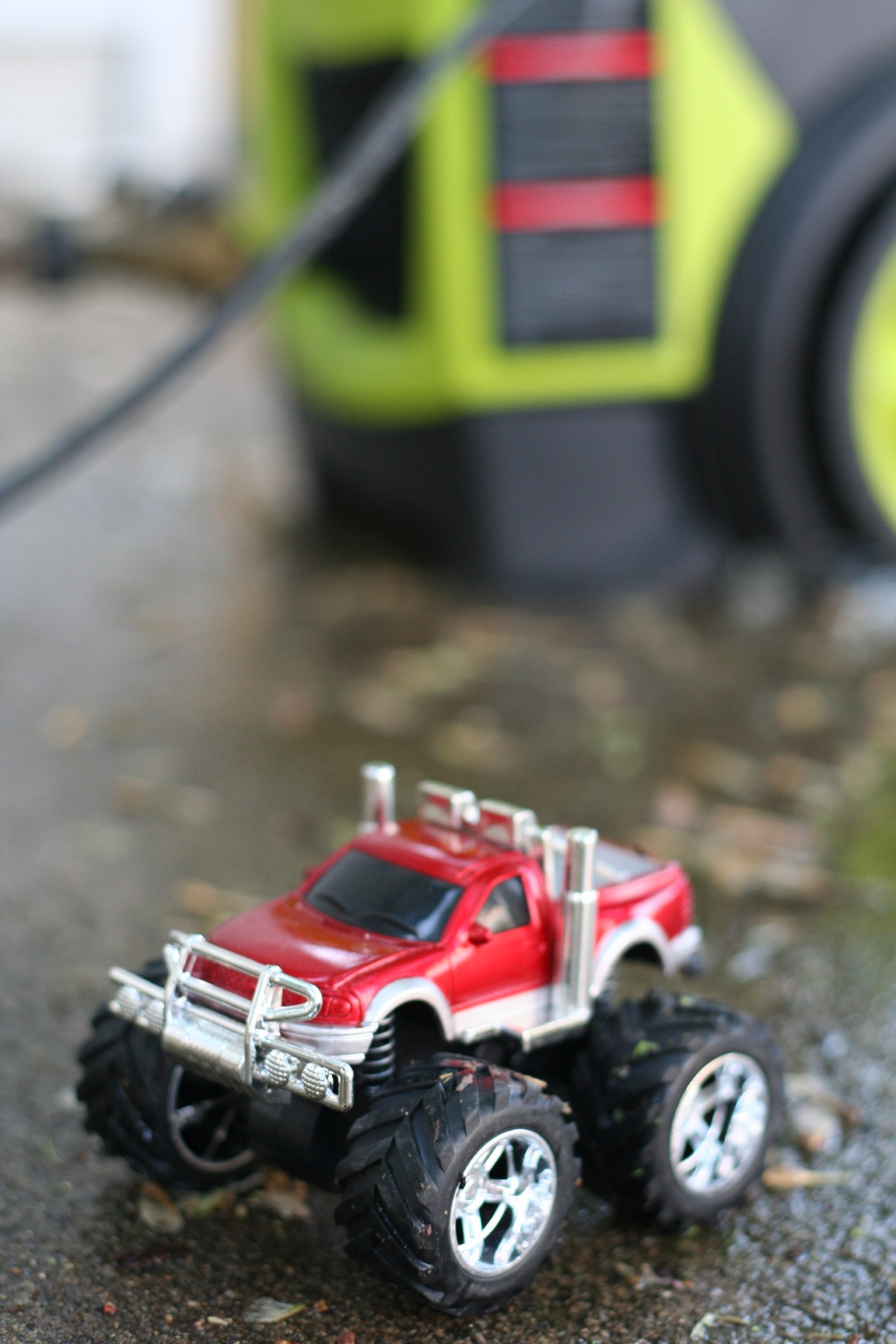 He drags his monster truck along the concrete pad sideways.  The rubber wheels grip the rough surface and cause it to skip and jump and vibrate under his grasp as he moves it along in an arc before him.

He’s squatting next to me, an arms length away at most.  I sit on the hard ground, cross legged, with a baby slumbering and strapped to my chest. He lives there most days, but less and less because more and more he wants to get in the mix and move.

He pops the truck up onto it’s back wheels and balances it so that he can remove his hand. He looks up and says, “weedy!”

And then he finishes with a, “No way!”

I’ve learned I say the phrase “no way” a lot lately.  Having a toddler around I would imagine is much like having a parrot in some respects.  Although toddlers are much more fun, cute, snuggle-i-er and well… better.

He  suddenly flips it upside down, “Uh oh mommy! It dashed!”

He continues playing. Now ramming the truck into another so that it makes a large crunch sound. Each time looking up at me waiting for me to smile.  I cast a sideways glance at some chalk drawings we finished up just a little earlier.  My gaze scans across the expansive pavement we have at the rear of our house.  I notice large cracks in the concrete, weeds filling them.

Sigh. I’m so behind on weeding. So behind on everything really.  I don’t know if we’ll ever be able to take care of this place the way we should.  What were we thinking?

My mind quickly pulls before me ‘the list’.  The ever increasing list of All the Things we identified we both needed and wanted to do when we bought this place. And with laser point accuracy, immediately fixates on all of the items that aren’t crossed off — instead of the ones that are.

And there I am again. Standing at the precipice of that treacherous, all too slippery slope that says you’re not good enough. Nothing you do is good enough. The enemy lives here, and apparently now I do too. Such an ordinary moment to derail a person.

Phrases not once uttered during the six months we spent finding our home, almost two years ago now. Well, unless of course they had the word not in front of them.

And we did it. We found our dream home — even if it is just a shell of what it will be one day.

You see, Nick and I have an eye for the potential a place has.  And we fall hopelessly, madly in love with it.  Well I’m not sure he would describe it that way, but I would. Of course the dreamy rooms I had dancing around in my head won’t come to fruition for a long, long time.

We are in it for the long haul.

Hmm. Now there’s a phrase that accurately depicts our situation.  We bought our house with the intention of never moving.  A house our family would grow to fill and that we would eventually grow old in. Not super common in this day and age, but Nick and I? I dunno, I guess we’re weird like that. We bought a house that had amazing bones and could easily house our growing family — but that also needed a serious amount of love.

The long haul. When I think about it, I feel like I often hear this phrase in the context of a relationship. You know?  “Those two? They’re in it for the long haul.”  And the more I think about it, it makes sense why no matter how I try and keep my negative thoughts about our behemoth-of-a-project-of-a-house at bay I keep winding right back up where I left off.  Much like you have to love someone in a relationship just as they are, I can’t just love the potential our house has. First, I have to love our house.  Exactly the way it is.

And with it’s rotting subfloors, wallpaper plastered walls and lack of central air lemme tell ya — it ain’t no picnic.

As I feel a nudge threatening to push me over the edge, down that horribly steep and slick hill — a memory floods my brain instead.

It was Halloween, and it was our final walk through of the house. Hours before we would sign way too many signatures that would officially say it was ours. But, it was already ours.  I know this because as I stood in the kitchen by myself, silent and overlooking the breakfast room I imagined Wyatt’s little feet totting across the tile — tile that had to go— to get to me.  And right then and there I already felt a little sentimental at the thought of tearing it out.

Wyatt wasn’t walking yet when I had that vision, but those tiles are where he took his first steps. I remember them clearly. Ah! Just so much joy and love in that moment.

Oh how I thank God for the chance to choose again. :)

Unexpected Joys in Our Own Backyard

Operation Blanton Farm | In the Garden