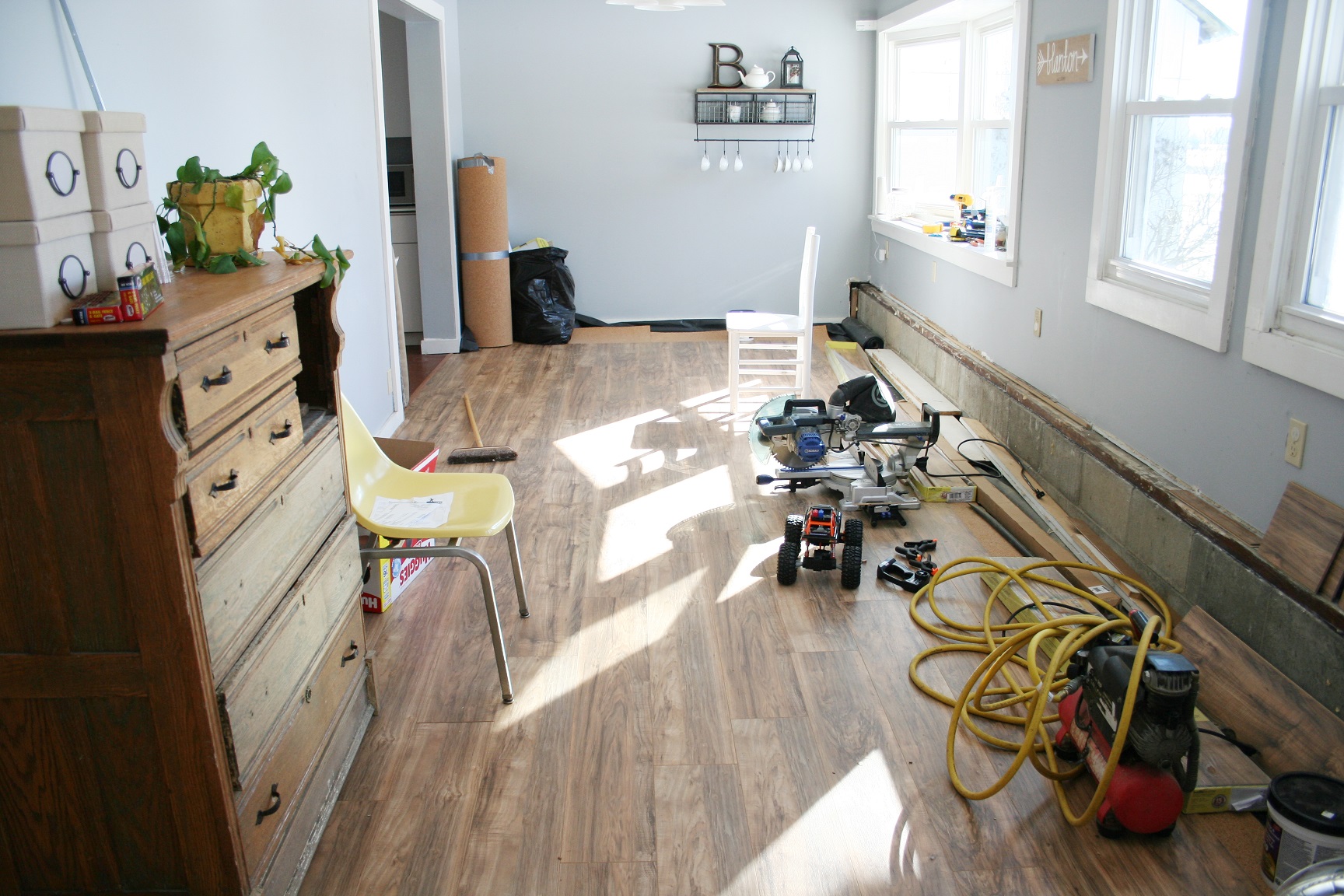 Gosh it’s been forever since I’ve done a post about any interior (or exterior for that matter) farmhouse progress. But we’re in the process of laying down new flooring in part of our kitchen so I wanted to share a some photos and thoughts with you.

So much of the design process — on TV, on the internet, in stores, in our personal conversation — focuses on the AFTER.  It’s the goal right? The finish line. The product. But I’ve always been bad about enjoying the process as much as the final result.  I don’t mind hard work, but I usually don’t have as much fun with the ‘getting there’ as I should.  And I’m trying to change that.

Here are some before photos of the space: 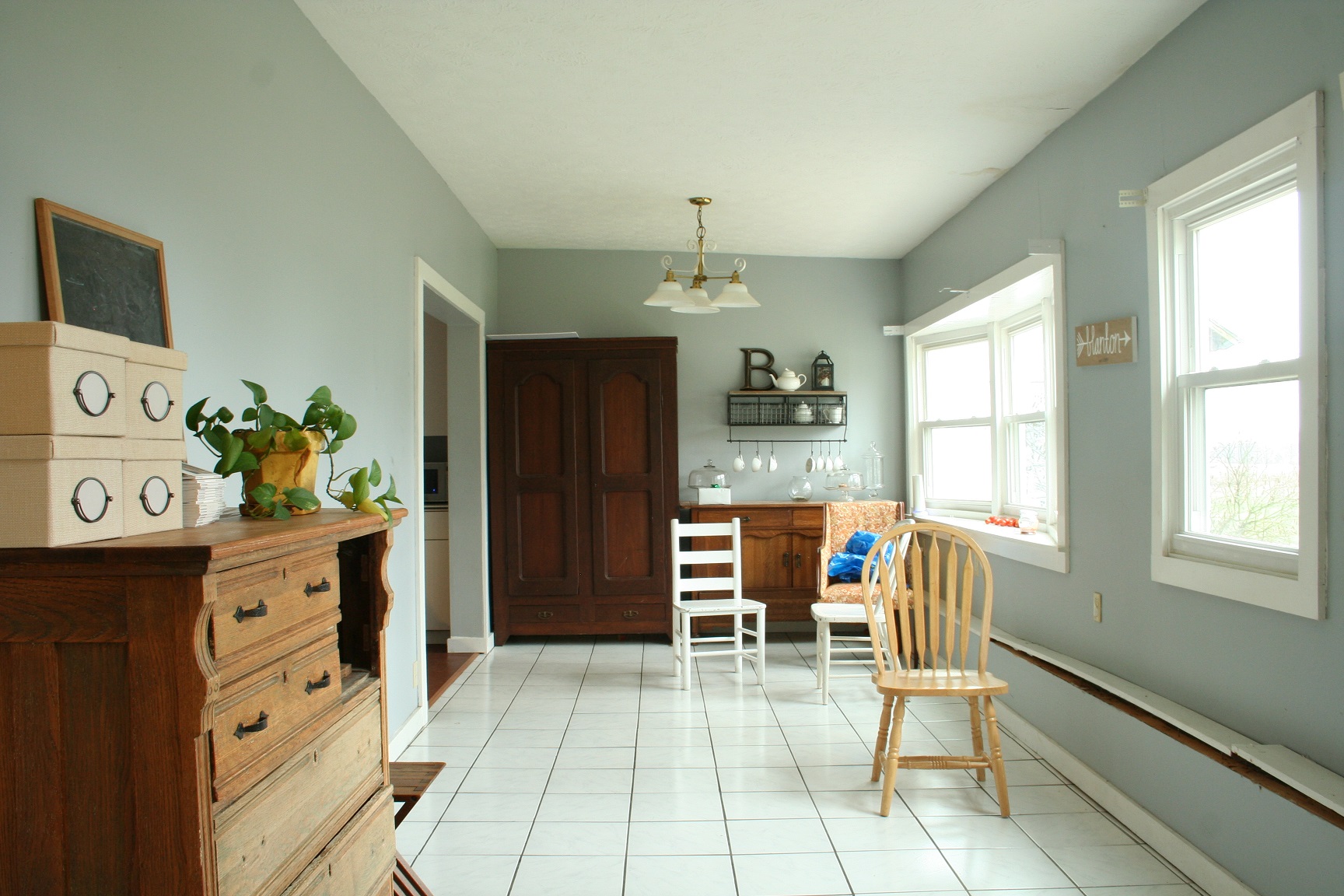 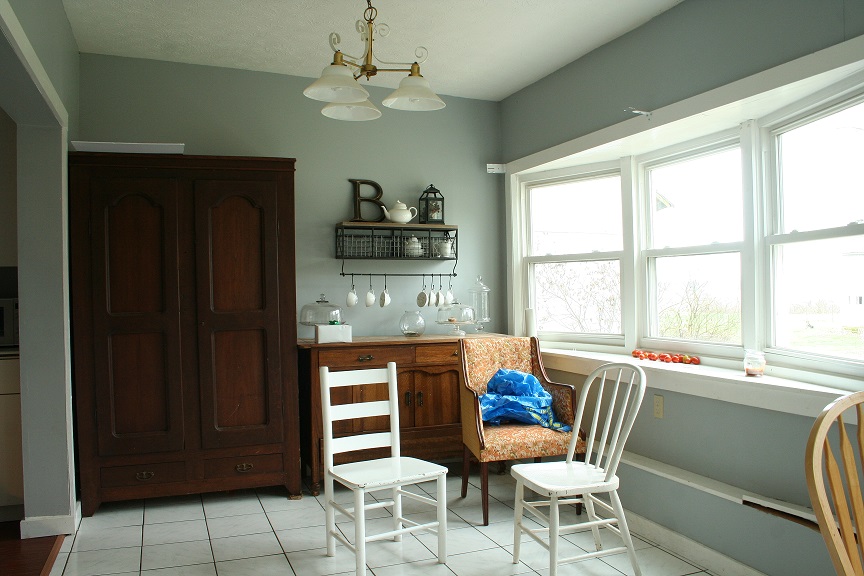 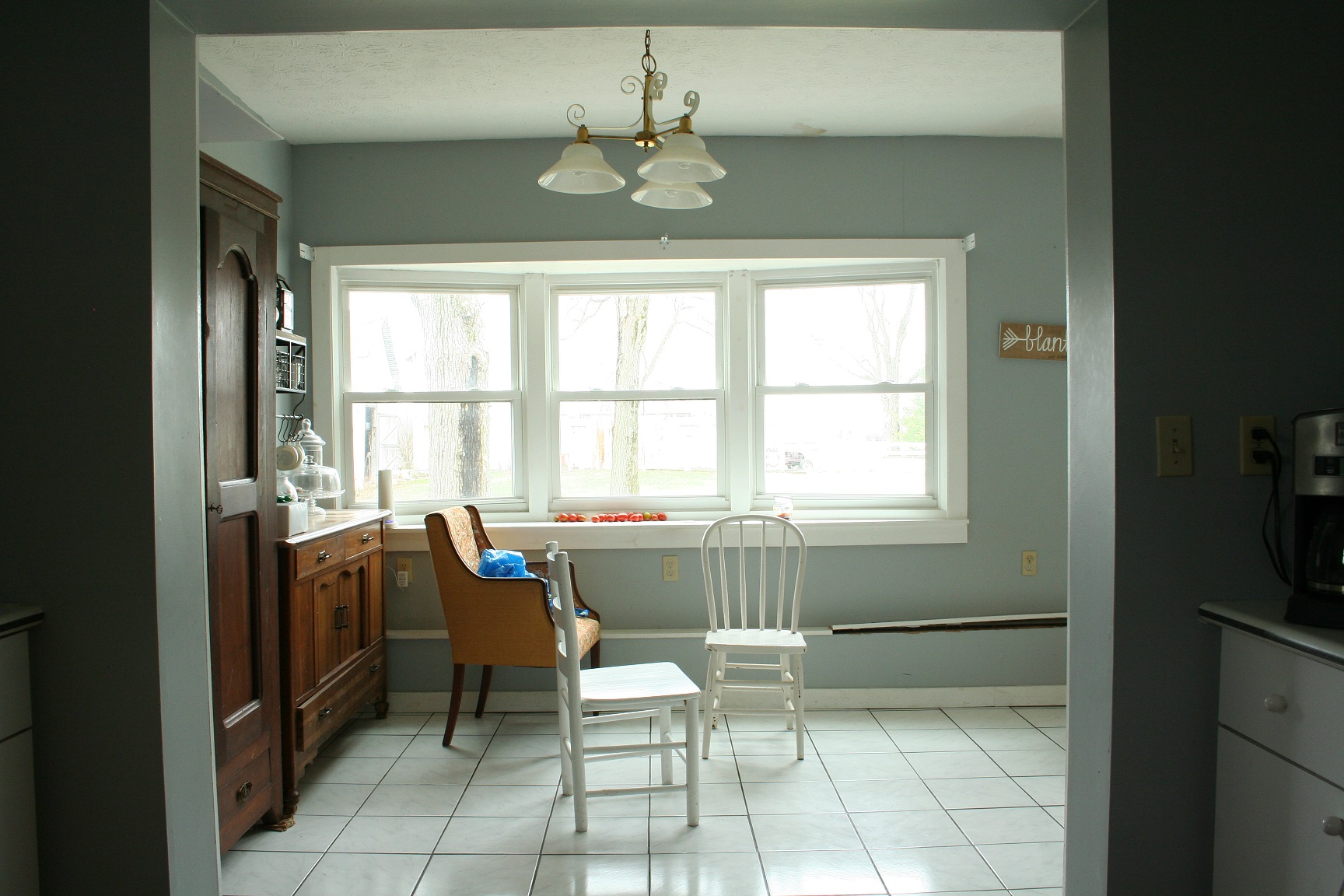 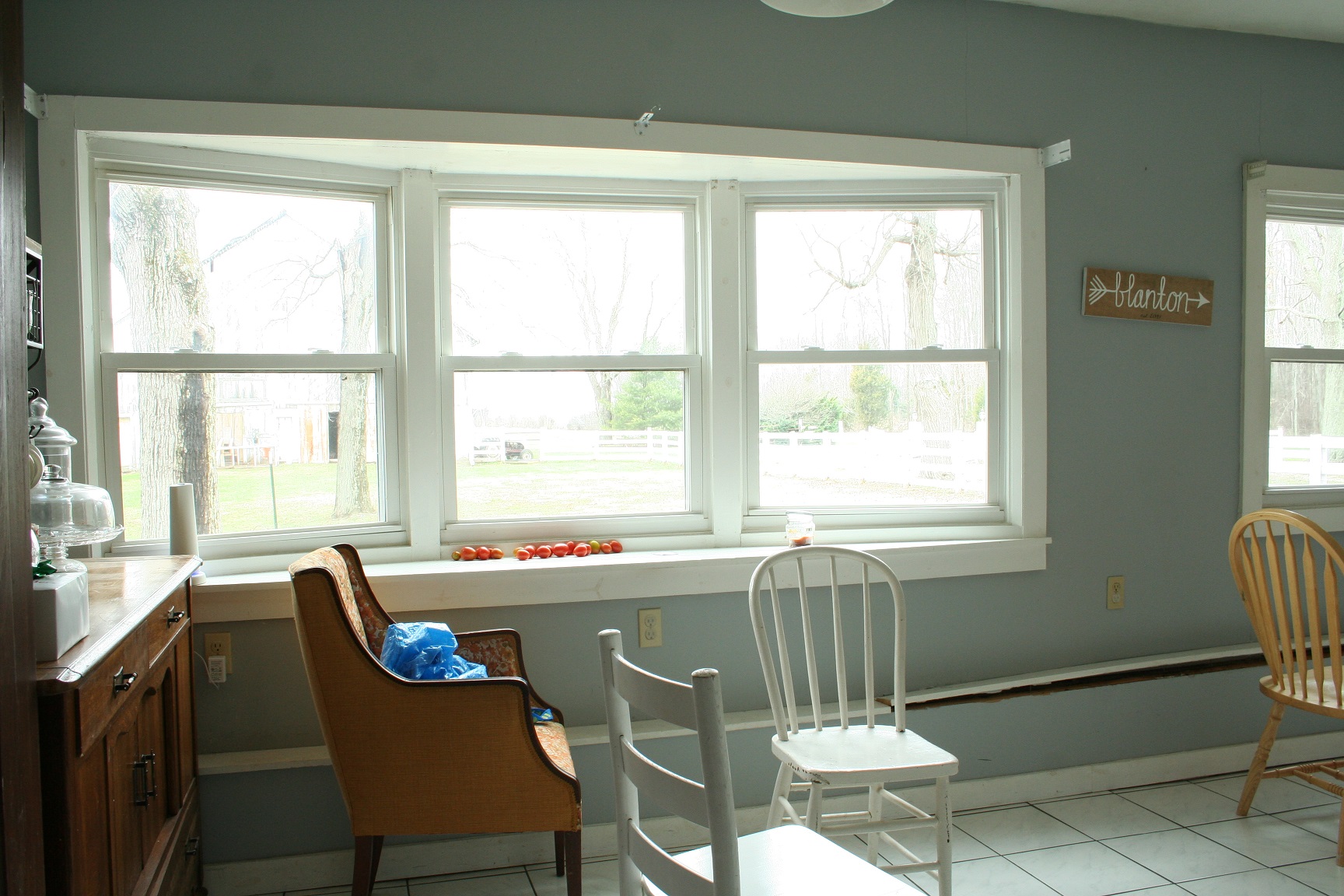 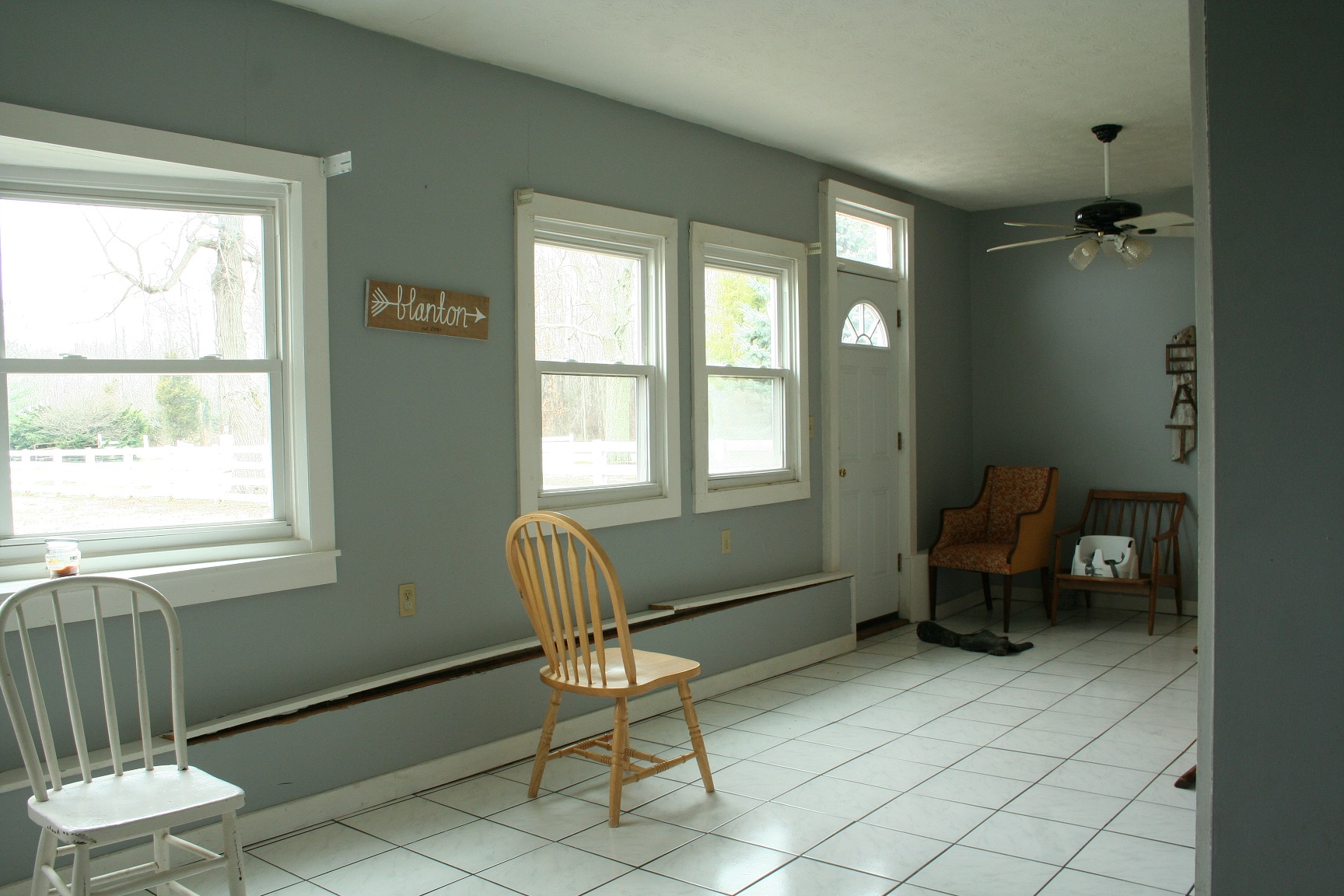 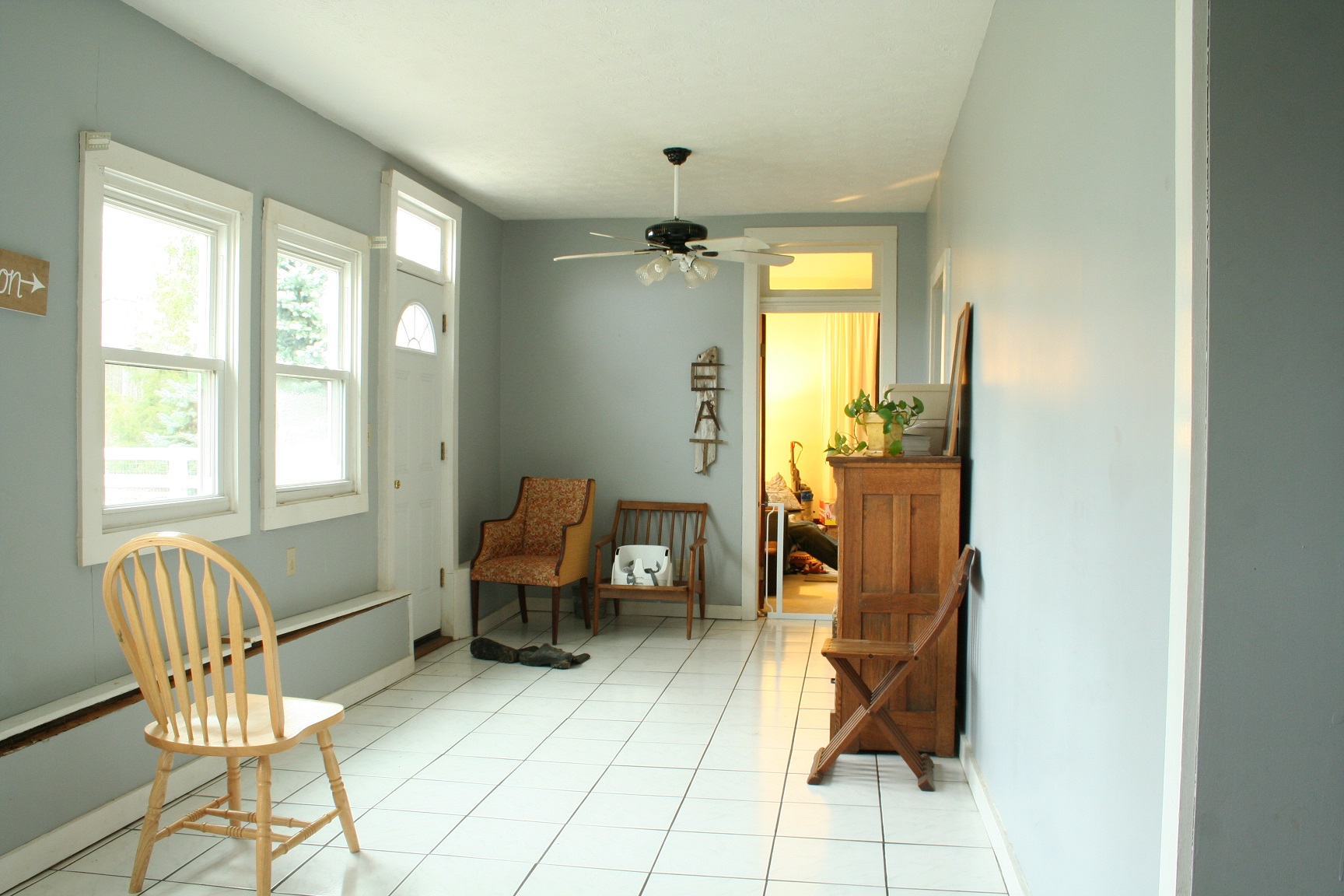 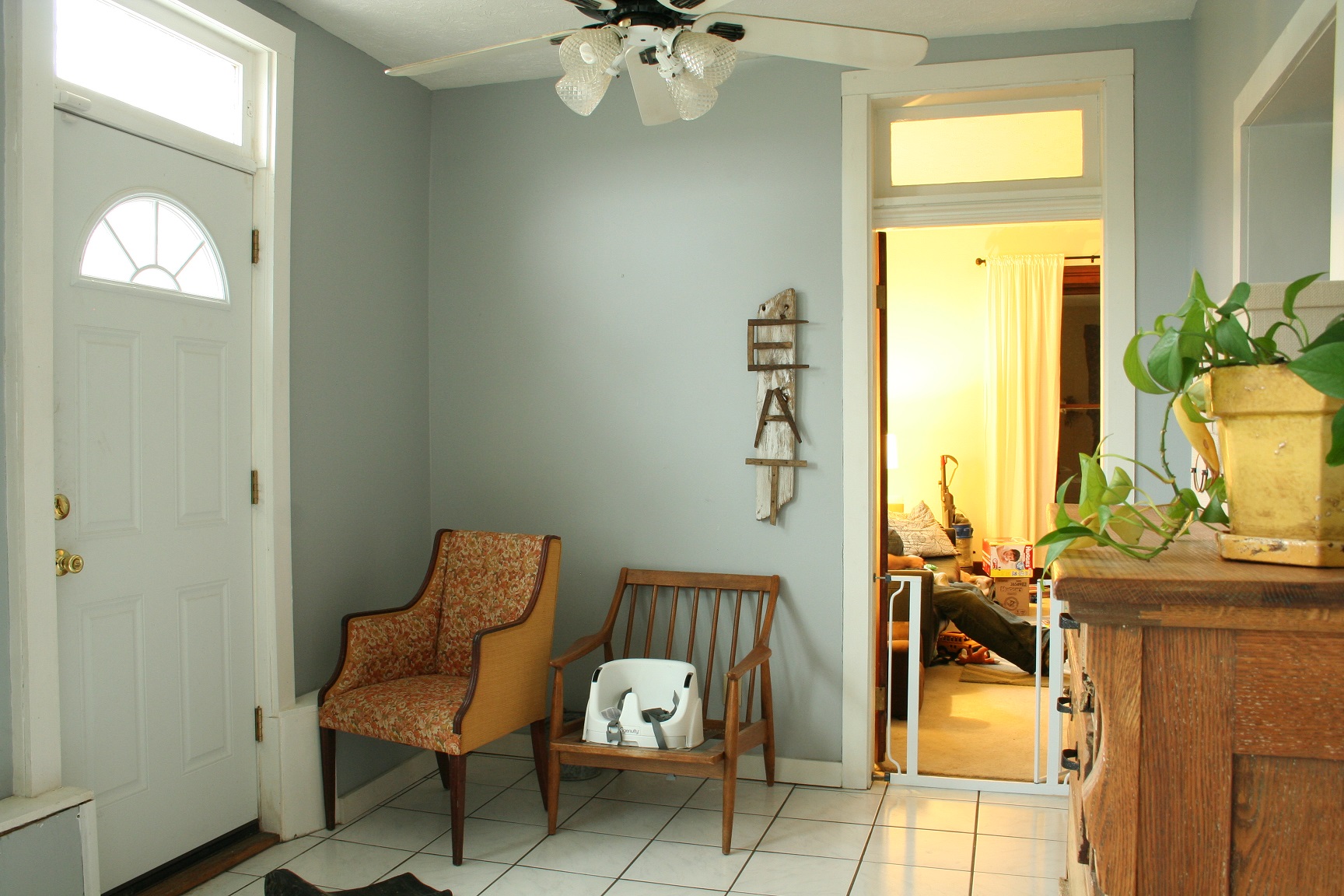 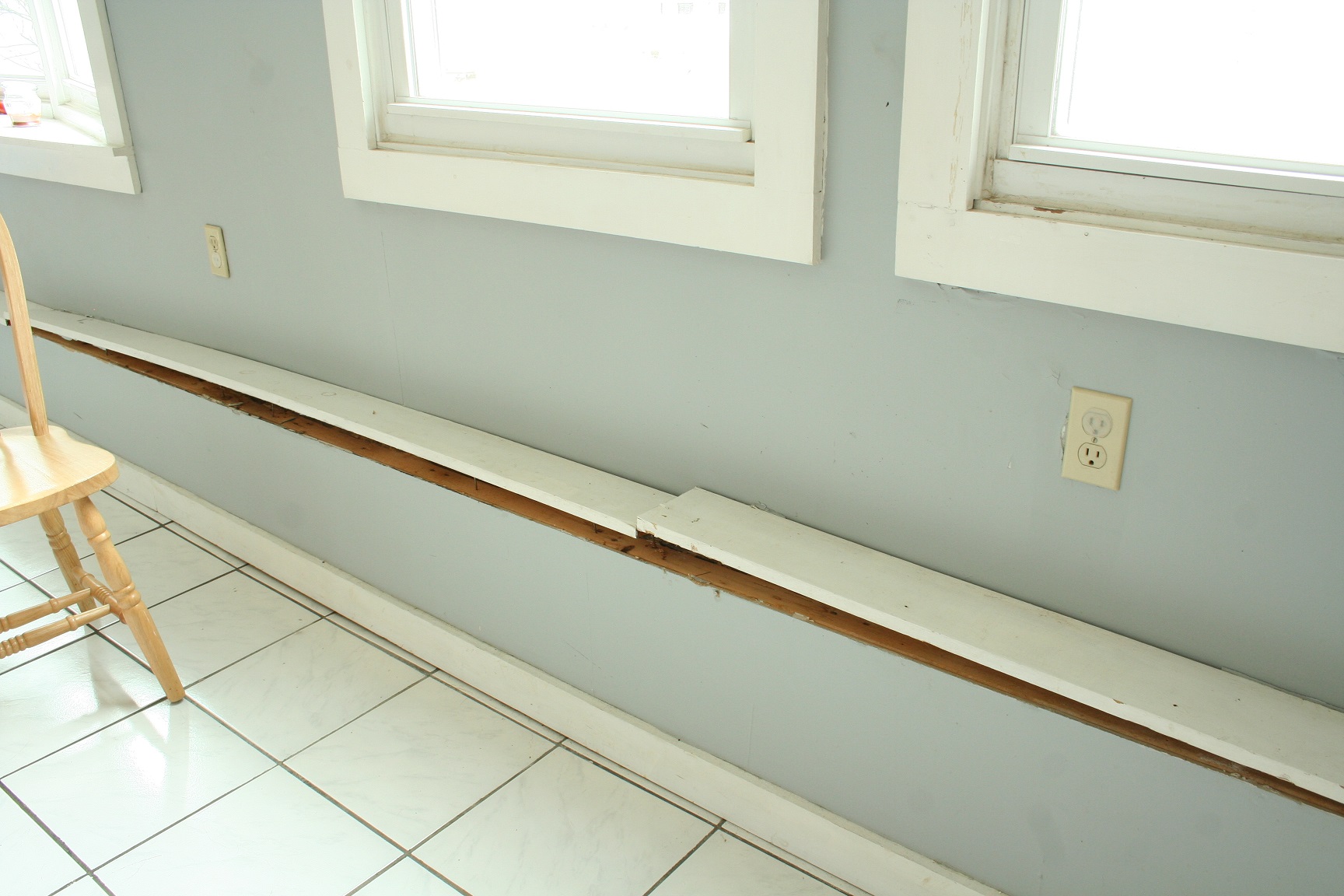 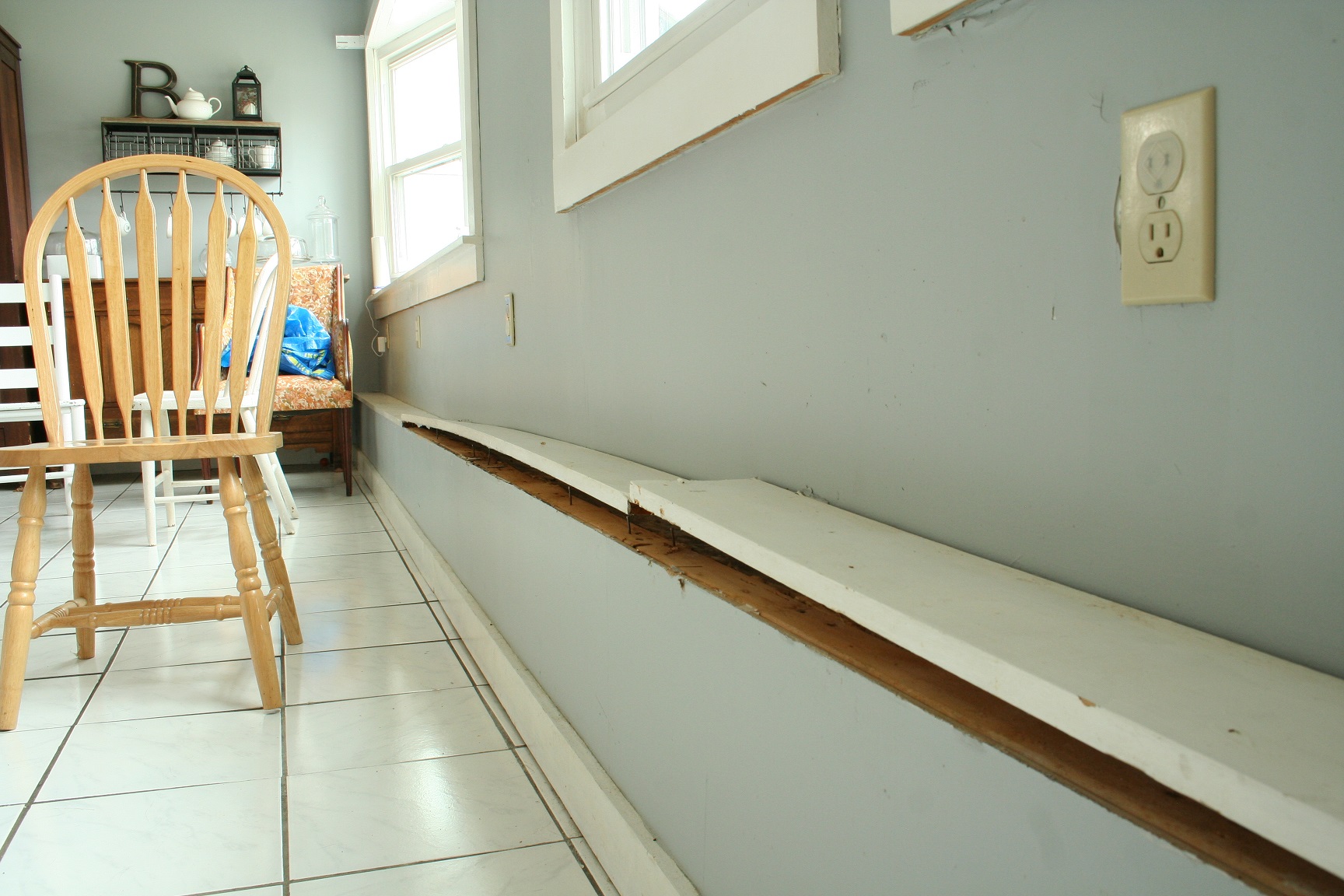 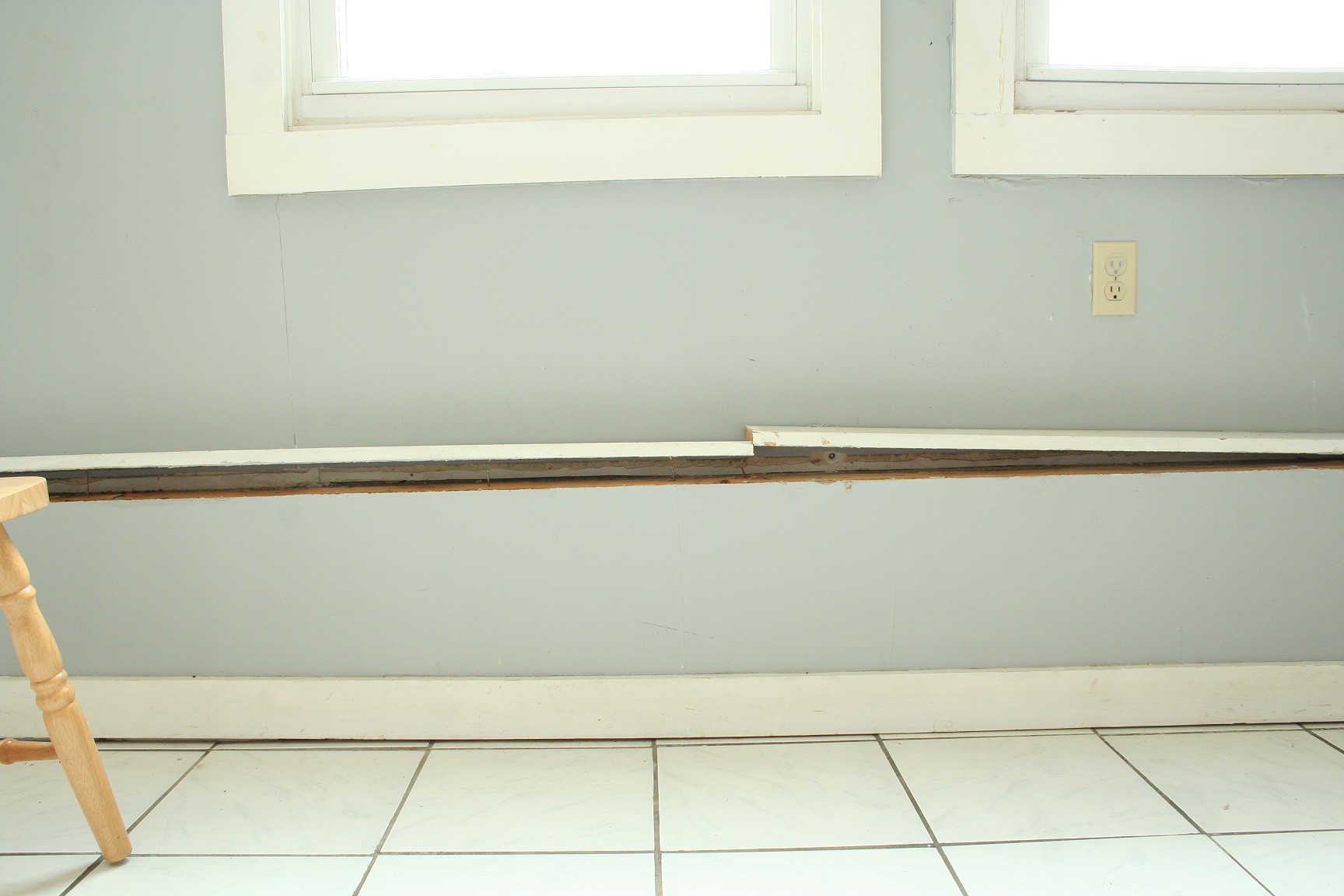 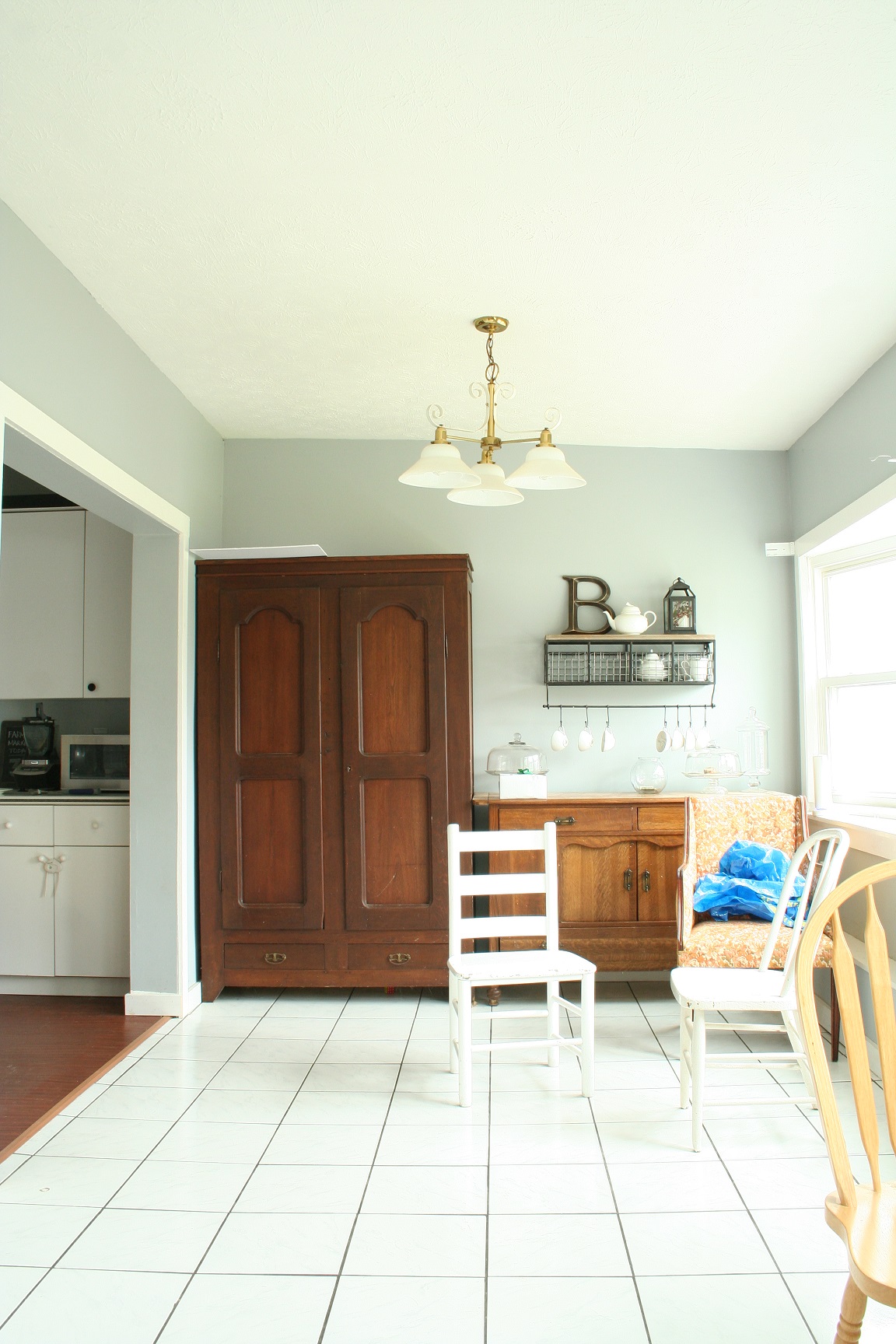 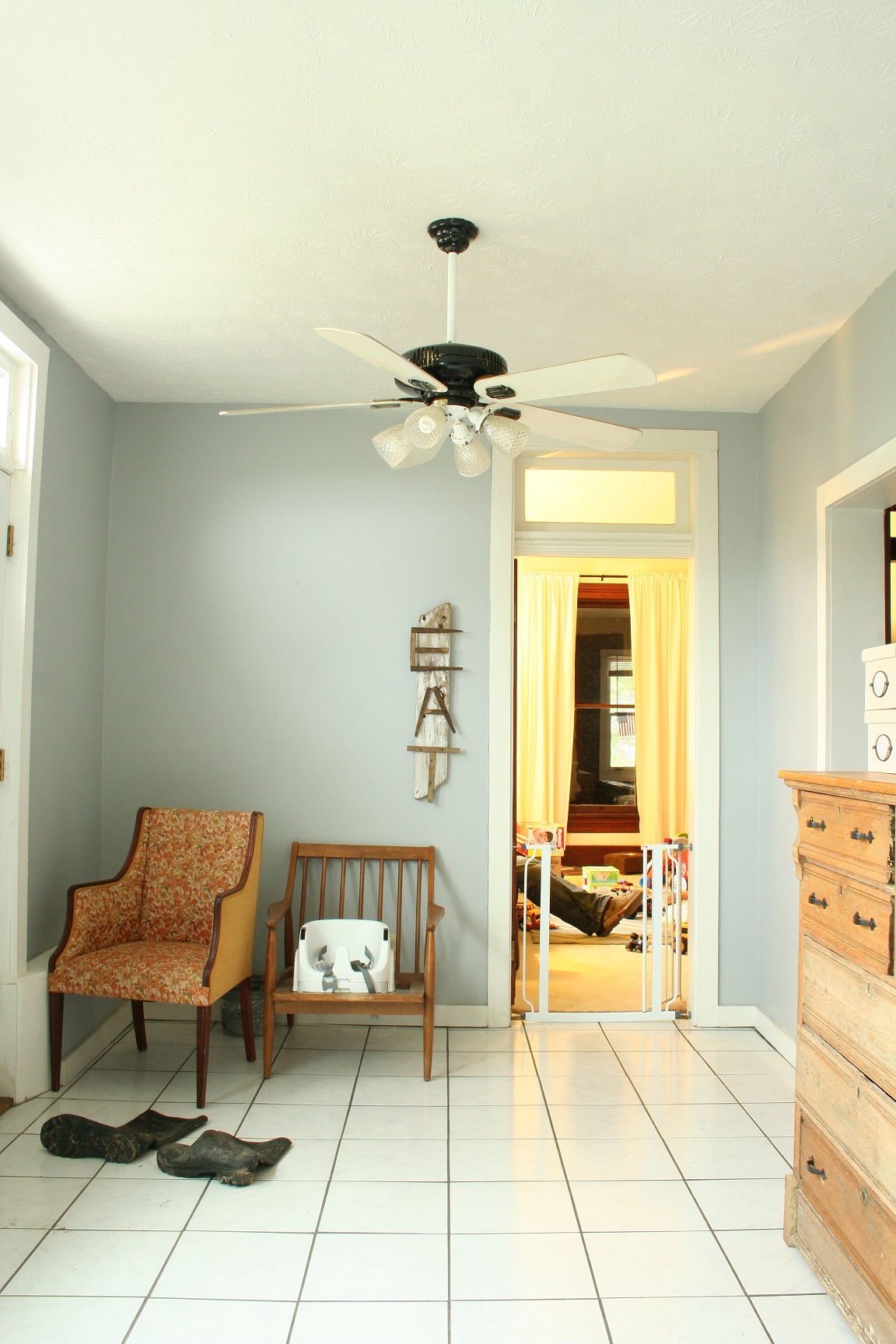 I took these photos after we’d already moved some of the furniture out.  If you want to see more before photos of the space with furniture in it, you can take a look at this post.)

You’ll notice some detailed shots of the little jut-out-sort-of-wall-thing that we’d already started to pry up.  One of the biggest changes we wanted to make to this space beside lay new flooring and paint, was to remove the awkward little shelf wall that follows the length of the room. We speculated for the longest time why someone even added it. (Plants?)  For us it was simply a dust magnet, a place for our dogs to rest their muddy paws so they could peer out the windows and a really weird way of taking up a half a foot of floor space down the length of the room.

As we began demo of the jut-out we quickly learned why it existed.  At the base of the wall was a cinder block foundation.  Say whaaat?

Yeaaah. Honestly? We have no idea, ah the joys of owning an old house, but it likely has to do something with the fact that this room used to be an outdoor porch and somewhere along the way some one closed it in to make a breakfast room of sorts. Bottom line: there is no getting rid of that stupid ledge!

Bummer right? Yep, we were stumped. But then after some thinking — and an exciting late night conversation — we stumbled upon our best design idea yet!  We decided to create a built in bench that spans the length of the entire wall and then bank it into the back wall. Creating for a perfect spot to sink our giant farmhouse table back into!  It’s honestly my dream scenario, and we would have never discovered it if we hadn’t had the serious limitations we were presented with.

By demo-ing the wall we also were afforded the opportunity to discover some serious lack in insulation — the reason that the room is FREEZING cold in the winter time.   Like can’t-step-on-it-barefoot-cold.  So that was a score too.

Nick laid most of the floor in a few days and has been working on trimming it out and planning the bench the last couple of weeks. I took these last few photos late last week and then we moved our table back in on Sunday (so that is not pictured), but we’re feeling extremely pumped about the difference in aesthetic and warmth the flooring adds to the space so far.

I’ve said it before and I’ll say it again: living in a space for awhile to assess  your form and function needs + desires of that space has definitely been the way to go for us. Although some days I wish we’d been able to afford reno-ing everything before we moved in so we didn’t have to live amidst the chaos and just enjoy nice finished spaces — taking it the slow and steady pace has really worked for us. 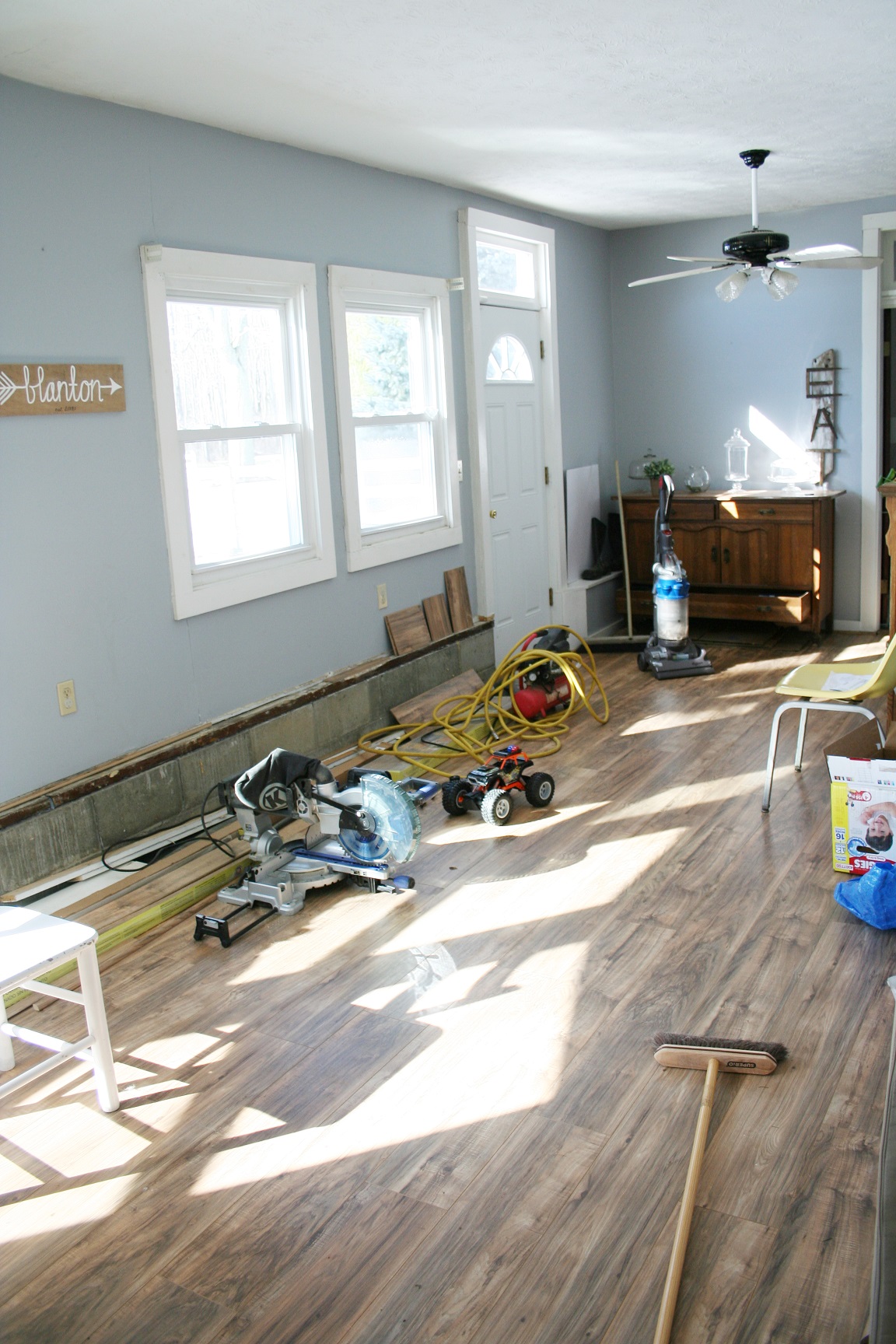 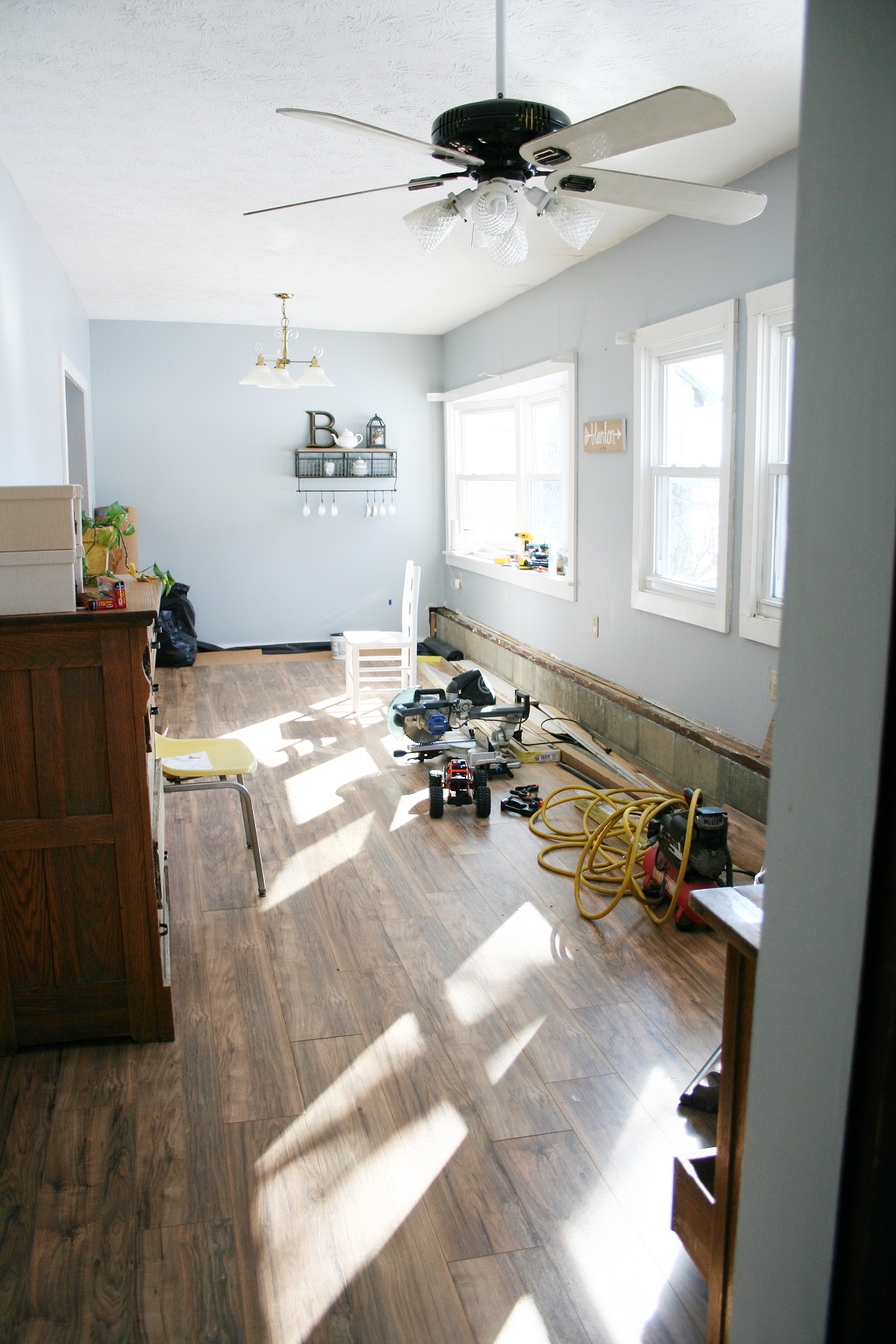