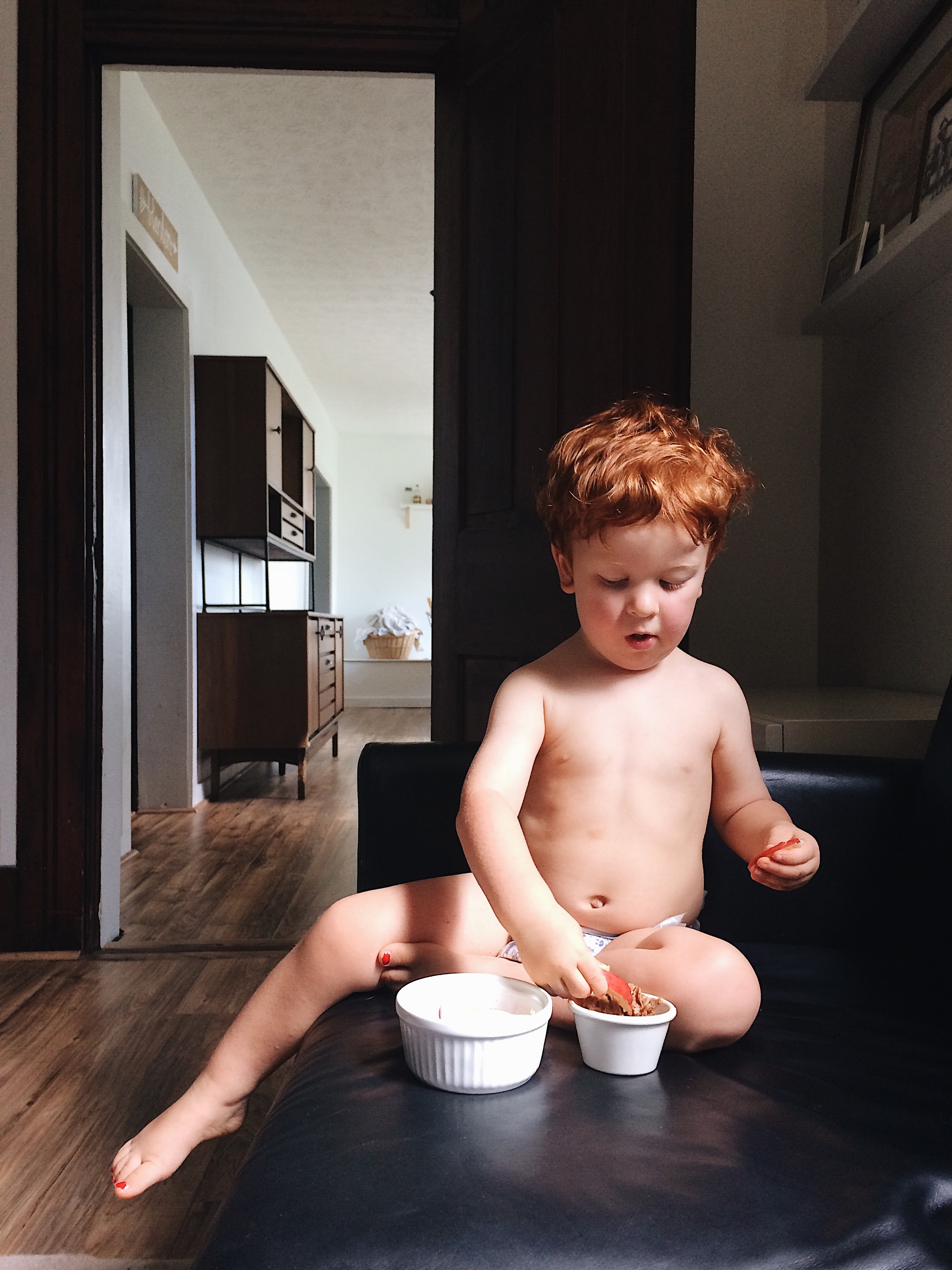 Almost six months ago my baby turned two. Thurser turned TWO. How’s that for an alliteration?

We celebrated with a small birthday party with family and I wrote him a cheesy poem about leprechauns and a pot of gold (because he’s a red head born the day after St. Patrick’s day and he said he wanted a rainbow cake for his birthday so I mean, really, how could I not?)

This motherhood thing man, it continues to throw me for loops. In some ways I feel like I’m only just getting to know him — like really know him. You know? And then within the very same stream of thought, I’ve known him for ages. Eons.

I wrote a letter to Wyatt on his second birthday. I never felt compelled to do so at year one — with either Wyatt or Thurser — but at year two? I definitely feel urged to do so. And now that I’ve let almost another six months slip by with out doing so…??

I remember the first words I spoke upon your birth, the doctor and Daddy simultaneously handing me your tiny vernix covered body, were, with great exclamation: “he has light hair!”

Over the next few days we would waffle back and forth between calling it “strawberry blonde” and “full on redhead” as it dried, the light changed, and so on.  But nonetheless I suppose it has always been just as remarkable as it is today, from the very moment you were even born.

As you’ve grown older I’ve found that many others find it just as remarkable as I did that day. Commonly heard while at the grocery store, playground, local ice cream shop, [insert any other place, ever, here]: “Oh! Would you just look at his hair!”

Some would even like to warn me against your fierce tendencies, the ones that apparently naturally extend from those luscious fiery locks atop your head.  I’ve discovered myself feeling protective,  careful to not allow those words to bring about self-consciousness in you, or worse, to them them define you.  I’ve felt strongly the urge to guard all of us from preconceived notions and self-fulfilling prophecies.

But I’ve also discovered that while your hair shouldn’t/doesn’t/won’t define you.  It does embody you.

You are remarkable.  You weren’t talking much around a year old,  mostly just fierce “rawrs” here and there.  But from one day to the next when you knew and spoke all colors, and then again knew and spoke all shapes, when you remembered a finite detail that no one would ever think a boy so young would pay any attention to, etc.  I learned more of your remarkable nature.  That you would always remain silent until you really had something to say.  And then you would likely blow all our socks off with what you had to say and the words you used to say it.

You are fiery.  You know two thresholds of discontentment: annoyed and livid.  (Haha!)  Heaven help any soul that crosses you in the future.  You are an ultimate protector with unbridled passion.  I pray that I am able to parent you in a way that keeps you from getting sent to the principal’s office every time someone says something mean to you (or anyone in your vicinity) — but that also does not break your spirit.

You are soft. While quick to anger and even bring swift justice in the form of a fist, your ability to love runs just as close to the surface.  I’ve never met another person who has so clearly highlighted my own shortcoming of not being able to quickly forgive and forget.  And at the end of the day you love nothing more than to cuddle with me, cradled just so in the crook of my arm so that your soft curls tickle my nose and I am able to breath you in.

You are playful. I sensed early on that you would have a hilarious sense of humor.  You could see clearly in your eyes the joy you gained from simply making someone laugh — and the measures you would take to make it happen. Your belly laugh is something straight from heaven and I’m so glad we get to hear it daily.  I’m excited to see how your slapstick routine unfolds over this next year.

Thurser, I love you.  I wish there were other words to describe the canyon depth in my heart that I feel when I say those words.  Words that better described how that love both swallows me up and spills out overflowing at the same time.  Love that is like a raging flood and also as vast as the ocean.  I am overcome with emotion every time I remind myself that God chose me to be your mama.

I already catch glimpses of the man you are becoming.  I see him in the crystal blue of your eyes,  the peak of your blondish-reddish brow and even the softness of your peaceful, sleeping face.