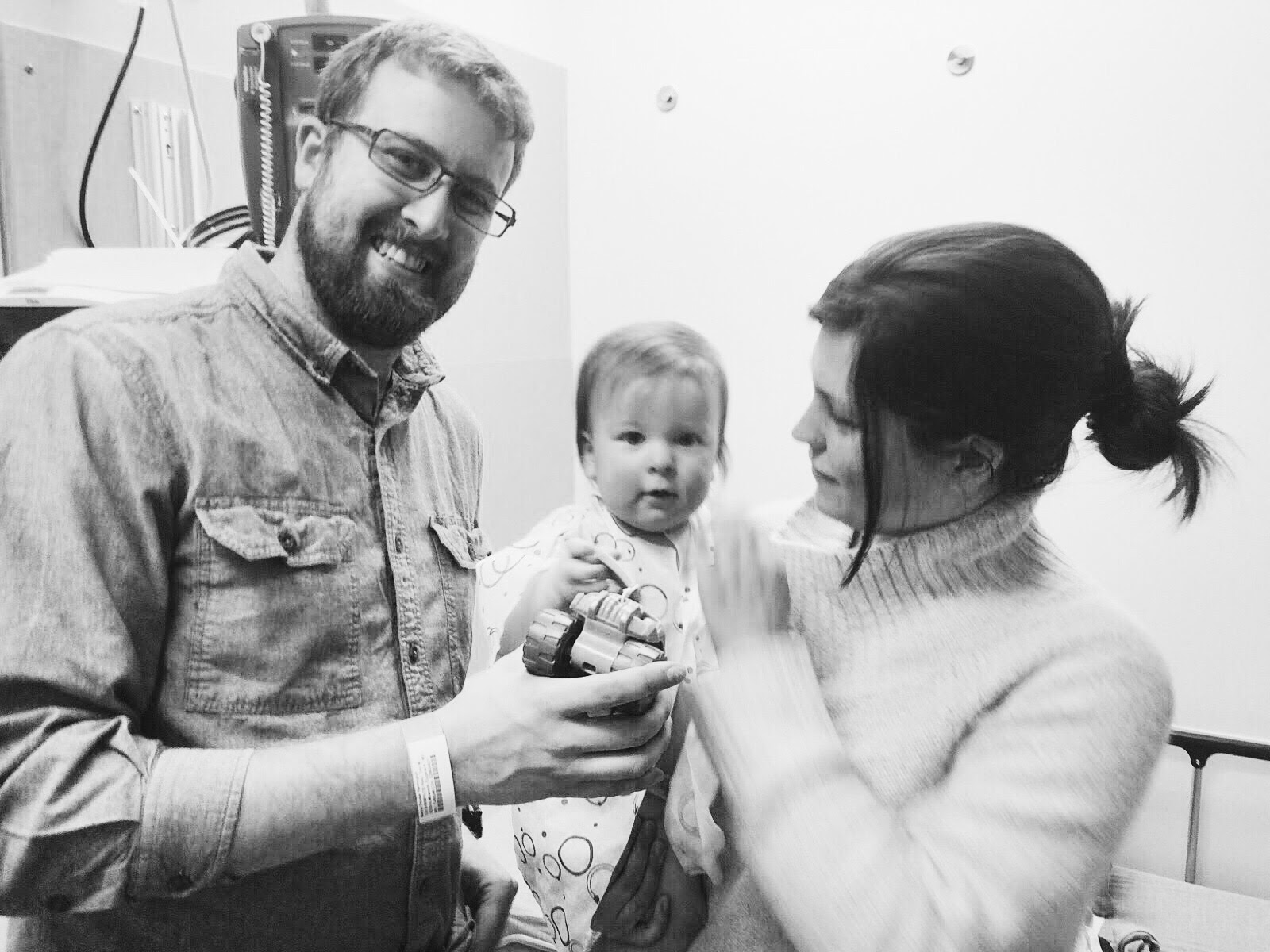 Four Fridays ago my youngest boy, then 10 months, had surgery.  Although it was a minor surgery, it was surgery. And in the days nearing the procedure, I felt myself swimming in all sorts of emotions.

I knew that it was likely, because of his age, that we (Nick and I) would not be allowed to be with him when they put him under anesthesia.  That there would be that moment of separation with him fully conscious… and I dreaded it. But I prepared myself. And I prayed.

The day came and we made our way to the hospital with plenty of time to spare. He was just a doll.  With every hi from a nurse or some other staff person he would sink into my chest and nestle just under my chin with a bashful smile — clearly an angel.

We waited through all the prep work: the paper work, the zillion questions, the signatures etc. and he became bored. He wanted to get down and move and play.

During this time that burning question I had was answered: we weren’t going to get to be with him when they put him under.

He busied himself throwing every toy, pen or book we handed him onto the floor until it was time to go.

We made our way out of the prep room (so to speak) and they took the three of us through a set of doors.  We made a couple of turns and then we paused briefly in front of a set of automatic doors. They opened to reveal a brightly lit clean room of sorts. It was a shallow, long room (maybe 6 by 12?). A small hospital bed in the middle with a few nurses dressed for surgery floating about. There was a tiered cart with baskets of toys off to the left.

Almost as soon as we’d entered the room, another set of automatic doors flew open on the other side, just a few feet in front of us. Another nurse or doctor fully dressed for surgery came through from that side.

Behind her: the operating room.

I didn’t want to. But I was prepared.

But that stupid operating room? Well it’s what tipped the scale for me.  The moment I laid eyes on it I felt the tears sting and well up so much in my eyes that a mere blink threatened to send them cascading.

With one fell swoop of an automatic door it got really real, really really fast. And I wasn’t prepared anymore.

I turned to the little guy in my arms. He was already sinking into me the way he’d done many times before that morning. With Nick kissing him from behind I whispered in his ear, “Thurs, these nice doctors and nurses are gonna take real good care of you okay? We’ll see you real soon.”

My voice threatened to crack.

One of the nurses, so incredibly sweet, said to me ” Okay mom, now when you’re ready we’re gonna try and do a real quick exchange and whisk him over here with some toys to distract him.”

I wanted to thank her right then and there for laying it out so clearly for me. Her words felt like a life raft in a raging, storming sea.  She must have known.

So many deep breaths.

And then the exchange was made.  I felt like I practically shoved him out of my arms — the only motion that was going to allow me to let him go. He strongly resisted. I began to walk away and as I turned to look back at him, he was crying. I said “It’s okay baby. I love you.” And it felt like it took everything I had to just walk away.

It was 12:17pm when the surgeon came to get us to tell us he was out of surgery.

He did fantastic. We were with him as he woke — I nursed him even. All things considered he did freaking amazing. Back to his little old rowdy self that night. We truly couldn’t have asked for things to have gone better…

But this isn’t a story about being a medical advocate for your child, about trusting a complete stranger with your child’s life or even extending every last bit of faith you have to God.

I did all of those things that day, and more.  No, this story is about that feeling:

The one that took me aback as I laid eyes on that expansive operating room. The one filled with people with masks, big bright lights, shiny metal tables and the unknown. That feeling of unpreparedness and overwhelming — drowning even. The one I’ve felt so. many. times. throughout motherhood. The one I keep thinking I’ve curbed, crossed off or mastered and then strikes again at the most unexpected moment.

Love him. And trust Him.