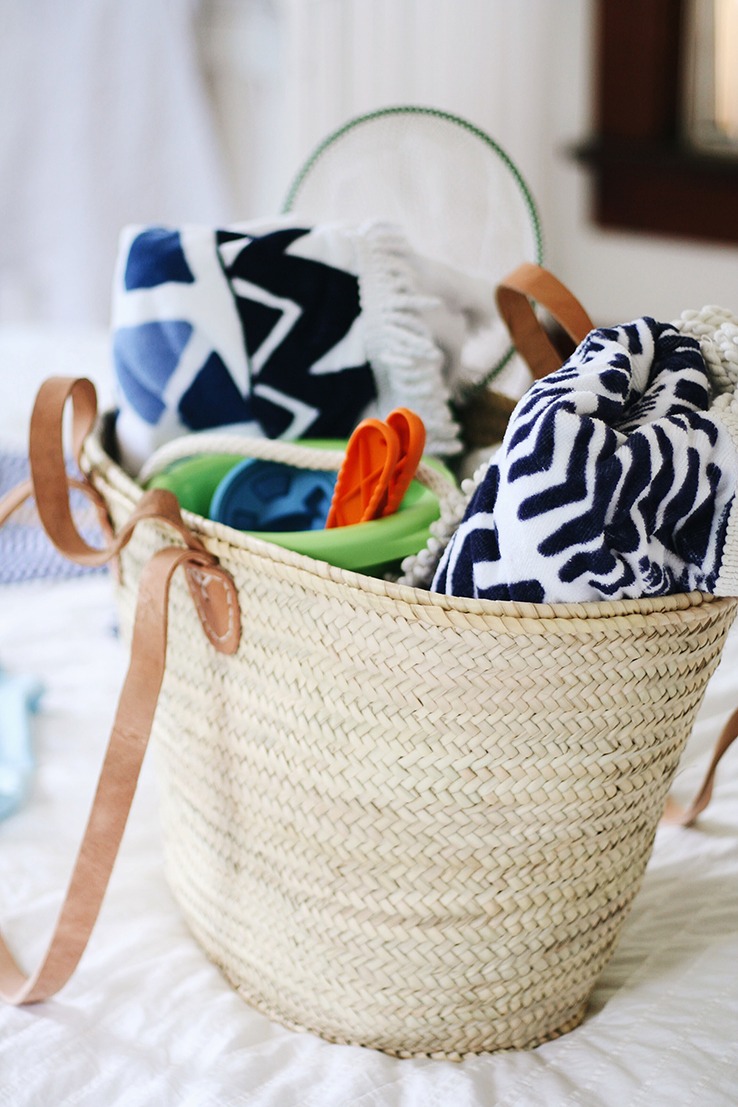 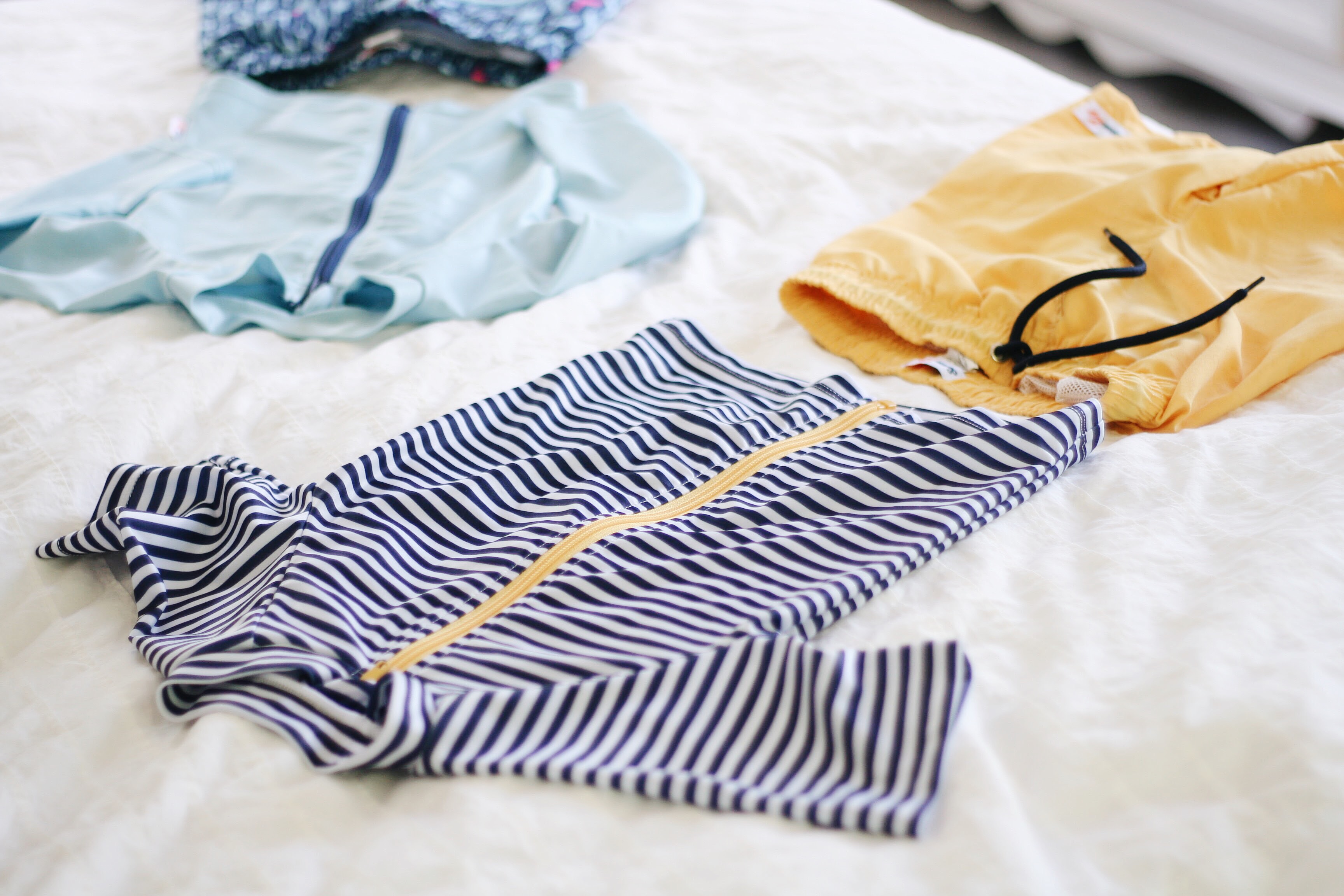 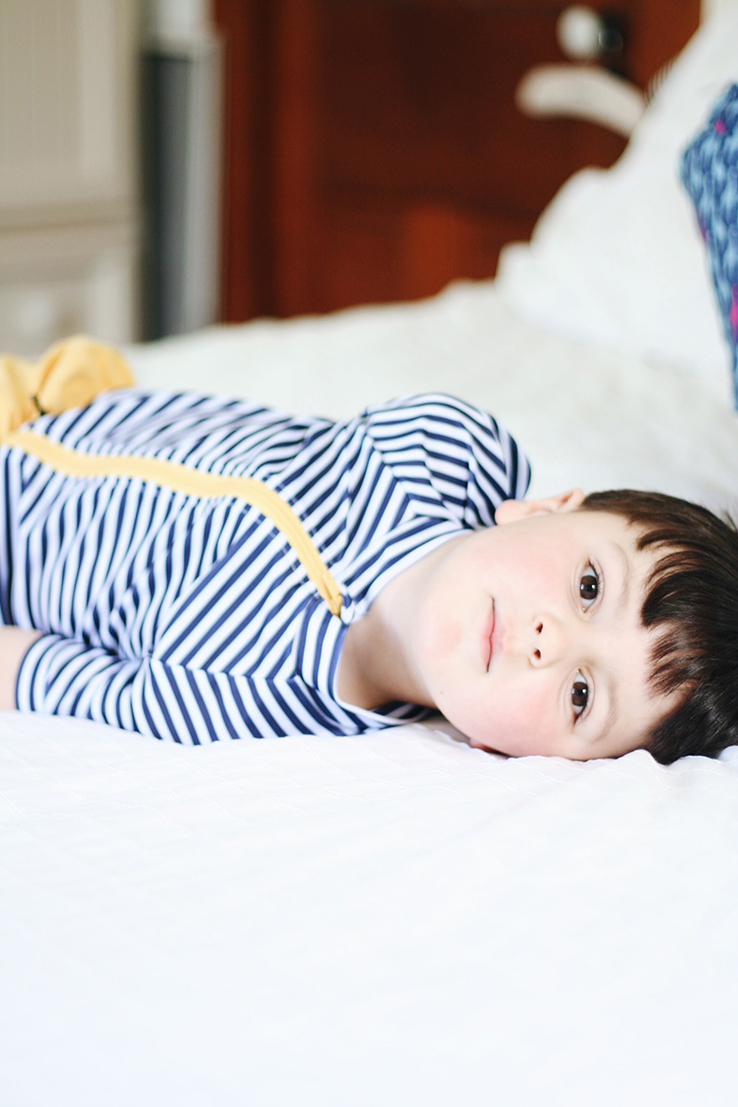 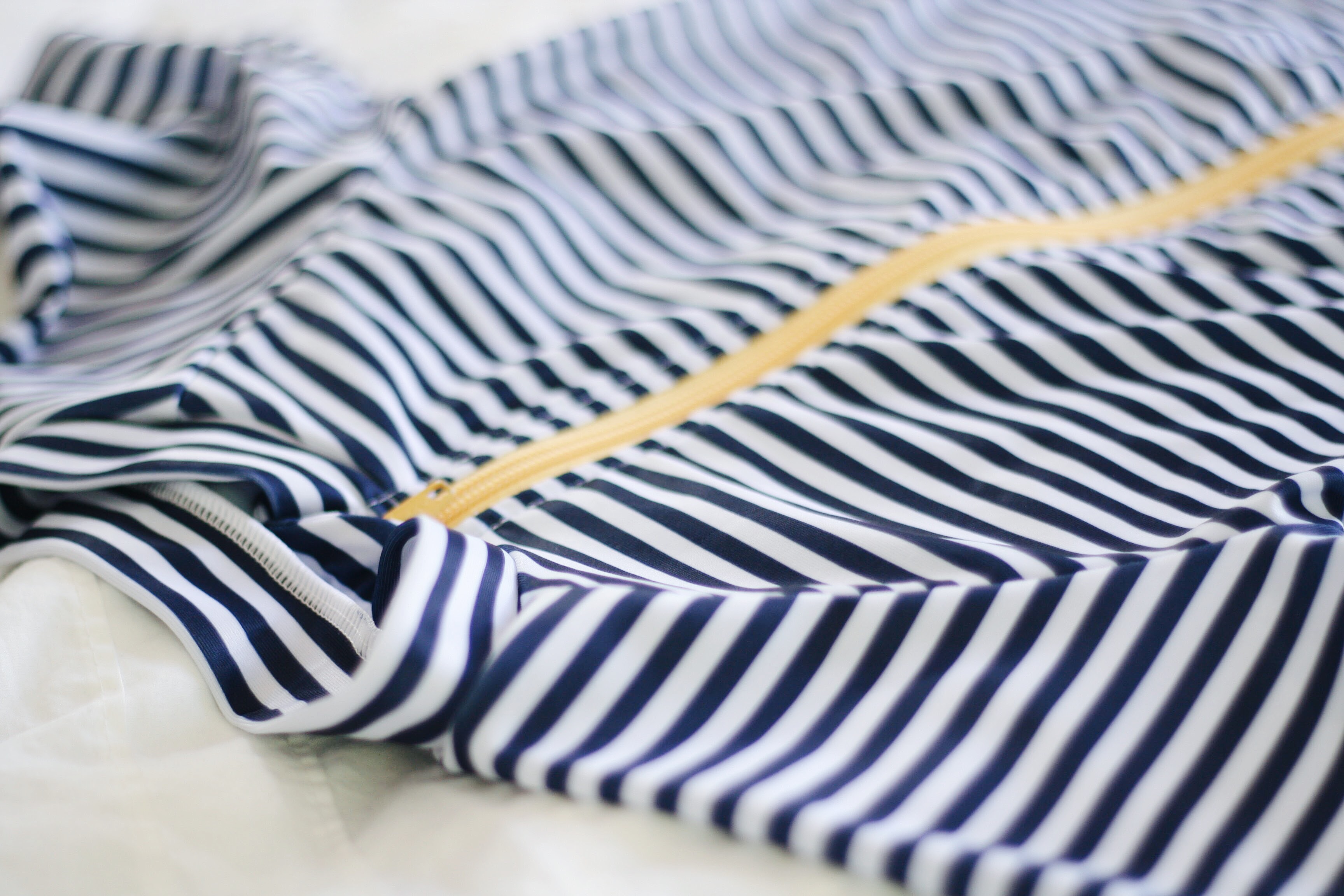 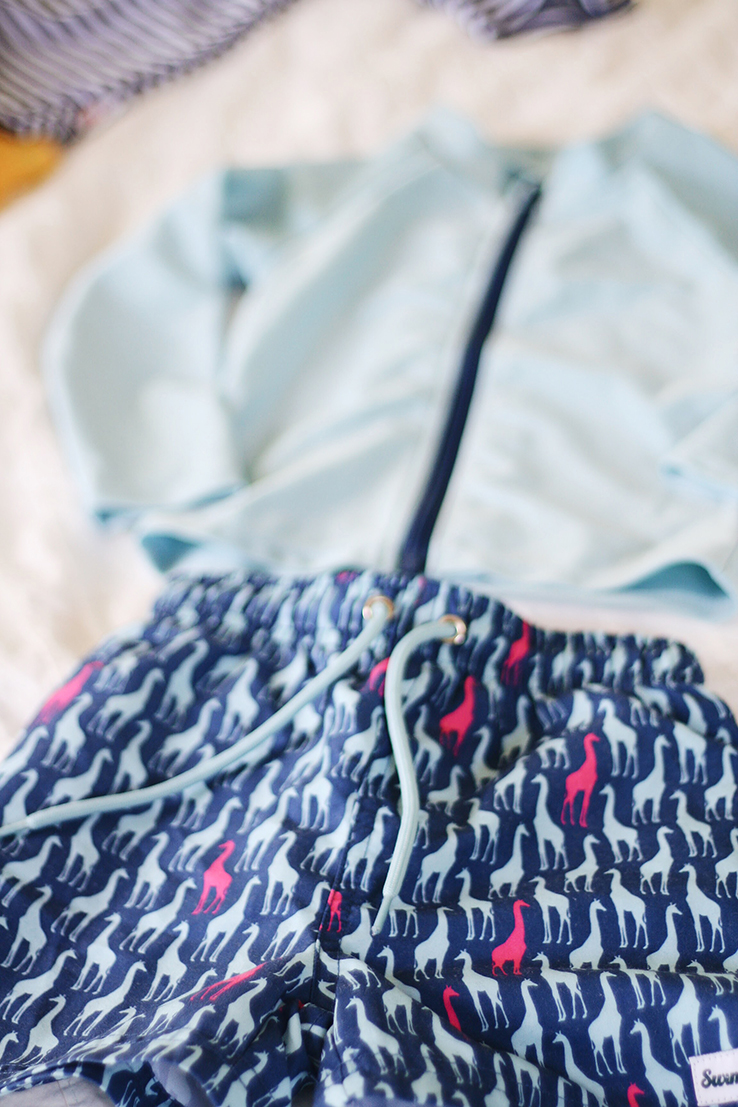 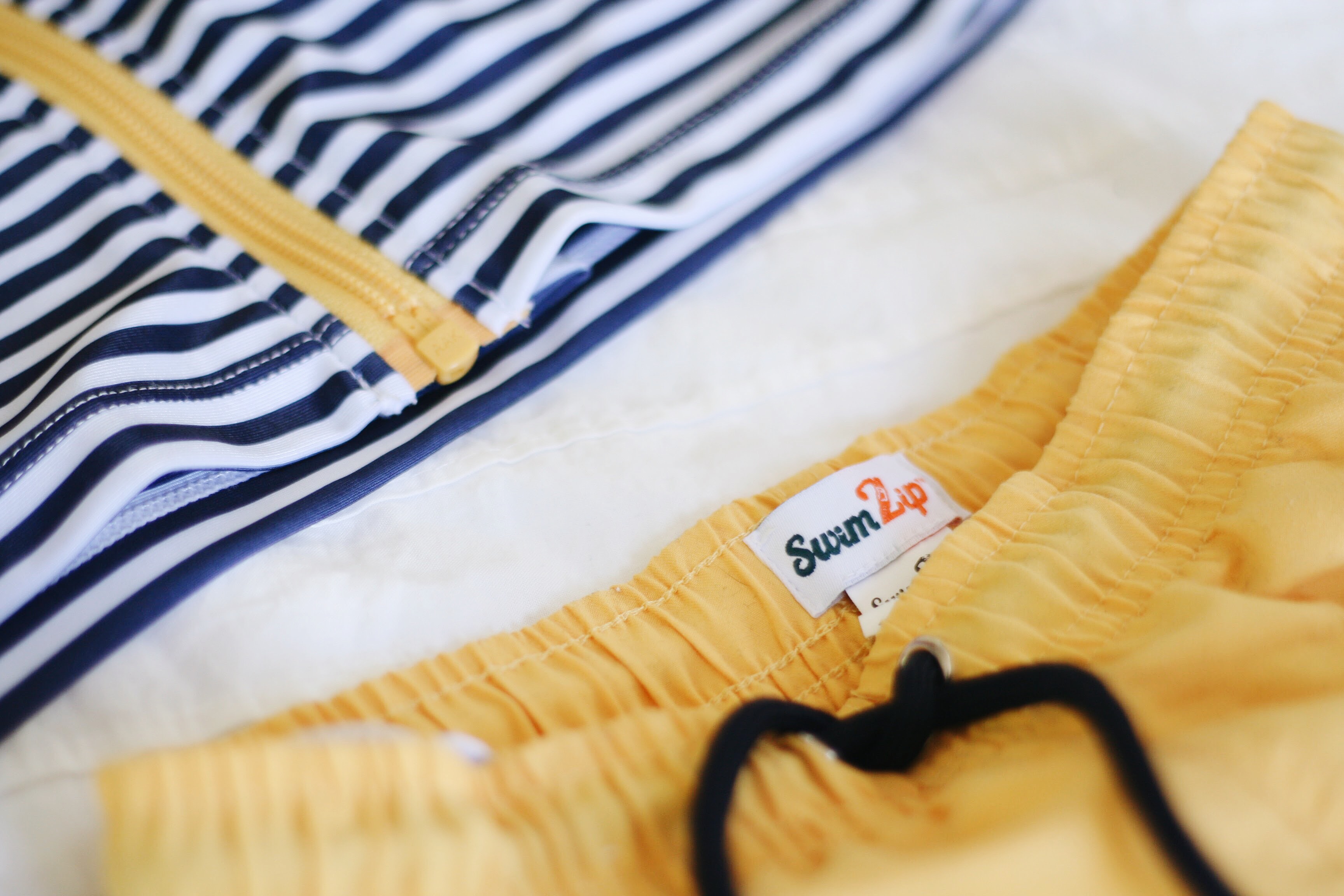 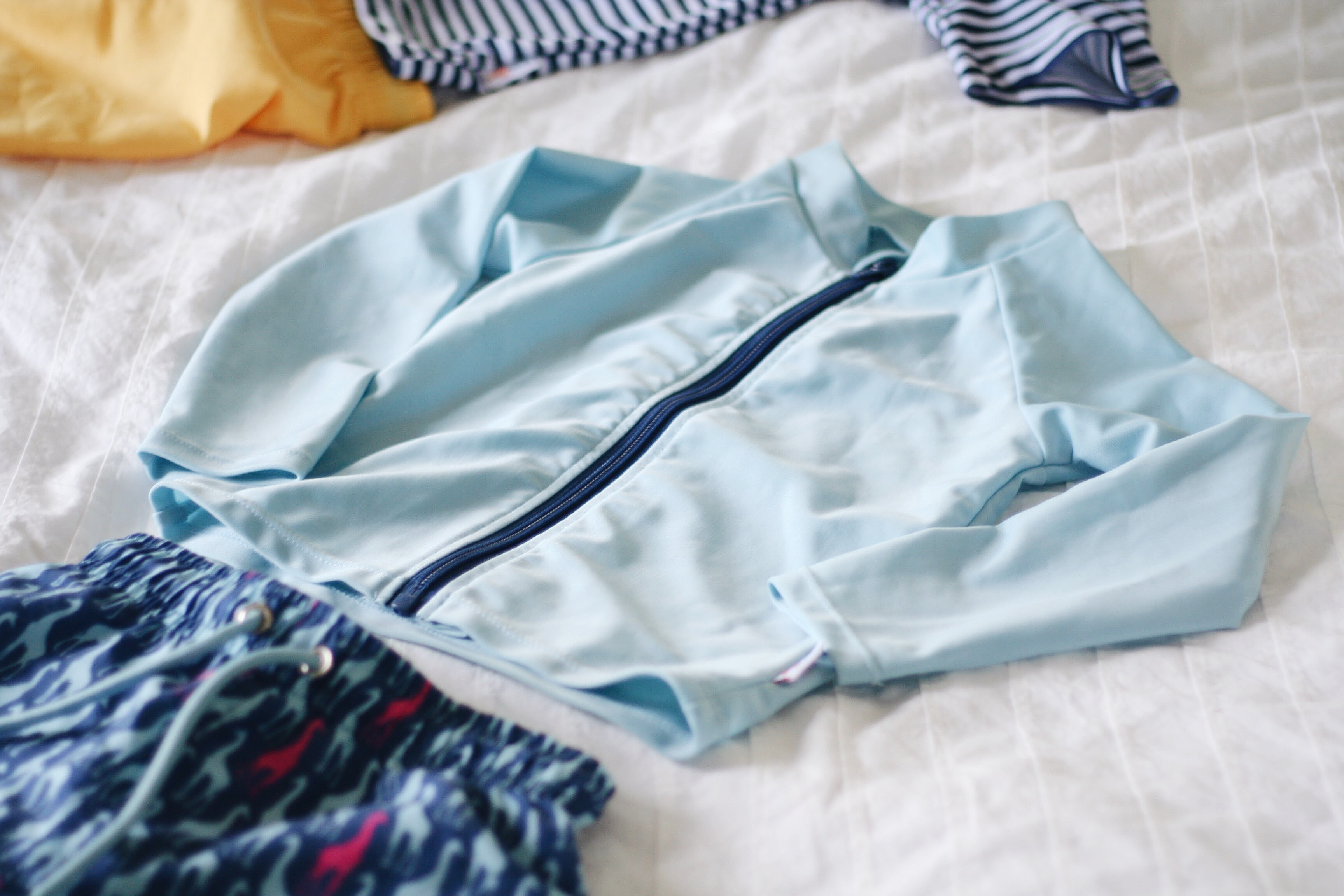 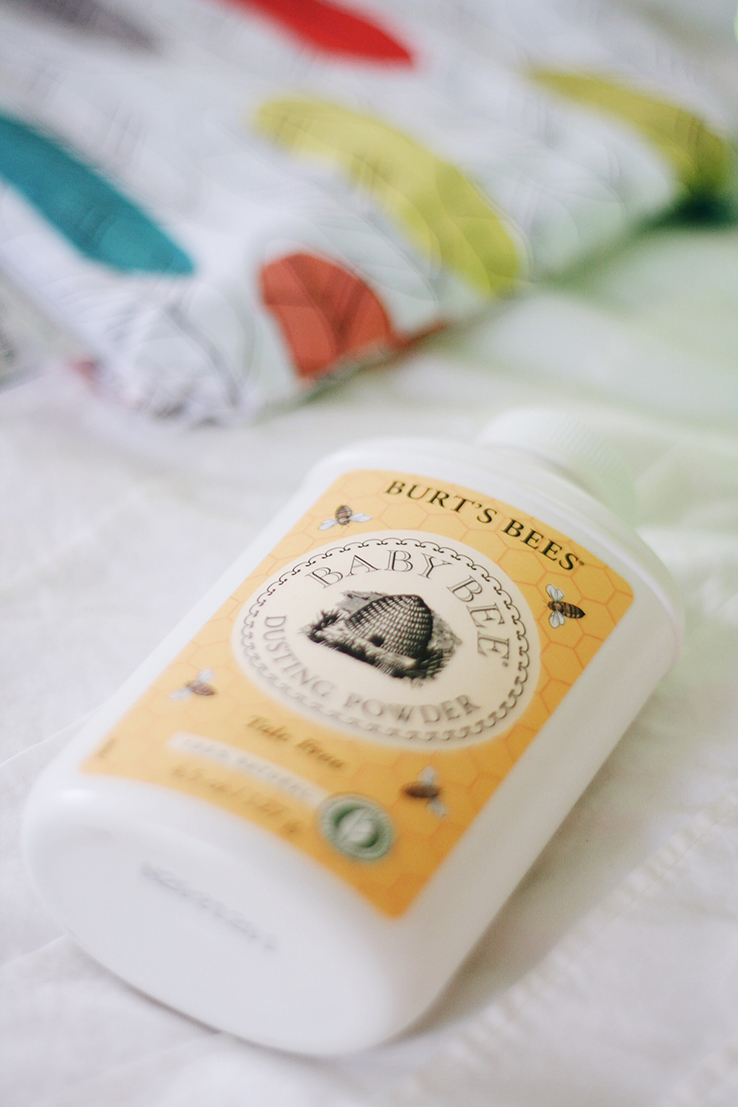 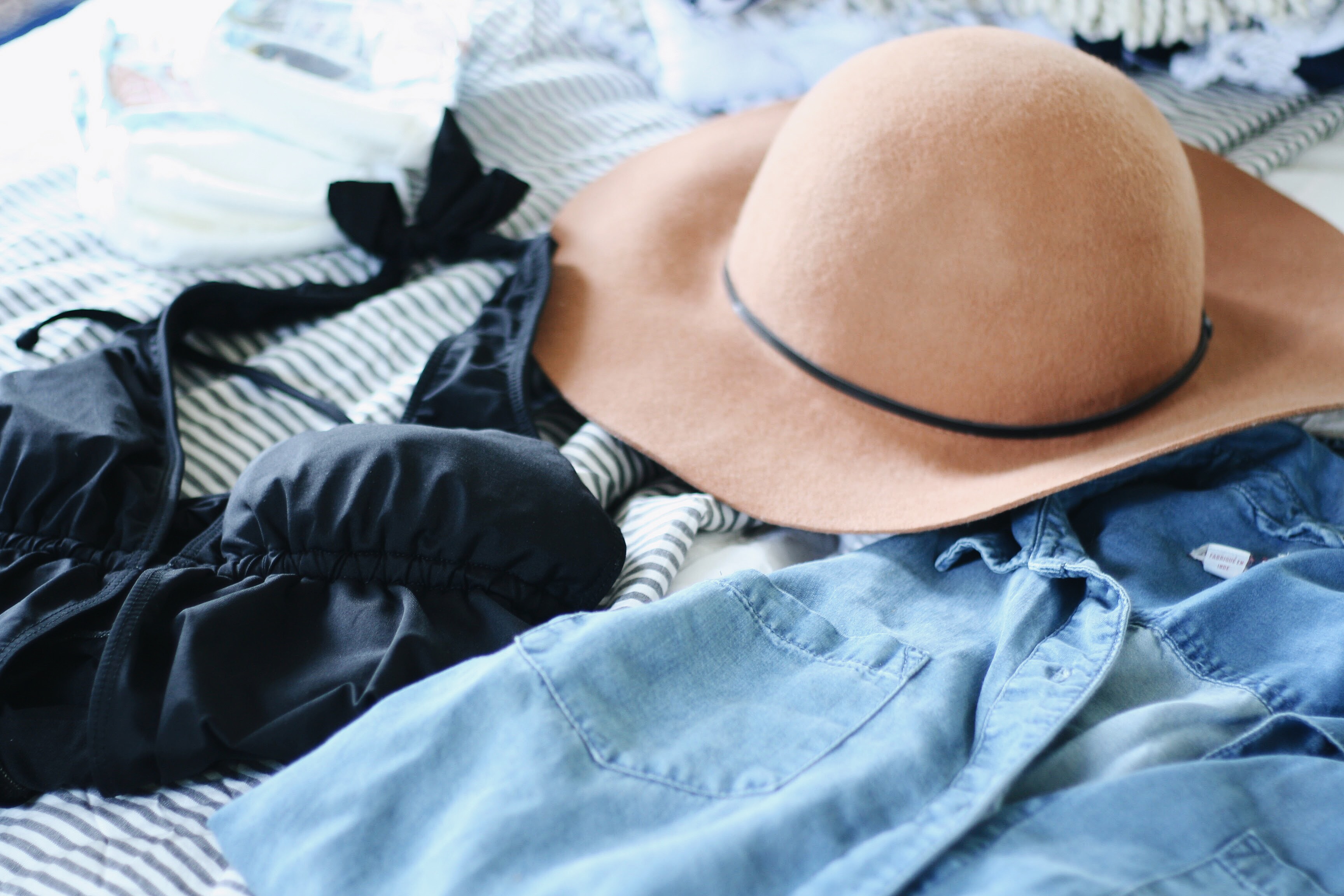 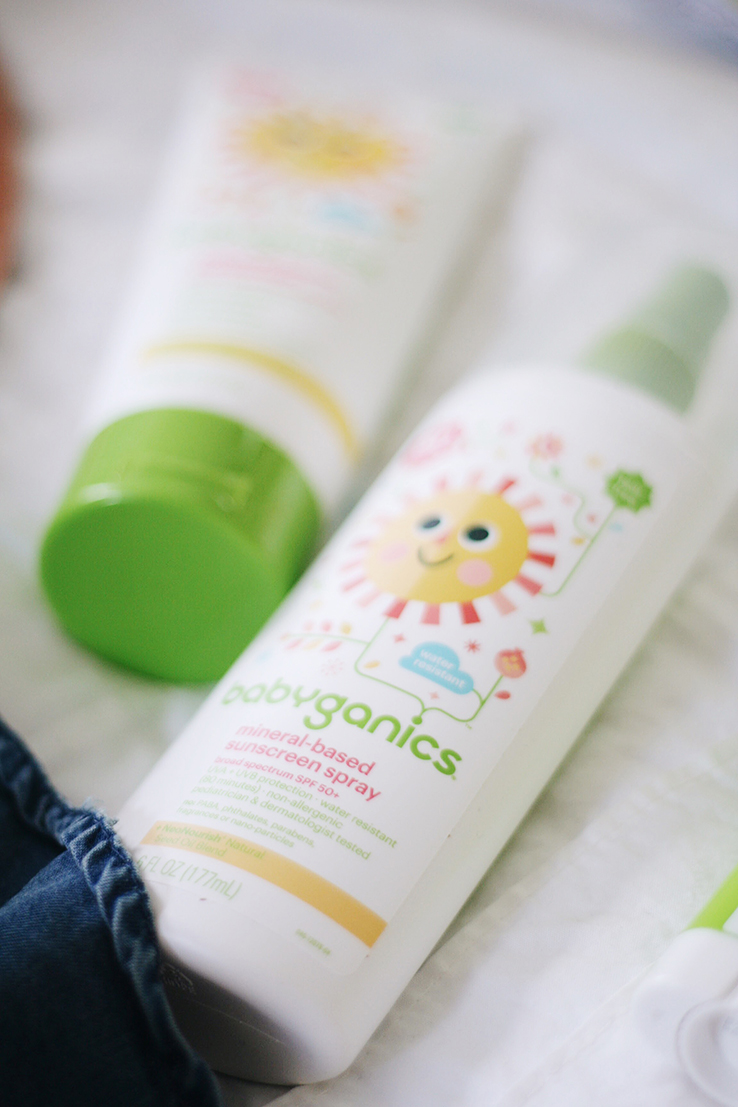 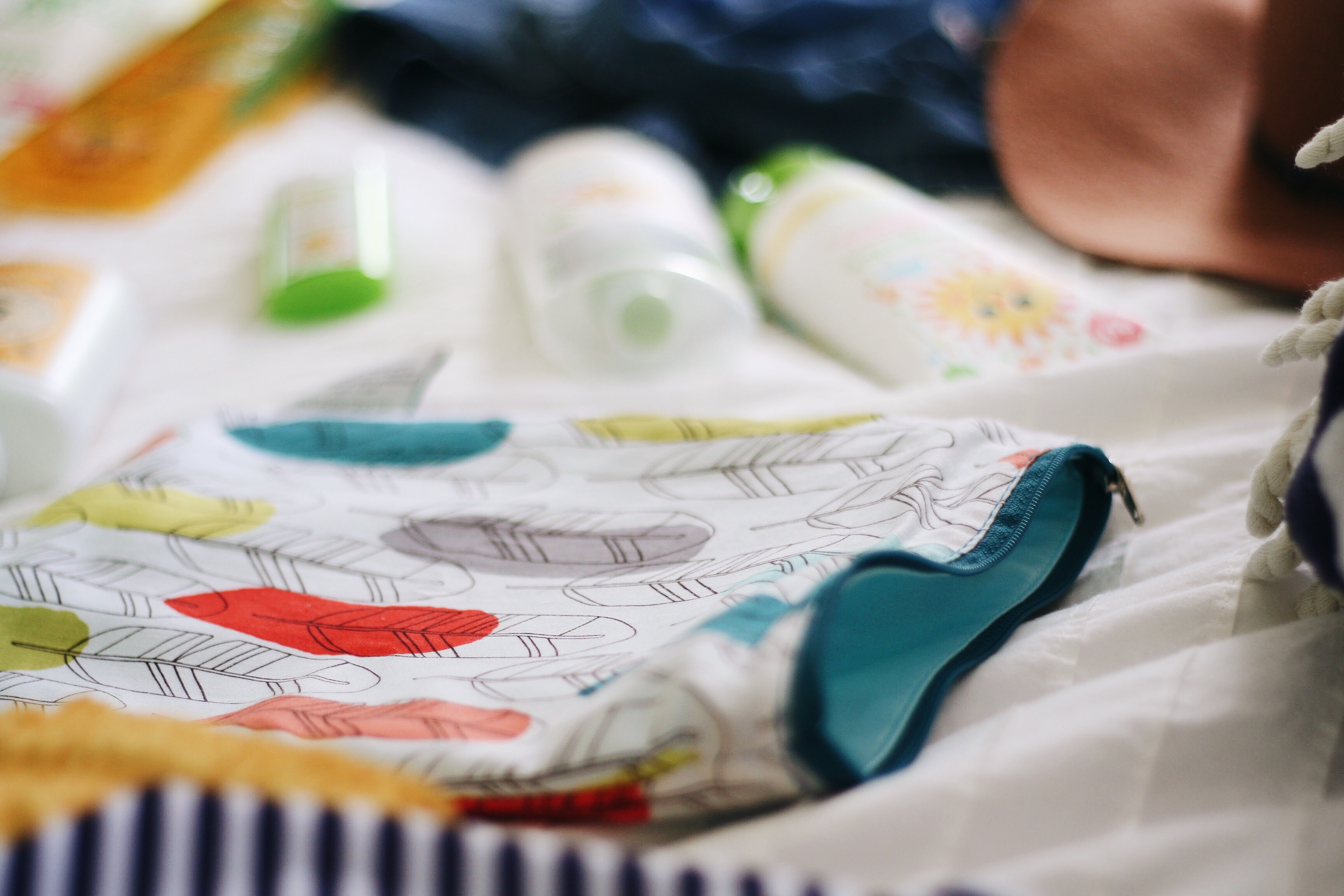 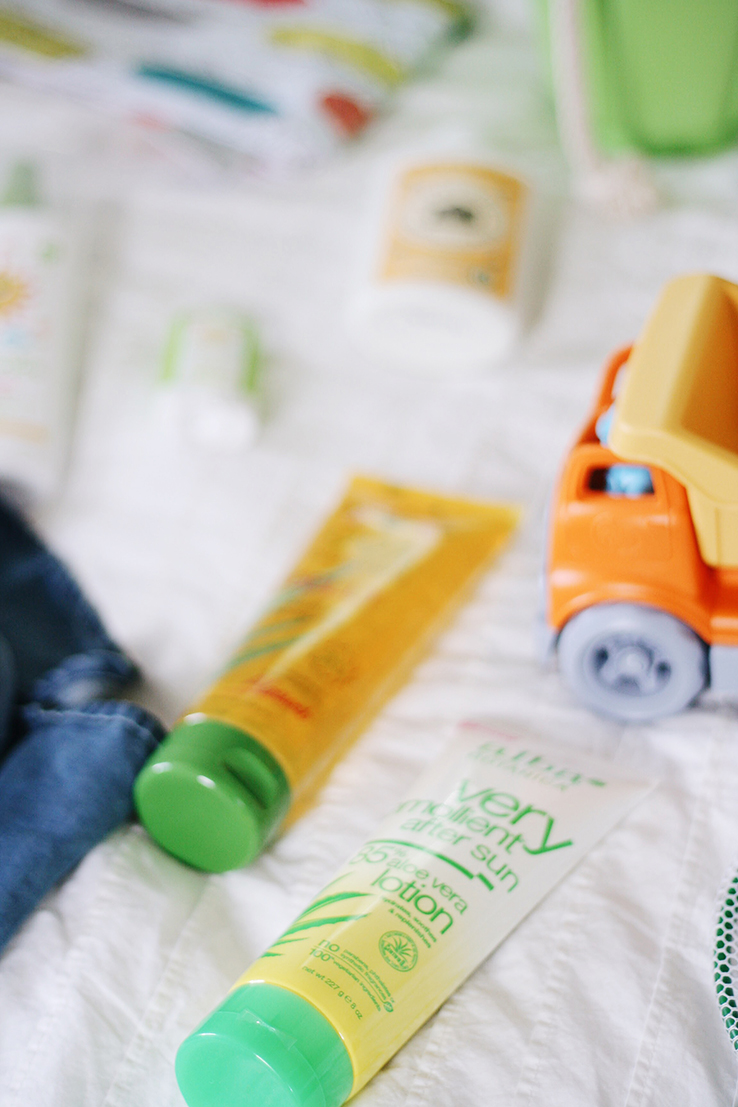 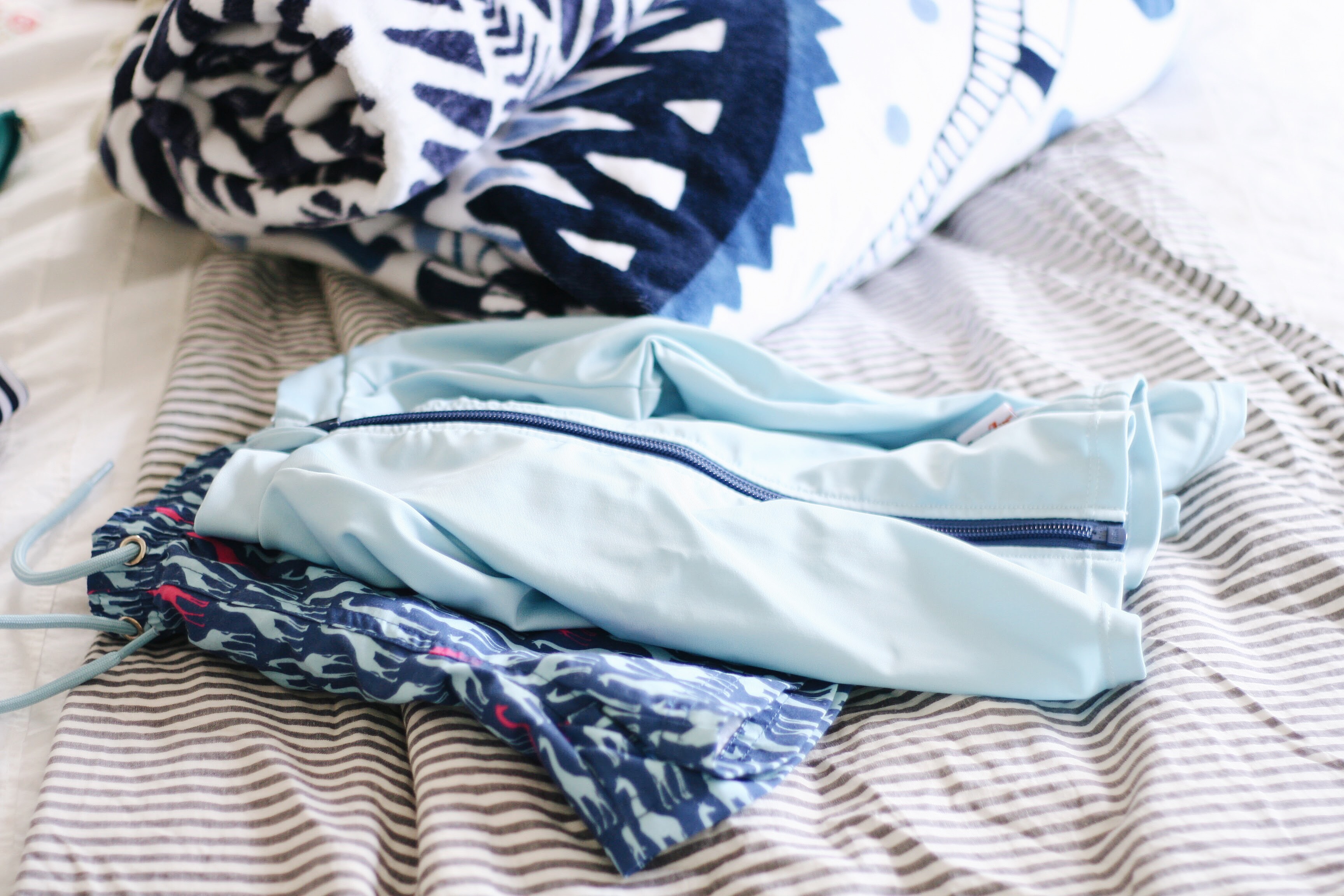 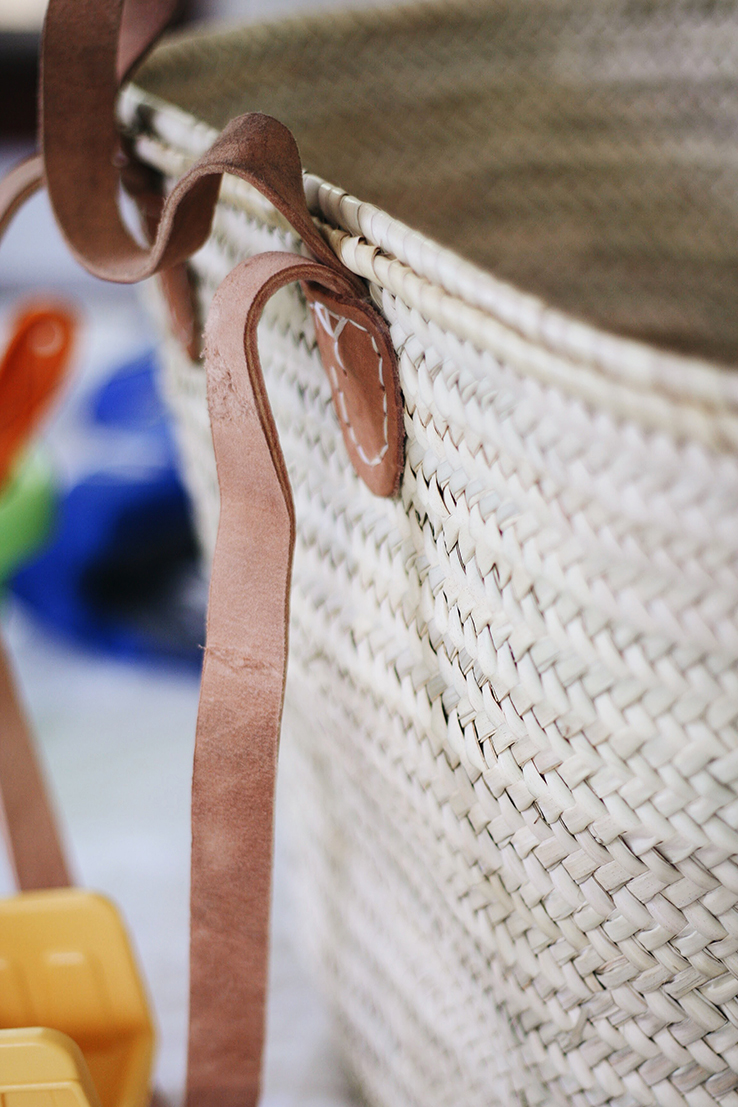 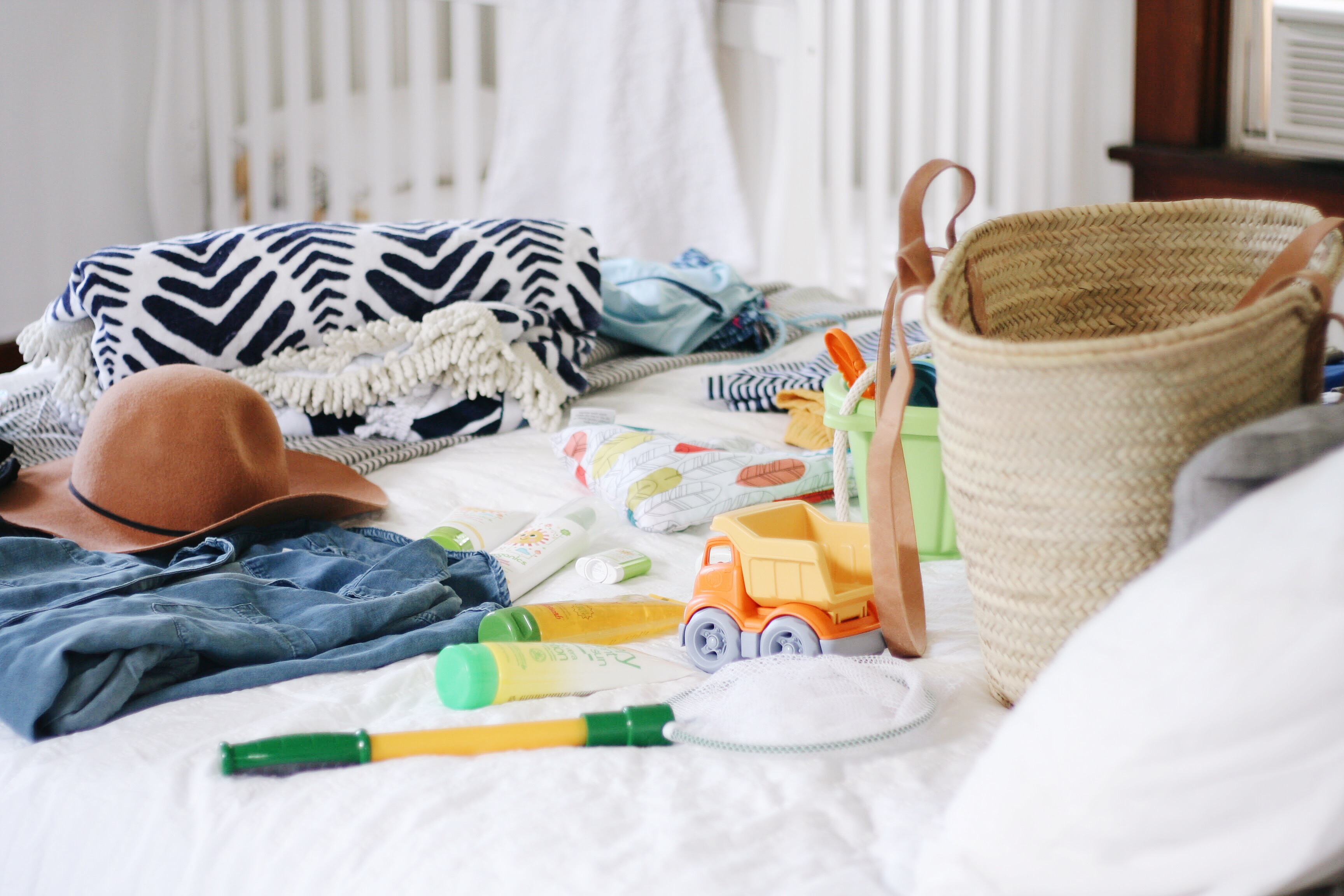 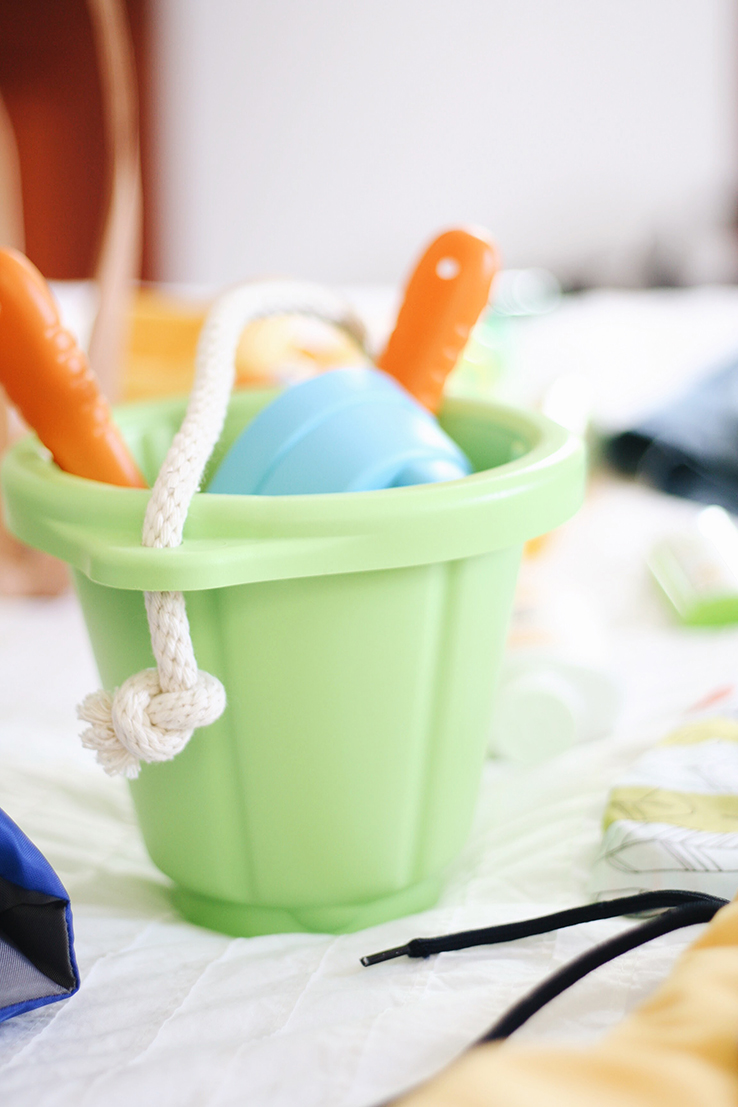 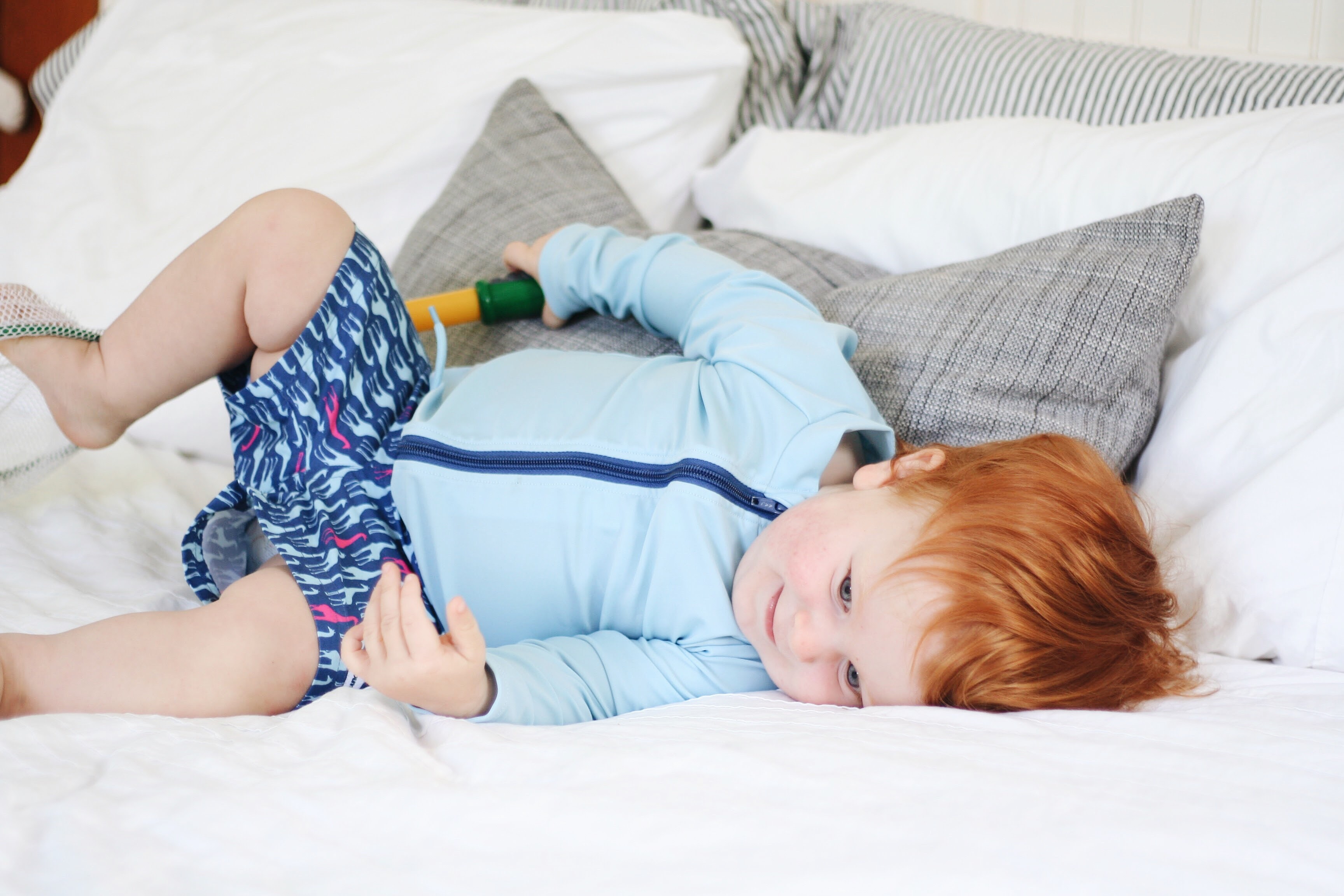 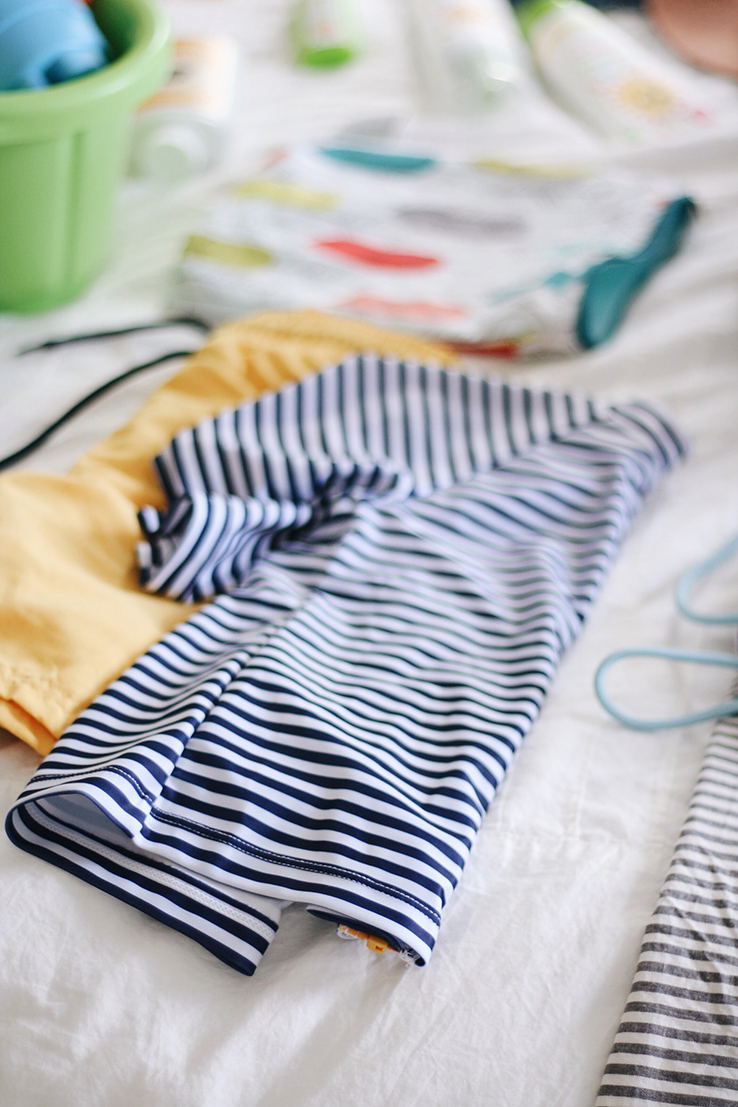 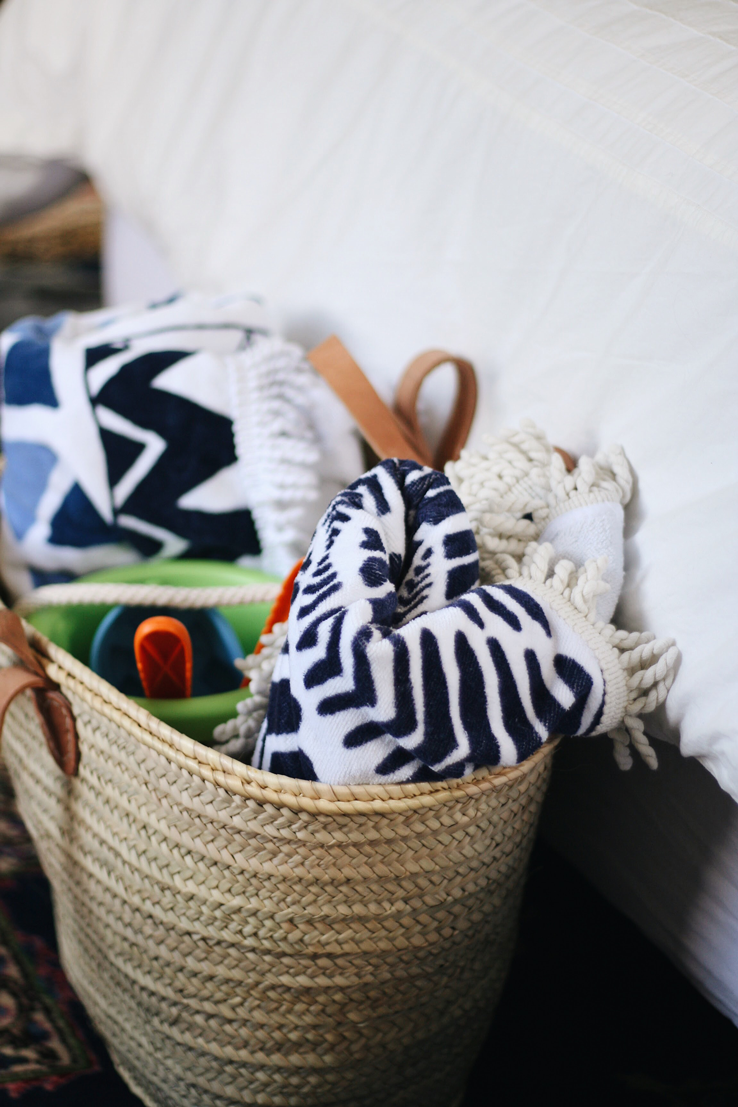 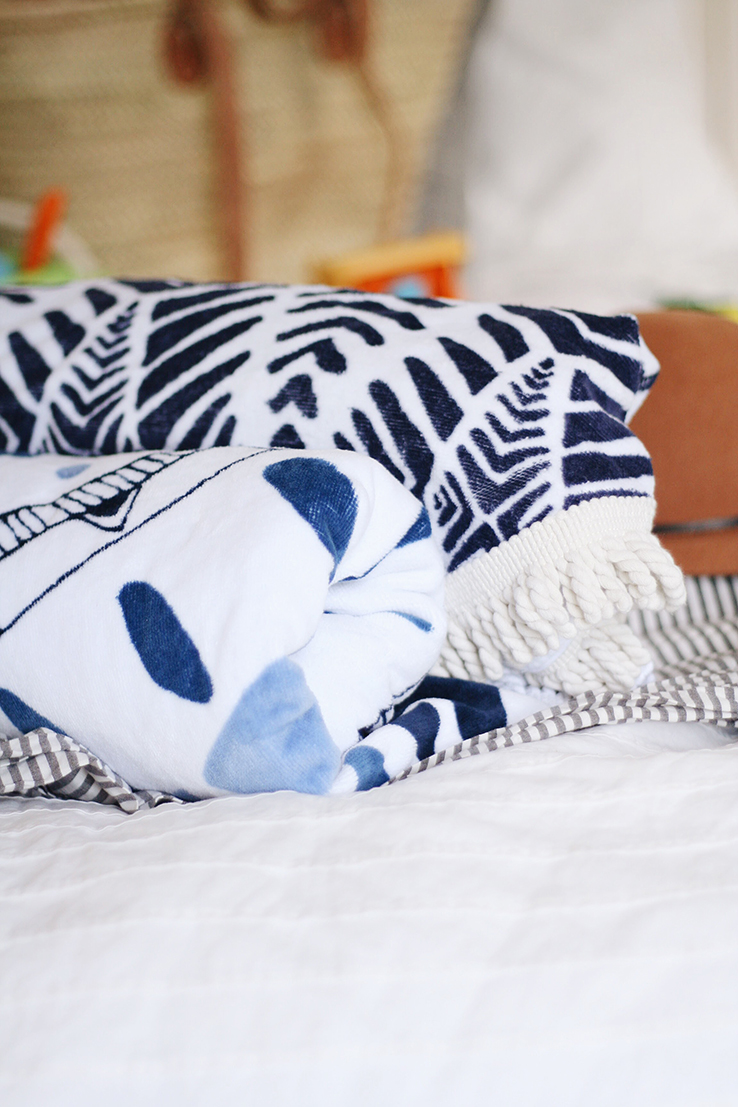 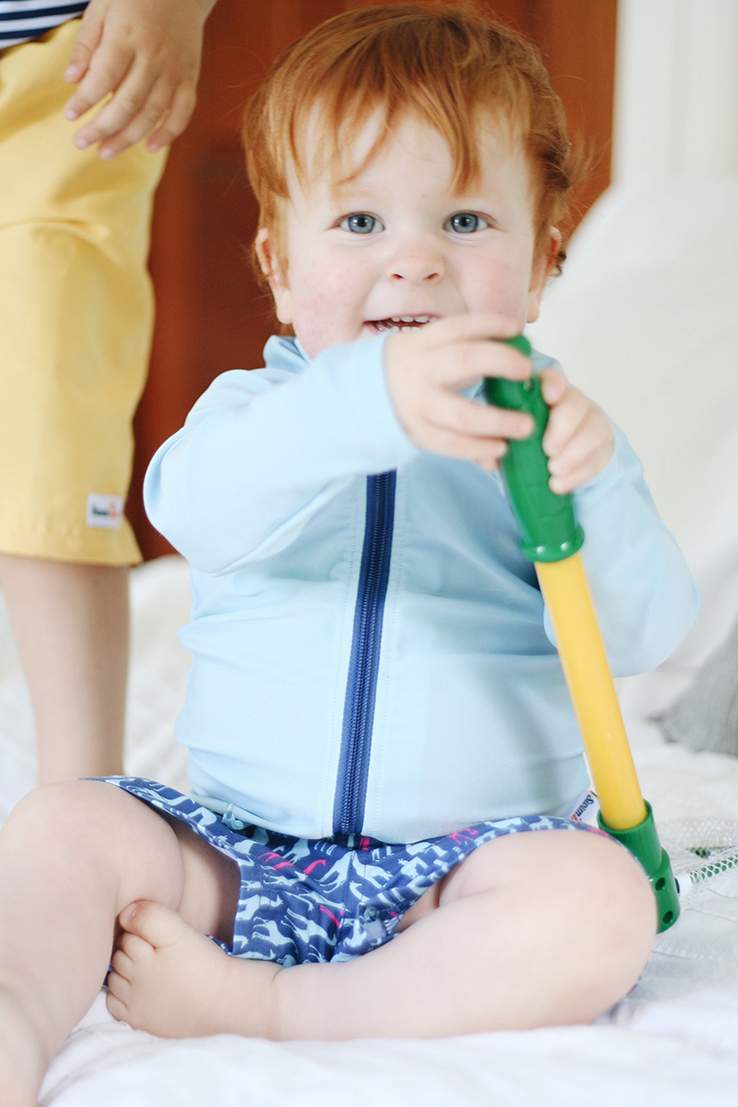 Back in mid June we headed out on a week long beach vacation with some family. Me being well me, I started making detailed packing lists for each family member a couple weeks out. I had never been to the beach with babies and well, list making makes *feel* me prepared… OKAY? :)

I new I could easily get carried away with it all and end up wanting to bring every last stinkin’ toy — especially if I heeded Wyatt’s desires — so I decided to create a simple list and stick with it. Also? Because I literally would forget my head if it wasn’t attached… so there’s that.

We already had most of the things I decided to pack, but there were a few things we needed to stock up on before we left like: sun tan lotion, and swimsuits that actually fit the boys.

I’ll skip all the intro babbling and get straight to it. Here’s a detailed list of what we packed: 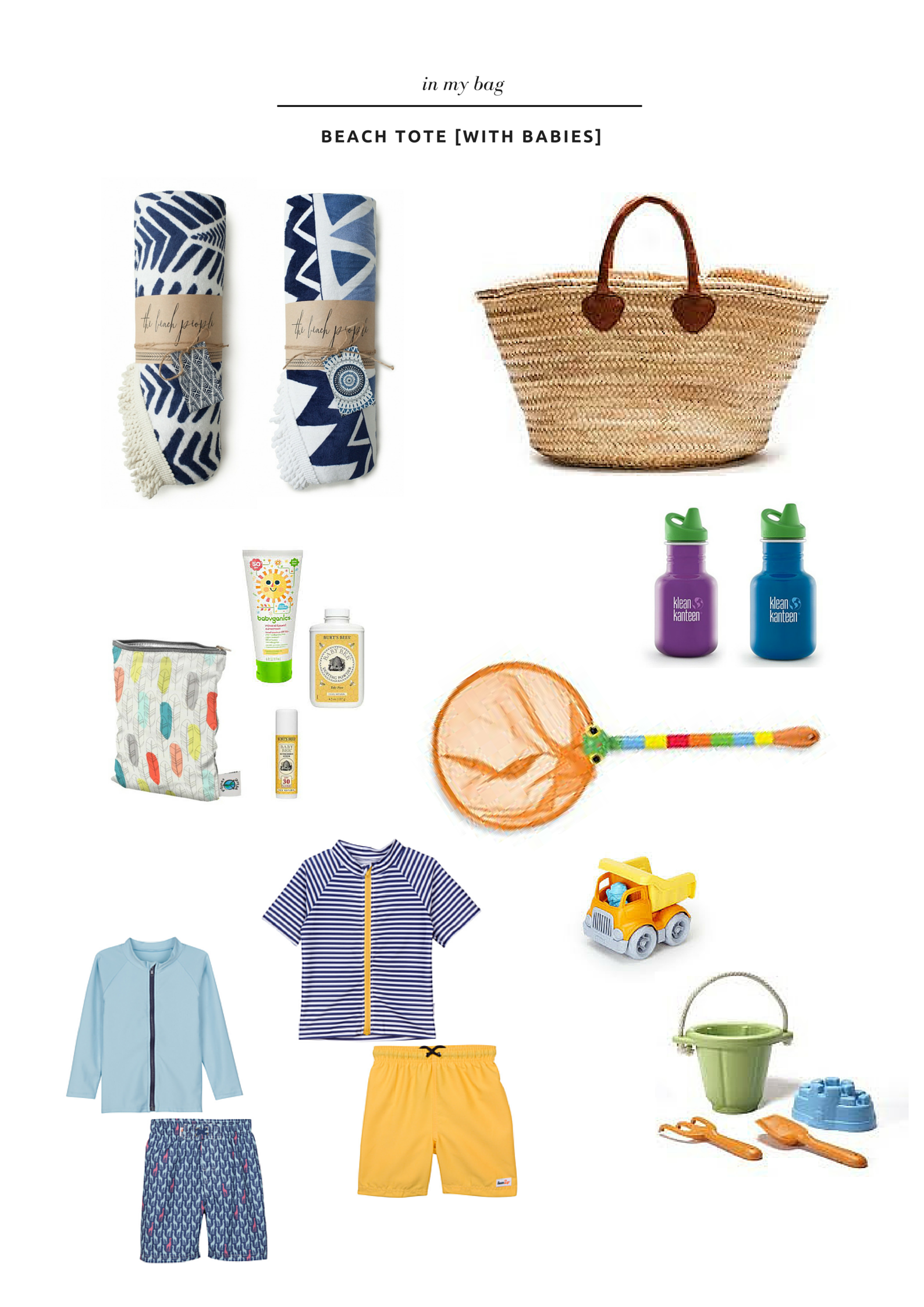 IN MY BAG [A BEACH TOTE WITH BABIES]

1 | Beach towels, c/o The Beach People.  These roundies made for the perfect “play pen” for Thurs — who absolutely refused to step foot in the sand. (Lol.)  And what was even more perfect was that they conveniently shared the same shape as the shade from our beach umbrella [which is something we also brought to the beach — but obviously did not fit in my bag. ;)]

2 | Swim diapers, we used these disposable ones but these re-usable ones look awesome

3 | Wet bags, (one for dirty diapers and another for cellphones, etc.) I love these by Planet Wise and have had this one since Wyatt was born. I got another (this one) after Thurs was born so as to hold twice the soiled clothes and dirty diapers, which was a good thing because he is a stinkin’ mess most of the time!

4 | Sunscreen lotion, after digging around on EWG’s Skin Deep site and a few other places I decided on this lotion for both the kiddos as well as myself and Nick. I also got the spray version, which Nick and I ended up liking better for ourselves. Even though it didn’t have as desirable ingredients as the lotion version, it was much more lightweight and absorbed better which seemed to make us sweat less of it off — which is kind of the point.

5 | Sunscreen face stick, we’ve used the Burt’s Bees face stick since Wyatt was an infant and I have nothing but good things to say about it.  I also got the Babyganics version for this trip as well. I like it’s shape better for application on the cheek region, but less for the nose/eye region.

6 | Baby powder, do you know about the wet sand + baby powder trick?! I learned about it last year and finally was able to try it out on this trip.  Works like a flippin’ charm! AND came in real handy when I learned that Thurs kinda-sorta hates sand. Lol. I had this one on hand, so that is what we brought!

7 | Water bottles, I bought these Kleen Kanteen bottles for the boys last year.  I wanted to have something that was more conducive for on the go — a.k.a I had one of these wonderful Lifefactory bottles break on me in a grocery store when Wyatt decided to chuck it from his high perch in the cart. Yaaaaaaay… I LOVE these kid friendly kanteens and have people ask me about them all of the time.  Right now we have the sippy spouts, but you have the option of buying other lid options so you can use them in the future.

8 | Toy bug net, we brought one that Wyatt got for his second birthday but this one looks similar — and I love Melissa and Doug toys. :) The boys had a blast trying to catch all kinds of critters with these!

9 | Toy vehicles (conducive for sand digging), Wyatt is OBSESSED with construction vehicles so we were sure to pack those which conveniently enough made fantastic sand digging toys.  I had enough forethought to only bring the ones that were mostly smooth with minimal nooks and crannies (pretty much all Green Toys) but wish I had still brought a few more that were designated for just “inside play” instead of trying to make all of them work double duty and and having to wash sand off of them every time we went in and out…

10 | Toy sand bucket + tools, we have some gardening tool toys for the boys at home but since we live absolutely nowhere near any ocean, and therefore sand, we did not have any sand toys.  So I picked up two of these off Amazon.  You can definitely get them cheaper pretty much anywhere you go, but I didn’t want to buy something that would just break or that was questionably cheap.  I think these were the perfect set, they will still be around for next year’s trip and in the meantime they are using them to dump all of the water out of their kiddie pool. ;)

11 | Snacks: we kept it simple by packing easy to eat fruit (like grapes, blueberries strawberries and clementines), fruit leather, cheddar bunnies or pre-popped popcorn. And LOTS of water.

12 | Sunglasses, mine are just some cheap-o $5 pair from Kroger (which I didn’t end up even wearing a whole lot). I’ve never spent more than $5-10 on a pair of sunglasses because I always lose them.  But I got to thinking the other day and I’m pretty sure the only reason I loose them all of the time is because I only spend $5-10 on them. Ironic, right? For next summer I have my sights (hahaha) set on these, as well as this sleeve to protect them from scratches.

OTHER (STUFF WE WERE WORE)

13 | Swim cover up, I used an old shirtdress from Target that had shrunk with one too many washes. They have one similar again, but I also really like this one from Nordstrom (made in USA), and this one that I’m hoping to replace the other now-too-short denim shirtdress with sometime next year.

14 | Swim suit, I realized at the beginning of this summer that I had not bought a swimsuit in almost 4 years. (!) With all of the body and size changes I’ve experienced with two pregnancies and nursing on an off for the last three years, to me it just seemed pointless.  I had one that saw me through it all, but consider it more of a “honeymoon appropriate” swim suit as opposed to a “running after toddlers who jump and tug on you appropriate” — haha! This year I decided it was time and I found this great top and bottoms.  If you’re looking for something with even more coverage, I think this suit (made in the USA) or even just these bottoms paired with a top you already have would be great options!

15 | Boy’s swim suits, c/o SwimZip. All I can say is that these little suits are awesome! The boys each had two suits that we brought to the beach (one SwimZip and one from Target they each received via birthday gift from Nana.) They both asked to wear their SwimZip ones the entire trip!  To me a rash guard is essential for a full beach day to keep from getting burned but also staying cool — and with Thurser being so fair I even opted for a full length sleeve rash guard for him. (So glad I did!) The zipper definitely made it easier to get their tops on and off when wet. (On Wyatt, on Thurser.)

16 | Sandals, nothing special over here! We packed the ones we already had. Nick mentioned something about it might make sense to get them water shoes, but I opted to not buy them simply just because I didn’t think they were necessary. They did just fine with the sandals they already had, so I’m labeling it a good call!

17 | Tote! (duh?), c/o Medina Mercantile.  In case you’ve been living under a rock, these ‘market totes’ are everywhere right now.  Every shape, every color, every price point, you name it. I loved the idea of having a summer catchall bag for all the extras that are toted around for warm weather and for the farmer’s market — but I really didn’t like the idea of buying one from Target for some reason.  I dug around a little on the internet and found, what I think, to be a better option from Medina Mercantile and reached out to them. Medina Mercantile works with artisans all over the world to support artists and crafts people directly — women’s cooperatives in Bangladesh, farmer artisan weavers in Morocco, and local artists close to their home in the Blue Ridge of Virginia.  I’ve been using the this market tote for about two months now and am in love with the quality and the fact that it just swallows everything that I want or need to ‘tote’ around — no strategic packing required. ;)

What revolutionary thing did I miss on this list? We’ve actually already begun planning another beach vacation with my side of the family for next year, so do tell!

This post is in collaboration with SwimZip and Medina Mercantile. All thoughts, opinions and selections are entirely my own.  Thank you for supporting brands that make The Lovely Laura Life possible. :)

In My Bag | At the Hospital with Baby #3

In My Bag | [No-Makeup] Makeup Bag