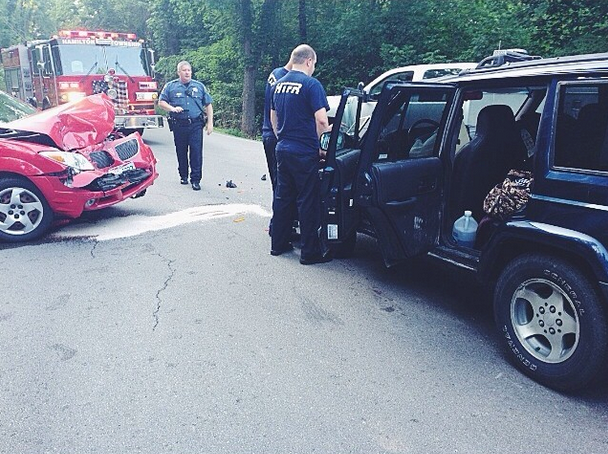 Recent post on Instagram, follow @lovelylauralife
This past Thursday, on our way to dinner with some friends, we were hit by an on coming car. I irregularly write to Wyatt via an email account I created him before he was born.  (I blantantly stole the idea from this Google commercial.) I wrote this to him on Friday morning and wanted to share with you…

Last night you were in your first car accident. You, joyfully, were just fine. Terrified and screaming at first, but calm and happy again within seconds.

You will understand some day, but your Dad and I. Could not. COULD. NOT unstrap ourselves from our seat belts and hurl ourselves back to GET YOU OUT of your carseat fast enough. There are no words for the frenzy and the fury I felt.  But I was sure to let the guy who hit us know that you were in the car.  He (the poor guy) ran up to our car and said “Is everybody alright?!” To which I responded, “No we’re not all right, my son is in the car!!!”

I calmed down after that.

Adrenalin was high and everyone was fine. Old Blue saved us. Again.

We were hit by an on coming car that was trying to turn left.  They instead turned straight into us. There was no time to react. I did hit my brake, but I think we were already crashing into them.  The air bags deployed so your dad’s and my faces are a little worse for wear.  Your dad has a good bruise on his leg. And is a little sore.  But by the grace of God that is all there is to report.

I know it sounds silly, but your resiliency inspires, encourages and empowers me.  Yes, I know you had no real concept of what happened last night. But you did experience it.  And now you’re just happy. To be alive.

It is a great thing to have that in my life.  Because I have to turn away when I think of how last night could have ended.

You teach me to trust God more everyday.

I love you Wyatt.

That Time You Prepared for Everything

The Real Thief of Joy