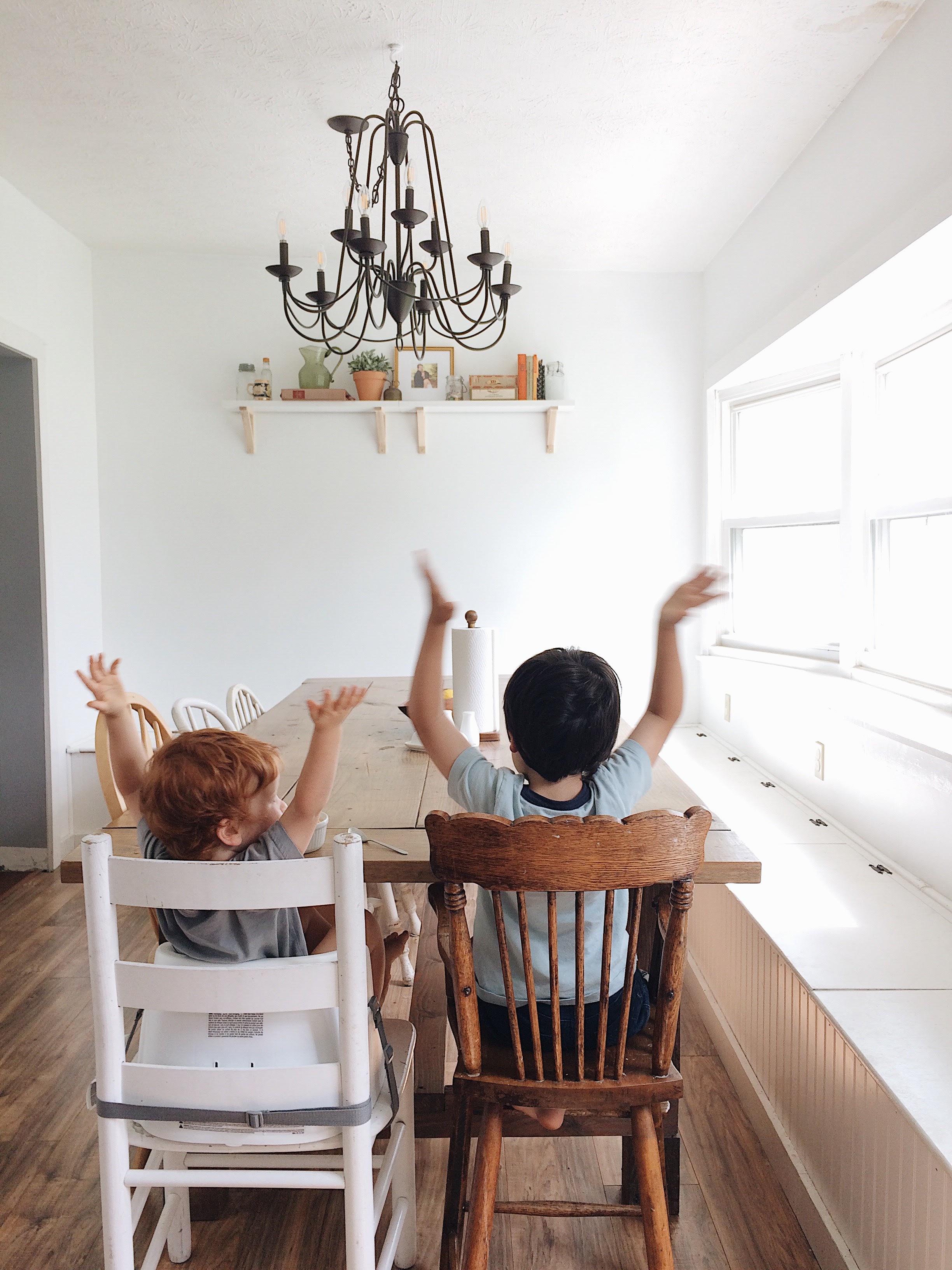 “Hey guys? Do you want to help mommy?”

It was early, the sky hinted a grey day was in store.  I needed to get breakfast on the table but not before I tackled the balls of fur scattered about the kitchen floor. The ones that swirled in the wake of the boys as they ran past me squealing with glee of a new morning.  I grabbed the broom and the dust pan from the laundry room and set to work, fighting the never ending fight that is two furry dogs in the heat of summer.

“Do you see the two big tufts of fur under the kitchen table?” I beckoned after the boys. They paused their morning lap around the house to look at me, and then at the two distinct clumps of dog hair under the table.  “Can you each grab a piece of hair and throw it in the trash can? That would be SUCH a big help!”

“Okay mommy!” they cried.  The quickly attended their task, but then, almost just as quickly Wyatt derailed.

“I can’t do it!” he whined. “The chair is in the way!”  He then dramatically flopped both his butt and hands on the ground.

“I do it!” chirped Thurser. Unwilling to give up quite so easily, he slid the chair out and away, clearing an easy path under the table to the tufts of fur.

I glanced around as I continued to sweep, Wyatt had disappeared. Thurser made fast work of the first clump of hair: he snatched it from under the table, hopped to his feet and, staring at the fur in his hand the whole way, trotted his little toddler self to the trash can to throw it away.  He then made his way back to the table and began his descent, this time showing great caution as he ducked under it so as not to bump his head. He slowly shuffled farther underneath the table until he was able to reach the one wisp of hair that was left. Carefully, he then reversed his actions until he successfully made it out from under the table unscathed.  Just as he did so Wyatt reappeared, only to swipe the prized lock of fur right out of Thurser’s hands.

“I’m going to throw it away” declared Wyatt.  Thurser began to cry.

Sometimes I’m amazed at my children, and not in the awe inspired sort of way.  Sometimes it’s more of a, “What the…?” way. Sometimes is more of, “Uhhhuhuh, uh what now??” way.  But today? Today was definitely a, “Are you freaking kidding me right now?!?” way.

“But I want to throw it away!” He threatened to pitch a fit.

Stomping theatrically back to Thurser, he let a growl-scream rip from his belly and then shoved the fuzzball into Thurser’s face. Wide eyed, Thurser gingerly took it in his hands.

Really? I thought.  This is what our morning has been reduced to?  Full blown tears over two tufts of fur??

“Wyatt, we don’t steal things out of people’s hands.  Thurser worked hard to…” I began to explain to Wyatt.  And then, taking me completely off guard, Thurser gently offered the (now even tinier) wisp of hair back to Wyatt.

I felt just shy of flustered.  “No.” I stated to Thurser, with clear indignation and disbelief in my voice.  Why, after all of that is he just giving it back to him? Thurser was so upset before. That is not how we act. What would I be teaching Wyatt?

And that’s when I saw it.  Thurser’s bottom lip wrinkle and pout.  Tears pooled in his brilliant blue eyes, nothing but my own lack of grace reflecting back at me.  It swept over me quickly, the realization of my own wrong doing, and I felt as if though I couldn’t recover fast enough from it.

“Oh Thurser. You’re so good! So good baby, look at you you! Wanting to make Wyatt happy above all else! You’re such a good brother Thurser. I’m so sorry baby.”

“You said no to me!” he stated confidently through tears.

I felt my face fall with remorse for how I let my tongue speak with haste. “I know.” I started quietly. “I’m sorry Thurser.  Mommy didn’t think it was fair for Wyatt to get to throw it away after the way he acted, after you stayed so positive and determined. But you know what?  It doesn’t matter, because you are choosing to show Wyatt love above all else and that is SO good Thurser!

I pulled him in close for a hug and I felt his little body melt into mine, his head nestling into my shoulder.  I closed my eyes, took a deep breath and let the weight of what really had just happened sink deep into my bones.

Over the last three months during my absence from here I can tell you confidently that I aspired to create countless blog posts: drafting several in writing,  planning several more in my head and dreamed up perhaps dozens more. I’ve learned that I in fact “write” all of the time.  While I drive to pick up the boys after a challenging day at work and while I cook dinner at half past witching hour.  While I pee amidst prying eyes and while I’m inspecting strawberries in the produce department.  While I’m giving the boys baths and while we’re taking a family walk through our woods. While I’m buying diapers on Amazon and while I’m picking out a new plant at Lowe’s.  While I’m telling Wyatt to stop picking fights with his brother for the one hundred thousandth time and while they are both passed out after a long day in our quiet dark bedroom, one in each of my arms, and I am overcome with love and gratitude.

Somehow, I’ve realized, this has left me feeling like I’ve failed.  Or at best, as if though I continue to fall short.

Not following? Then take a short trip with me to Perfectionist Land, because here things are almost always black or white.  We know nothing of this “grey” you speak of… Or maybe it’s just all really, really grey…?

I mean what do I really have to offer?  If I can’t do it right — manage to work/write something meaningful AND keep the boys from killing each other, do every last bit of laundry AND take the boys on an adventure, stay up late to pursue dreams and different looking futures AND be the loving, attentive wife my husband deserves — then I must be doing something wrong.  And before I continue (and risk doing it wrong again) I have to figure out how to do it right.  Except there doesn’t seem to be an obvious right. So I don’t do it at all, and procrastination takes hold.

Where have I been for at least three months? Here, in this gripping holding pattern. I’m still not sure exactly how I got here, but I know how to get out now.  All thanks to two flipping tufts of hair.

Because grace and love are. They are enough. And they are all that really matters.

Because grace and love are.  They are enough.

I stumbled upon this quote a few days ago and it’s almost sort of haunted me since then:

“Start where you are. Use what you have. Do what you can.” – Arthur Ashe.

I can hardly explain it in words, but reading this quote felt like a lifeline of sorts and it gave way to this large word dump I’m about to call a blog post (so there’s that).  But it feels like the right way end this stream of thought and to begin to break out of his holding pattern I don’t want to be stuck in anymore.

Are you here with me today? Are you in this same holding pattern? Gripped by all the failures and your fear?  So paralyzed by perfectionism you won’t even try?  Well I’m here. I’m here right beside you.  And I want to tell you again that I will never be enough. You will never be enough, but you don’t have to be either.  Because grace and love are. They are enough.

Why I Love Wearing My Babies

9 Postpartum Worries I Wish I Had Kicked to the Curb